NEW YORK (RNS) When blind Chinese dissident Chen Guangcheng made a daring escape from house arrest this spring and found refuge in the U.S. Embassy in Beijing, he instantly became a popular hero in the West and a rallying point for human rights activists everywhere. 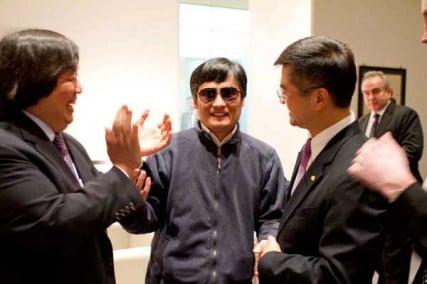 U.S. Ambassador to China Gary Locke, right, meets with Chinese dissident Chen Guangcheng, center, at the U.S. Embassy in Beijing, China, on May 1, 2012.

For abortion opponents in the U.S., however, Chen was much more than that: he was an icon of the pro-life cause, a man whose campaign against forced abortion in China made him a potent champion in the fight against legal abortion in America.

Anti-abortion groups in the U.S. regularly cited Chen in their press releases and fundraising materials, using Chen’s plight – and the slow pace of the diplomatic negotiations that eventually brought him to safety in New York – as fodder for promoting their cause and galvanizing opposition to President Obama.

Conservative media critic Terry Mattingly even detected a secular bias in the news coverage, complaining that reports were ignoring the fact that Chen “is actually a pro-life activist” and a “Christian activist who sees China’s often brutal one-child policy as a violation of human rights as well as religious liberty.”

[Mattingly later walked back his criticisms, saying “It appears that we can strike the word 'Christian'” from Chen's biography.]

But the reality differs significantly from the scenario laid out by Mattingly and others: for one thing, Chen Guangcheng is not a Christian, and, more notably, he may not even be what most abortion opponents would consider “pro-life.”

That’s because Chen’s cause in China was not an effort to halt legal abortion per se, but to make Chinese authorities comply with their own laws against forced abortions and sterilizations, a position also advocated by the Obama administration.

“If it’s not forced abortion, I don’t think he’s necessarily against that,” said Bob Fu, a Chinese-born Christian and close friend of Chen who heads Texas-based China Aid, which lobbies for religious freedom in China.

Chen would not oppose “voluntary abortion,” Fu said, since Chen’s focus is on “the rule of law” – on making China a society that respects its own laws, which are routinely flouted, and on promoting the human rights and dignity of its citizens.

Indeed, in Chen’s two principal public statements since arriving in New York on May 19 – an interview with CNN’s Anderson Cooper and an op-ed in The New York Times on Wednesday (May 30) – Chen himself did not mention abortion. Instead, he repeatedly stressed that the “fundamental question the Chinese government must face is lawlessness,” as he wrote in The Times. “China does not lack laws, but the rule of law.”

Chen was initially targeted by Chinese authorities in 2005 after he filed a class-action lawsuit on behalf of poor, rural women who said they were subjected to forced abortions and sterilizations as part of China's one-child policy. That landed him in jail until 2010, and he was then placed under house arrest, which he escaped on April 22, injuring his foot but still managing to reach the U.S. Embassy.

That prompted an international crisis that was only resolved when Chen and his wife were allowed to travel on student visas to New York, where he has pledged to continue speaking out for the rule of law in his homeland.

“In the U.S., ‘pro-life’ connotes opposition to abortion, per se, so Chen isn’t an anti-abortion activist in the U.S. sense,” as Lindsay Beyerstein wrote in the online magazine Religion Dispatches.

Fu echoed that point. “It’s very hard to place him (Chen) in a category here.”

Still, that hasn’t stopped some abortion opponents from trying.

“Obama administration abandons Chinese pro-life activist Chen,” ran a headline at the Right Wing News site at the height of the diplomatic standoff in May. “Chen is not the kind of activist that American authorities would have wanted to help,” blogger Julio Severo wrote at LifeSiteNews. “Barack Obama and Hillary Clinton are shamelessly pro-abortion, while Chen is pro-life.”

The National Right to Life Committee has cited Chen in fundraising appeals, telling supporters that nothing they contribute “will cost nearly as much as what brave activists like Chen Guangcheng have been forced to give.” And Tony Perkins of the Family Research Council welcomed news of Chen’s flight to New York by hoping that “Chen's influence extends to his new home, where the inhumanity of abortion is so often ignored.”

Whether Chen can avoid being swept up in America’s culture wars and election-year battles is unclear. Marjorie Dannenfelser, head of the Susan B. Anthony List, told The Washington Post that she is unsure of Chen’s general views on abortion, adding: “What we will not do is take his suffering and his family’s suffering and use it for a cause he doesn’t believe in.”

Chen’s advisers have also been counseling him on how to avoid the political pitfalls, especially as he continues to recuperate from his foot injury and from the toll taken by years of confinement and abuse.

But he has already been asked to tell his story in Congress, and friends say Chen has been swamped with invitations to speak at anti-abortion rallies and to churches and religious groups.

“In the end, though, he’ll have to decide what he’ll want to say,” Jerome A. Cohen, co-director of New York University’s U.S.-Asia Law Institute and a friend and adviser to Chen, told the Post.

Chen may even wind up being more supportive of religious groups and abortion opponents than his record so far indicates. Fu noted that almost all of Chen’s friends in China were Christians who faced government repression, and said Chen himself might be considered a believer in “natural religion.”

“He’s sort of a natural pro-lifer,” Fu added. The question is whether that will be pro-life enough for American pro-lifers.