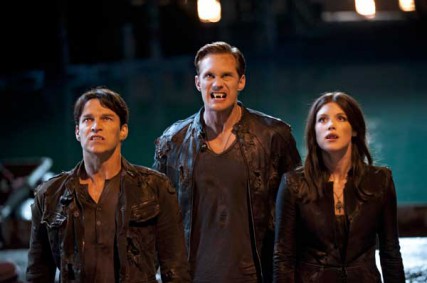 In its fifth season — which happens to coincide with a U.S. presidential campaign —”True Blood,” returning Sunday (9 p.m. ET/PT), explores political maneuverings in the vampire realm between The Authority, a mainstream group that seeks accommodation with humans, and the Sanguinistas, fundamentalists who believe mortals are simply food for their vampire superiors.

“We wanted to play with the politics/religion angle, since that seems to be something that never stops,” creator Alan Ball says. “Some of the things being said by some people during the Republican primary were so horrifying to me that I thought, 'What if vampires wanted a theocracy? What would that look like?' Whenever anybody thinks they know what God wants and wants to apply that to government, whether Americans or the Taliban, it's kind of a terrifying thing.”

Christopher Meloni, known for his long-running role on “Law & Order: SVU,” plays Roman, the powerful, mesmerizing and corporate-looking Guardian of The Authority. “He's a vampire wanting to change the system, fighting against what he sees as fanatics. He's a man interested in coexistence. I think he's a forward-thinking guy,” says Meloni, “this supreme example of a man of authority, and yet there are certain moments of him that are surprisingly childish.” 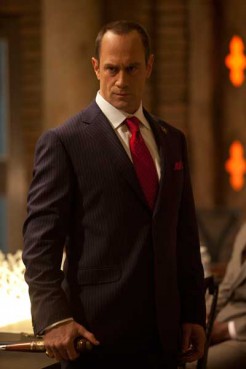 TRUE BLOOD episode 50 (season 5, episode 2): Chris Meloni.  On HBO’s “True Blood,’’ politics is literally a bloody business. The show’s fifth season, which coincides with a U.S. presidential campaign, returns Sunday. “We wanted to play with the politics/religion angle, since that seems to be something that never stops,’’ creator Alan Ball said.

Coexistence has long been a show theme, and an especially tricky prospect in a world populated by humans, vampires, werewolves, faeries and shape-shifters. Roman holds the power of life or death over vampires Bill (Stephen Moyer) and Eric (Alexander Skarsgard) after they killed The Authority's representative in Season 4. The two rivals now must join to try to save their lives, offering their assistance in catching the suddenly resurrected vampire Russell Edgington (Denis O'Hare), a thorn in The Authority's side.

“Russell is a pretty powerful vampire. He really represents chaos and anarchy. That is the one thing that my character just disdains, both personally and professionally,” Meloni says.

For Skarsgard and Meloni, the union of Eric and Bill represents a twist in the characters' relationship. They must work together or die the vampire's True Death.

“Steve is a really close friend of mine, and I really enjoy the bromance,” Skarsgard says. “Eric hated Bill. He thought Bill was insignificant, a young, naïve vampire. Suddenly, he's in a position where he cares about this guy. He protects him and saves him. That's definitely something new for Eric.”

And this time, Moyer says, it's not just personal. “At different times in the past, things were about stuff going on for them individually. This is on a different level. This is global,” says the actor, who's married to co-star Anna Paquin. “They're not just thinking about themselves.”

This being “True Blood,” which is based on Charlaine Harris' novels, vampire politics is hardly the only story. Sookie (Paquin) must deal with the aftermath of the shooting of best friend Tara (Rutina Wesley) and her retaliatory killing of Tara's assailant. “That sets up an entire universe of problems for Sookie, aside from the fact that she has no idea if her friend will live or die,” says Paquin, whose character covers up the shootings. “There are a lot of built-in problems to clean up.”

And, there is the matter of the love triangle of Sookie, Bill and Eric. Sookie, whose faerie blood is irresistible to vampires, turned down both suitors last season. (The show has had to undertake some creative shooting to hide Paquin's pregnancy, which is not part of the story line.)

Sookie “can't make her mind up and doesn't want anyone to be hurt, so she's walking away. It's horrible and painful and sad,” Paquin says. “But she's never had a chance to stand on her own as a real grown-up. She's giving it a go on her own. It doesn't necessarily go well, because she's Sookie.”

The trio's paths will cross again, especially considering the return of Edgington. “Russell would be a common enemy,” Ball says. “He wants Bill and Eric dead since they put him into the ground, and he wants to drink Sookie's blood so he can walk in the sun again.”

The fifth season of the series, which averaged about 5 million viewers an episode last year, is structured a little differently. Instead of one central villain, the threats will be more dispersed. And Ball believes “True Blood” has another season in it after this one, but leaves the future open beyond that, pointing out that Harris has written 13 books in the series.

The show, which juggles humor, sex and violence, has a darker tone this year, too, Moyer says. “I don't think it's as frothy or quite as camp as it usually is. It feels like it's very serious this year, but I don't mean that in a pejorative way,” he says. “It feels like there's more at stake.”