SALT LAKE CITY (RNS) Twenty years ago, who would have predicted the 2012 U.S. presidential race would pit a black incumbent against a white Mormon? 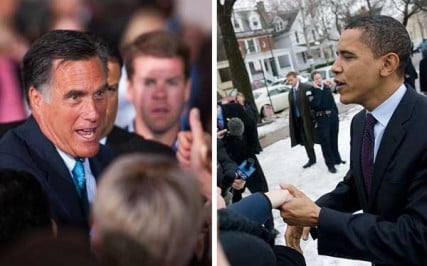 (Left) Governor Mitt Romney during a campaign stop in Philadelphia. (Right) Obama greets friends and neighbors as he arrives to vote at his polling place in Kenwood.

“I’ve been black my whole life and a Mormon for 30 years and never thought either of these (candidacies) would happen in my lifetime,” says Utah attorney Keith Hamilton.

“This is a day that all Americans should take some solace in — that things are changing. Regardless of who wins, this sends a message to our children.”

Darius Gray, former head of Genesis, a long-standing support group for black Mormons, sees this historic choice between two members of traditionally outsider groups as evidence of a “marked change for this nation, a maturing too long in coming. You can take joy that both groups are now players on the scene.”

Unlike white Mormons, the vast majority of whom side with Republicans, African-Americans overwhelmingly vote Democratic. So black Mormons look at Obama, the Democrat, and Romney, the Republican, and find themselves caught between political perspectives: Many still lean liberal, others have switched parties after joining the church, and some find themselves going back and forth.

Not so long ago, there were very few black Mormons even to consider.

Until 1978, the Church of Jesus Christ of Latter-day Saints barred blacks from its all-male priesthood. After that landmark shift 34 years ago, missionaries found some success winning black converts, but African-Americans still represent only about 3 percent of the Mormons' 6 million U.S. members.

Of course, few people cast their votes primarily on the basis of race or religion. But many weigh whether a candidate’s personal story, politics and perspective match their own.

“Having President Obama in the White House has done so much for race relations, which anyone who knows me is aware that this is one of my greatest passions,” said Marvin Perkins, the Mormon co-author of the “Blacks in the Scriptures” DVD series. “In the last election, I voted for Obama, not because he was African-American but because he was clearly the better candidate.”

Today, Perkins is not so sure that remains true, particularly in light of Obama’s recent support of same-sex marriage, which his LDS church opposes. Now that there’s a Mormon candidate, Perkins likely will go the other way — not because of Romney’s Mormonism, he wrote in an email from Los Angeles, but because they share the same values.

Not every black Mormon connects with Romney — or Obama, for that matter. And Hamilton, who explored reasons for the LDS church’s pre-1978 ban in his memoir, “Last Laborer,” said he cannot relate to either man’s biography.

“Like Obama, I am an African-American and an attorney, but he lived a life very different than mine,” Hamilton said. “As a Mormon, I don’t have anything in common with Mitt Romney, except we both try to live our beliefs.”

Romney is a multimillionaire with several homes, he said. “I don’t know how Mormons like that live. I don’t know what they do for service projects.”

Hamilton voted for Obama before and likely will again — despite the president’s position on same-sex marriage.

“I agree with the LDS church’s position that marriage is ordained between a man and a woman, but it is not my business who gets married under man’s law,” he said.

Rob Foster, the first black student-body president at LDS church-owned Brigham Young University, also rejects single-issue — or identity — voting. He, too, has similarities and differences with the candidates.

“Brother Romney, he’s a BYU grad, LDS, temple-endowed member. But my social views are probably different from his, due to my personal experience,” Foster said in a phone interview. “With President Obama, we might have similarities when it comes to things socially, but we can be different in other areas.”

Foster will base his vote on policy, chiefly health care.

For Brazilian-born Marcus Martins, a main issue is jobs.

Martins was one of the first black Mormons to be called on a mission after the 1978 announcement. His father, Helvecio Martins, who died in 2005, became the faith’s first black general authority.

Marcus Martins later moved to the United States, where he eventually taught at BYU-Hawaii. Last year he was called to serve as mission president in Sao Paulo, Brazil.

“What comes to my mind, as a voter, is my youngest son (age 24) who is part of a generation of intelligent, college-educated kids who can’t find a good full-time job,” Martins wrote in an email from Sao Paulo. “So, as significant as it may still be in our society, race for me is out, and economics is now center stage.”

The country’s many issues are urgent and complex, he said, and he hasn’t decided who will get his vote.

Mia Love, a black Mormon and conservative Republican, is running against Democrat Jim Matheson in Utah's newly formed 4th Congressional District. She has built her campaign on right-tilting principles and recently was endorsed by Romney’s son, Josh Romney.

Many other black Mormon women back Obama.

“I’m sure that a lot of people would expect that I would vote for Mitt Romney,” said Audia Wells, a human-resources consultant with a master’s degree from BYU and a member of the Atlanta LDS Ward, “but I voted for Obama in the previous election and will again.”

She supports Democratic planks in boosting social services and working-class Americans and wants a president who will address the needs of “people who look like me.”

Another Atlanta ward member, Bryndis Roberts, joined the LDS church in 2008, but didn’t convert her politics. Roberts is a lifelong Democrat who has never voted for a Republican.

As the second counselor in the ward’s female Relief Society, Roberts doesn’t bring her political views to church. But they are hardly secret.

“There’s not any room on my car for another Obama sticker,” she quipped in a phone interview.