(RNS) How much money does the U.S. government forgo by not taxing religious institutions? According to a University of Tampa professor, perhaps as much as $71 billion a year. 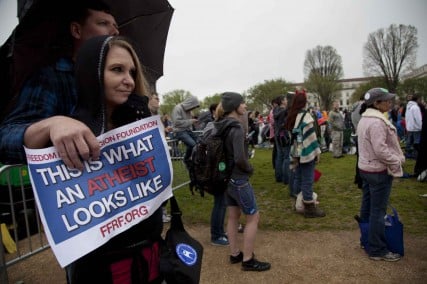 Their article appears in the current issue of Free Inquiry magazine, published by the Council for Secular Humanism, an organization of nontheists. U.S. tax law grants religious groups and other nonprofits the exemptions because of their charitable nature.

And while the authors do not claim theirs is a comprehensive or unbiased appraisal, their findings have raised eyebrows in the nontheist community, which has long sought to eliminate the tax exemptions on the grounds that they unfairly favor religious institutions.

“The issue of religious tax preferment is especially relevant now because the number of Americans living outside any religious tradition continues to grow,” said Tom Flynn, Free Inquiry’s editor. “That underscores the unfairness of taxing all Americans to subsidize religious institutions that only some Americans utilize.”

But Mark Rienzi, senior counsel at the Becket Fund for Religious Liberty, said that Americans have made a democratic decision that religious institutions are good for our communities — believers and atheists alike.

“Whether it is the Quakers opposing slavery, Reverend King arguing for equality, or a Catholic soup kitchen feeding and sheltering all in need,” Rienzi said, “our history is full of examples confirming the great public benefit of our religious diversity.”

If history is a guide, the Free Inquiry article and any call for tax reform it may engender are not likely to have much effect. Since the 1950s, there have been several attempts to quantify religious tax exemptions — all of them wildly varied in their conclusions — and only a handful of legal challenges to those exemptions. Most were unsuccessful.

“It is something lots of people have been against, but not very much has been done about it,” Flynn said. “Coming up with hard numbers has been so difficult. But if there are going to be good discussions about this, we need good data.”

Cragun and his co-authors — Stephanie Yeager and Desmond Vega — examined federal tax exemption laws, and some state and local laws, specifically in their home state of Florida. They conclude:

* States bypass an estimated $26.2 billion per year by not requiring religious institutions to pay property taxes.

* Capital gains tax exemptions for religious institutions may be as much as $41 million a year.

* U.S. clergy may claim as much as $1.2 billion in tax exemptions annually via the parsonage allowance.

But Cragun, who specializes in the sociological study of religion, said the article is not a call to completely revoke the tax-exempt status of religious organizations. Rather, he would suggest tax exemptions only for nonprofit organizations — religious or secular — whose services the government would have to supply if those organizations disappeared.

“It makes little sense for a group like the Red Cross to pay taxes because what they are doing is truly a benefit to all society,” he said. “But if we took religious organizations away, would the government say 'We really need religious-based charity, so we are going to step in.' I don’t think they would.”

Challenges by nontheists to religious tax exemptions have gained little. In 1969, the Supreme Court ruled in Walz v. Tax Commission of the City of New York that tax exemptions for religious organizations did not violate the Constitution’s Establishment Clause because they did not favor one religion over another.

But in 1988, the Supreme Court rejected a Texas state sales tax that exempted religious publications.

Other challenges have had little impact. the Freedom From Religion Foundation has twice challenged the parsonage allowance, so far to no avail. FFRF also supported a 1996 Colorado ballot initiative to repeal tax exemptions for nonprofits, including religious ones. It was defeated by a margin of 60 percent.

Sarah Barringer Gordon, a professor of constitutional law at the University of Pennsylvania, says religious-based tax exemptions date to the late 19th century and have always been controversial.

“People say we have always had these tax exemptions, but that is not true,” she said. She notes presidents James Madison and Ulysses S. Grant both opposed tax exemptions for religious groups.

“We have had them for a long time, but it is more complete and protective of religious organizations now than it ever has been,” she said.

Part of the problem is the complexity of tax laws, which vary by state and municipality. Another complicating factor is determining who owns what, as many religious groups own things under different names. Gordon, who is at work on a book about the history of tax exemptions for religious institutions, once tried to tally Catholic Church property in Philadelphia.

“I had to stop at 129 names” under which the church had holdings, she said.

Ed Doerr, president of Americans for Religious Liberty and former editor of Church and State magazine, said he thinks Cragun and his co-authors “rightly suggest that there should be some tightening up,” but he has little faith that will happen.

“In the political climate today, I don’t think anyone would be wise to bring it up,” he said.