(RNS) A breakaway traditionalist Catholic group on Monday (June 25) slammed as “clearly unacceptable” a Vatican doctrinal document that was supposed to lay the foundation for the group’s reconciliation with Rome.

Father Kevin Robinson distributes Communion during a traditional Latin Mass at St. Michael the Archangel Chapel in Farmingville, N.Y., June 17. The chapel is administered by the Society of St. Pius X.

The move comes after three years of complex negotiations between the Vatican and the Society of St. Pius X (SSPX), and was revealed just as Pope Benedict XVI appointed a high-profile American archbishop to a key post to oversee relations with traditionalists.

A letter by the Rev. Christian Thouvenot, secretary general of the SSPX, to SSPX bishops and regional leaders was leaked on the Internet on Tuesday (June 26). Thouvenot later confirmed its authenticity.

The letter says that the SSPX superior general, Bishop Bernard Fellay, told the head of the Vatican doctrinal office, American Cardinal William J. Levada, that “he couldn’t sign” the Vatican’s doctrinal offer during a meeting on June 13.

Benedict has actively sought reconciliation with the group since his election to the papacy in 2005. In 2009, he lifted the excommunication of the four SSPX bishops and started doctrinal talks in the hope of healing a decades-old rift within the Catholic Church.

The negotiations led to a Vatican proposal that was delivered to Fellay last September. The “Doctrinal Preamble” was aimed at overcoming the doctrinal differences between the Vatican and the group, which rejects the modernizing reforms of the Second Vatican Council (1962-1965), including church acceptance of ecumenism and religious freedom, and its rejection of anti-Semitism. 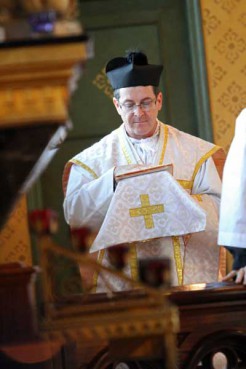 Father Kevin Robinson processes from the sacristy at the beginning of a traditional Latin Mass at St. Michael the Archangel Chapel in Farmingville, N.Y., June 17. The chapel is administered by the Society of St. Pius X.

In his letter, Thouvenot writes that Fellay proposed his own version of the Preamble last April which, “according to several agreeing sources,” seemed to “satisfy the Supreme Pontiff.” But he added that cardinals in Levada’s Congregation for the Doctrine of the Faith “amended” the text and it “now reintroduces, substantially, the propositions of September 2011.”

During his June 13 meeting with Levada, Fellay “immediately informed him that he could not sign this new document,” which he deemed “clearly unacceptable.” The SSPX will hold its general assembly in early July to discuss the issue.

Thouvenot also writes that Richard Williamson, the SSPX bishop who embarrassed the Vatican after he came out as a vocal denier of the Holocaust, will not be allowed to participate to the assembly on account of his “rebellion” and “disobedience.”

In recent weeks, there have been signs of a growing split within the SSPX, and the group’s other three bishops wrote to Fellay that they were opposed to an agreement with Rome.

The Vatican refused to comment on Thouvenot’s letter. Even so, Benedict signaled the importance he devotes to reconciliation with the SSPX by appointing American Archbishop Augustine Di Noia to the newly created position of vice president of the Pontifical Commission “Ecclesia Dei,” which is tasked with overseeing relations with traditionalist groups.

Di Noia, a native New Yorker, will work directly with Levada, and has worked with Benedict before and after his 2005 election, most recently as the No. 2 official in the Vatican’s liturgy office.

A statement by the Vatican doctrinal office stresses that the “broad respect” that Di Noia enjoys in the Jewish community should help alleviate Jewish fears that the SSPX would not have to accept the Vatican II document that rejected anti-Semitism as part of a reunion with Rome.