SEATTLE (RNS) In 1962, when my younger brother was just four years old, this city perched on the nation's northwest rim held a World's Fair that imagined a glistening future.

Grounded in a vision of science and technology, the Century 21 Exposition foresaw a steady economic expansion and an orderly modernity that would continue 1950s prosperity and stability far into the future.

They got the science and technology right. Seattle is now a world hub for software development and Internet commerce, as well as for the caffeine and jeans-clad lifestyle that fuel young techs.

Who could have foreseen the rest? President John F. Kennedy had to cancel an appearance at the fair's closing ceremony in October 1962 because of the Cuban Missile Crisis. A year later he was assassinated.

Although exposition planners were exuberant about the promise of science and technology, those restless fields have done more disrupting than perpetuating. Hardly any corner of American life has been left untouched, from the corner hardware store to the neighborhood school to assumptions about human life and how people work.

Meanwhile, the postwar world that America was harnessing for economic growth began to push back. Just as one implacable foe self-destructed, another adopted economic expansion and emerged as more powerful than ever imagined. Freedom-fearing terrorism targets the land of the free.

Now comes 2012. My brother got married on Saturday, escorted by his two accomplished daughters, surrounded by friends made in living here since college, as well as family. 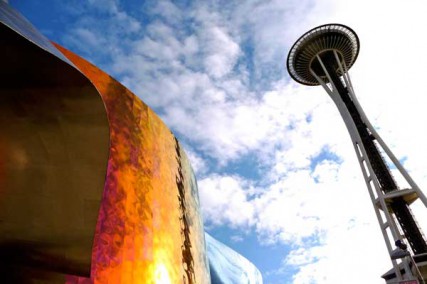 His employer -- the public school system -- is struggling. Boeing has moved to Chicago. Microsoft is fighting to regain its mojo. Urban infrastructure has fallen way behind tech-fueled growth. Racial unrest is explosive. But still groom and bride exchanged vows, sang a lovely serenade to each other, and set off on a new adventure.

Life, in other words, is more durable than fair planners' visions. They could build a Space Needle. But, when optimism subsided and funds evaporated, people continued to launch marriages, bring children into the world, and dream of a better tomorrow.

Even as Seattle's leaders ignored their own monorail and took the easy course of building the highways that now strangle the city, people found ways to form enduring friendships. They learned that living simply is OK.

Most of all, they allowed the divine to touch their lives. In what is arguably the nation's most secular city, people found the core meaning of an incarnate faith: people loving each other. They formed communities of remarkable diversity and acceptance. As religion struggles with who is allowed in, these church avoiders have opened their lives to each other.

Unlike many Americans, my brother and his friends don't bemoan the loss of 1962 or any certainties of that ebullient era. They press on, seeking new adventures, learning new skills, making new friends.

I once thought he stayed here for the outdoor adventures. But it's the people. What I see here is people living freely. No scowling at modernity, no pigeonholing the different, and no bitterness over life's inevitable and abundant failures.

(Tom Ehrich is a writer, church consultant and Episcopal priest based in New York. He is the author of "Just Wondering, Jesus" and founder of the Church Wellness Project. His website is www.morningwalkmedia.com. Follow Tom on Twitter @tomehrich.