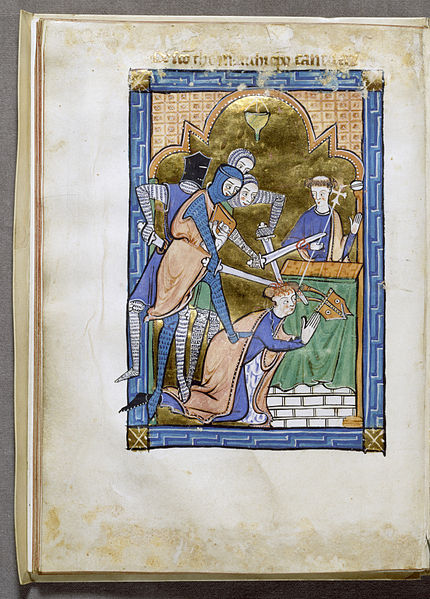 The Fortnight for Freedom is almost over, praised be its patron saint Thomas More, whose devotion to religious freedom did not stop him as Chancellor of England from burning half a dozen Protestant heretics at the stake. Next up is the Obama Administration's decision on its proposed rulemaking for exempting religious organizations from having to cover contraceptive services for their female members.

I'm pretty sure that nothing the Administration does will satisfy the Catholic bishops. In their response to the proposal, they say they want the exemption to apply not only to religious organizations but also to secular ones and individuals who object to contraception on conscientious grounds. Which means that the lawsuits challenging the mandate will go forward.

Chief advocate in those lawsuits is the Becket Fund, the conservative legal outfit whose eponymous patron is Thomas Becket, that other English Chancellor who after becoming Archbishop of Canterbury was murdered in his cathedral by knights of King Henry II–for, as the Becket Fund puts it, “his own defense of religious freedom.”

At this juncture, it's worth recalling the religious freedom issue that got Becket into trouble: the ancient power of bishops to police the criminal activity of those in holy orders–so-called “criminous clerks.” Henry felt he had the right to try them in his secular courts. Thomas insisted otherwise.

“Religious freedom” is a wonderful abstraction, but it really does come down to particulars: heresy, insurance coverage, criminal jurisdiction, etc. Personally, I can't help suspecting that the bishops' rage against the contraception mandate is actually displaced anger at losing their de facto power to decide the fate of sexually abusive priests.

The real lesson of the conviction of Mgr. William Lynn in Philadelphia last month and the impending trial of Bishop Robert Finn in Kansas City is that if church authorities don't behave like secular executives when confronted with a subordinate suspected of abuse, then they too will be criminally prosecuted. Archbishop Becket would have considered that an assault on his religious freedom. No one in America can do so anymore, Fortnight or no Fortnight.