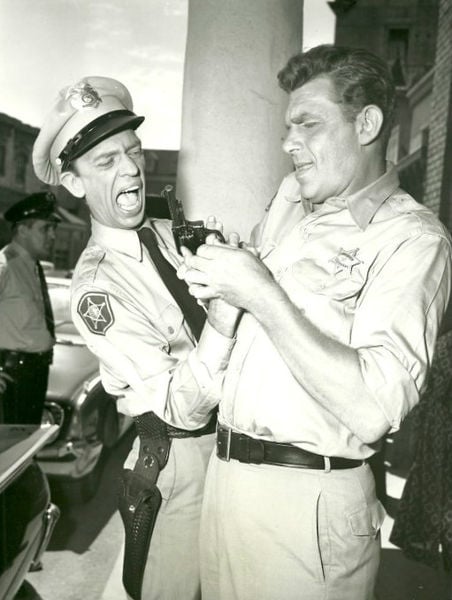 GetReligion's Bobby Ross, Jr. took a look at the MSM obits of Andy Griffith and unsurprisingly found them wanting in the religion department. By contrast, Ross notes, CBN quoted a statement from his widow, to the effect that “Andy was a person of incredibly strong Christian faith and was prepared for the day he would be called Home to his Lord.”

That doesn't get us very far, but it would certainly be interesting to know if Griffith's support for the Affordable Care Act and Democrats generally--something that annoyed his conservative Southern fan base no end--was grounded in his abiding faith. I'd like to have seen Ross make that point.

In any event, the role of religion in Griffith's life is less interesting to me than the place of religion in the Andy Griffith Show--a sort of Gilligan's Island of white Southern sweetness as far removed as imaginable from the reality show of the civil rights movement running concurrently. Race was the show's ghost, religion less so.

Mayberry had its preacher: Rev. Hobart M. Tucker of Mayberry's All Souls Church (of undetermined denominational identity). Played by William Keene, Tucker appeared in six of the show's 249 episodes--hardly a fair representation of the salience of religion in Western North Carolina but not too bad for religion-averse prime time sitcoms of the 1960s. His ministry was a mild send-up of the Peace of Mind spirituality of the postwar period. In one episode, Aunt Bea singles out his sermons on happiness for praise. In another, a guest preacher from New York all but puts the congregation to sleep with a sermon on the need to relax--perhaps not quite the right message for the sleepy little Southern town that time forgot. The road from Mayberry's pulpit leads straight to the Simpsons' Rev. Tim Lovejoy.

Perhaps the most heartfelt of the show's religious messages occurred not in church but on the sheriff's front porch. A businessman in a hurry has broken down in Mayberry and learns to his distress that nobody in town works on Sunday. Swaying in his rocking chair, Andy accompanies himself on the guitar as he softly sings "Church in the Wildwood." The businessman anxiously walks out the front door, lights a cigar, and begins to listen. Slowly he starts mouthing the words, and a beatific, far-off look comes into his eyes. He is at peace.