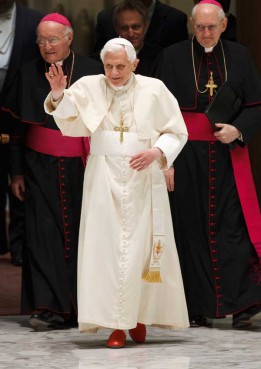 Pope Benedict XVI waves as he arrives to lead his general audience in Paul VI hall at the Vatican Feb. 8.

“Christianity, the world's largest religion, is rapidly expanding — by all indications, its future is very bright,” said MacCulloch, 60, professor of church history at Oxford University and an Anglican deacon. His latest book, “Silence in Christian History,” will be published in the fall by Penguin.

MacCulloch said in an interview that “there are also many conflicts” within Christianity, “and these are particularly serious in the Roman Catholic church, which seems on the verge of a very great split over the Vatican's failure to listen to European Catholics.” He predicted that Catholicism faces a division over attempts by popes John Paul II and Benedict XVI to “rewrite the story” of the 1962-1965 Second Vatican Council by portraying it as a “minor adjustment” in church governance, rather than as a “radical move to change the way authority is expressed.”

“Conflict in religion is inevitable and usually healthy — a religion without conflict is a religion that will die, and I see no sign of this with Christianity,” MacCulloch said. “But the stance of the popes has produced an angry reaction among those who want to see the council continue. No other church in history has ever made all its clergy celibate. It's a peculiarity of the Western Latin church, and it looks increasingly unrealistic.”

The Vatican's refusal to allow Roman Catholics to talk about married or female clergy was “not the reaction of a rational body,” MacCulloch said.

MacCulloch, a specialist in early modern history and a fellow of the British Academy, co-edits the Cambridge-based Journal of Ecclesiastical History and was knighted in early 2012 for services to scholarship.

Among numerous awards, he was the 2010 recipient of the Cundill Prize in History from Montreal's McGill University for his 2009 book “A History of Christianity: The First Three Thousand Years,” which was accompanied by a BBC television series.