But what if you don’t know what direction Mecca is?

Invented by London-based Turkish designer Soner Ozenc, the mat lights up when facing the Saudi city. 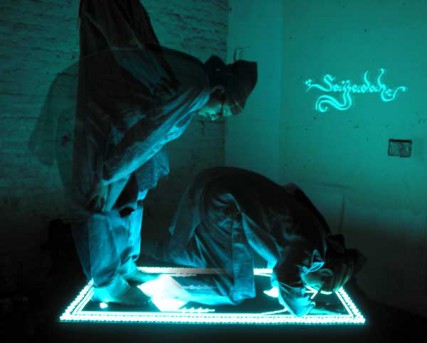 Invented by London-based Turkish designer Soner Ozenc, a new prayer mat lights up when facing the Saudi city of Mecca.

Currently, only two prototypes exist, one of which was purchased by the Museum of Modern Art in New York for its show last year on interactive design.

Ozenc is trying to raise $100,000 through Kickstarter.com, the online fundraising tool, to bring the mat into mass production. If he reaches his goal, for $500, donors can expect one of the first mats out of the factory.

“There have been no negative comments about it, except that the light is very strong and it could be distracting,” said Ozenc. “But there is an ‘off’ button on the side. You just turn it to ‘off.’”

Named EL Sajjadah — the “EL” stands for Electro Luminescent and sajjadah is Arabic for prayer mat — the rug uses an embedded digital compass to find Mecca based on the mat's current location, information the user gives to the mat’s tiny computer.

The whole mat, which is made partly of neoprene, doesn’t glow, but the designs do. “The mosque pattern was drawn pixel by pixel by looking at a small-scale model of Istanbul’s Blue Mosque,” Ozenc said.

What have Muslims done without such a smart mat?

Mosques worldwide have signs indicating Mecca's direction, and street signs and traditional compasses help Muslims outside a mosque to orient themselves toward the holy city.

Ozenc, 31, who prefers not to share his own religious beliefs, didn’t set out to design a prayer mat. Rather, working toward a master's degree in industrial design almost a decade ago, he began reading about flying carpets in literature. He also studied electroluminescence, the technology that makes his mat glow, and which he has incorporated into other of his designs, including a wall clock and a decorative butterfly.

“The mat doesn’t have a religious origin,” he said.

But he wanted his carpet to be functional, and making it fly wasn’t an option.

It could tell the Muslim faithful in which direction to pray, though.

So far, Ozenc and his partners, of Soner Ozenc Product Design Studio, have sunk $30,000 of their own money into the mat and have raised about $7,000 through Kickstarter.com.