Some work on projects that make a positive contribution to society; some are coding games, entertainment apps, and schemes to monetize friendships.

They take stock for pay and wait for the magic letters “IPO” to appear. Meanwhile, their employers fight for their loyalty with free food and party-on office cultures. 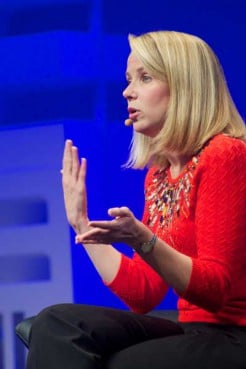 The brass ring they chase looks like Marissa Mayer, the 37-year-old former Google star who was tapped to lead Yahoo out of its extended doldrums. Like any public person, Mayer is painted in stark colors: as both immensely talented and merely lucky, an inspiring leader and a rude monster, likely to succeed and sure to fail.

Then I read a gushing piece about her “fabulous life” and was caught up short. She wears designer clothing to the office, owns seven cashmere sweaters priced at $2,700 each, carries a $4,000 purse, wears a $20,000 wristwatch, lives in the penthouse of a high-end San Francisco hotel, decorates it with $15,000 glass pieces, skis in Vail, and dabbles in high-end political fundraisers.

She's worth $300 million and is free to spend it any way she wants, of course. But I have to ask: Is this the prize? Is this what brilliant techs are chasing? Designer duds and gold baubles? Are these tech stars, in the end, no different from the “masters of the universe” (Tom Wolfe's acidic label) who turned Wall Street into a cesspool of corruption and greed? Is America's new elite just as tiresome as the old elite?

I understand the temptations. At age 22, with my first paychecks from The Wall Street Journal, I bought a sports car, then expensive suits. Even when I entered the ministry, I wanted to live well, as a reward for my hard work. Maybe this is what young people do. Maybe it takes a “heap of living” to develop values that amount to anything.

If so, no problem. Time's “ever-rolling stream” will carry them on to deeper water. Baby poop tends to challenge overweaning pride. A parent's death presents the case for mortality. “Up or out” usually means “out” for all but a few. Events like a massacre in Aurora, Colo., suggest meaning beyond toys.

The Wall Street precedent, however, suggests something less promising. Not only do the toys get more expensive, but the attitudes of entitlement and superiority get entrenched. They move into moneyed enclaves and feel little connection with their less fortunate neighbors.

In the process, society's moral deal fails. The privileged see only the prizes they think they earned. No accountability, no sharing, no tending to the less fortunate. Soon, to protect their delusions, they buy politicians and demand that they chase wealth for the greedy by turning the frightened against the vulnerable.

I hope that as Marissa Mayer and her peers grow up, have families, change diapers, get sick, fail at marriage, maybe fail at work, and discover life outside the startup pressure-cooker, they will discover a better life course than another trip to the jewelers.

News
God cares a lot about money, say faith finance groups, and maybe you should too
Follow us on Facebook!
Submit your photos to RNS