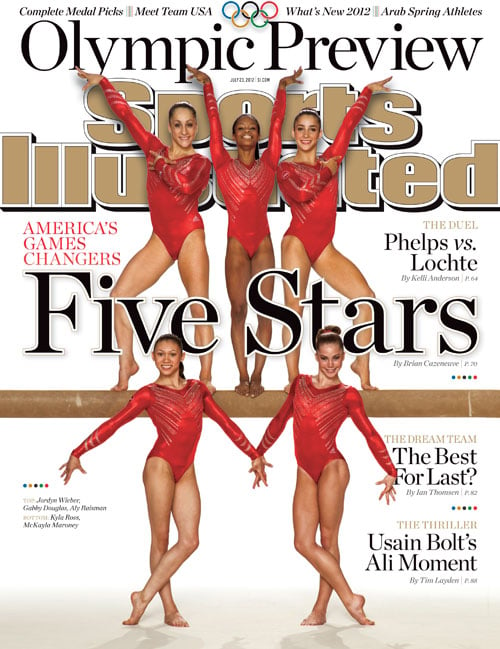 Yeah, so this post has nothing to do with religion. But it's the Olympics, people! As someone who has spent way too many hours watching gymnastics, I'm gearing up for the Olympics like it's a part-time job. Here's a viewer's guide to the U.S. women's Olympic gymnastics team.

If you watch gymnastics during the Olympics but at no other time (which you shouldn't, really; that's like going to church only at Christmas & Easter), you're going to be hearing a lot of hype about this year's U.S. team, and you're bound to be skeptical. For once you can release any skepticism. Granted, absolutely anything can happen during a gymnastics competition, so any of the predictions below are just educated guesses. But rest assured that we have more depth to this U.S. team on both the men's and women's sides than at any time since I started watching the sport in earnest and attending competitions twenty years ago.

The challenge for the team finals is that it's a "three up, three count" format. Gone are those nice cushy days when teams could drop their lowest score on any one event. Every score in the final counts toward the team's total, a system that rewards the team with the most consistency as well as the most difficulty.

This is why the women's team from China may be in some trouble. Gymnasts like He Kexin and Huang Qiushuang are fabulous when they're "on" on bars and beam, but they have had major falls in the past. I was very surprised to see Huang Qiushuang in the Olympic lineup for China, which either indicates that she's improved a great deal since last year's World Championships or that China is scraping the middle of the barrel.

My predictions: US for gold; Russia for silver; China or Romania for bronze.

Jordyn Wieber: Last year's world all-around champion, Wieber narrowly missed winning the Olympic trials, the first chink in her otherwise invulnerable armor. She is great on vault and floor, good on beam, and fair on bars. I predict that the US will use her in every event, even bars, where we are weakest. She is typically very consistent and has a good shot at all-around individual gold.

Gabrielle Douglas: Douglas has burst onto the scene this year. Her performances at the American Cup in the spring were "exhibition only" -- i.e., her scores didn't count. If they had counted, she would have won -- which she did, narrowly, at Trials. She is perfectly amazing on the bars, where the U.S. needs help most. When she hits on beam, she's great, but she is not one of those clutch performers you can count on to hit every time. I would not put her in the finals on beam for that reason. She will light it up on floor, though. America is going to fall in love.

Aly Raisman: Aly Raisman is fantastic on floor, and very strong on vault and beam. She is not a bar worker. I think she has a good chance to make the finals on floor and beam. Raisman is like a rock with her consistency and reliability. (I also notice that she is a very supportive friend to all the other gymnasts. The athlete who hugs longest and most sincerely at the end of someone else's routine is always Raisman. I have a feeling they will elect her team captain.)

Kyla Ross: She is the newbie, the baby of the team. It's her first major international competition. She fills a hole for the US on bars, where she excels, and beam, where she is elegant and usually solid. She is very good at sticking her landings.

McKayla Maroney: Maroney is on this team for about ten seconds of gymnastics, but those ten seconds will take your breath away. She is one of the best vaulters I have ever seen, with incredible height and perfect form. Last year, she wiped out the international field for the world vaulting title, beating out sentimental favorite Oksana Chusovitina, who has been competing at the Olympic level since 1992 (!). In the vault finals, it often comes down to the gymnasts' second vault, which they don't practice as much as the first one. Maroney, not one to rest on her laurels after last year's vault title, won handily last year but has upgraded the difficulty of her second vault anyway. If she stands up her two vaults she will win an individual gold medal. Moreover, her vault score can help the US team by almost a full point to earn the team gold.

If I were deciding the team lineup (which I'm not, but . . . Marta, are you listening?), here are the athletes I would put in the team finals on each event:

Happy viewing, everyone. And best wishes to all the athletes.