(RNS) Americans cheered when Aly Raisman of Needham, Mass., won a gold medal on Tuesday (July 31) in the women’s all-around gymnastics competition, but at least some American Jews likely cheered a little louder. 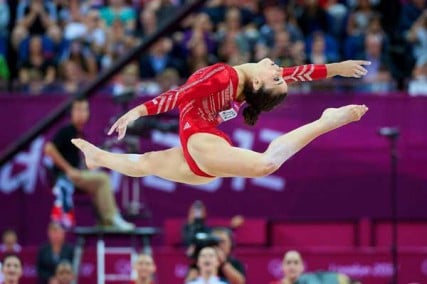 “For people who are part of a minority, to see one of your own have this international recognition gives you enormous satisfaction and pride,” said Rabbi Keith Stern of Temple Beth Avodah in Newton Centre, Mass., where Raisman has worshipped since childhood. “It lets you say, ‘Look at what we’ve managed to do.’”

Members of minority faiths in the U.S. -- Jews, Muslims, Hindus and Sikhs -- are rooting for U.S. Olympians and also saving a few extra cheers for their co-religionists, both Americans and athletes from other teams. Before they go to bed or when they wake up, they scan lists of medal winners and competition results, looking for names that might sound Jewish, Muslim, Hindu or Sikh.

In a sense, religion isn't supposed to matter in who a fan roots for, said Harold U. Ribalow, author of three books about Jewish athletes, trying to answer that question. But, he added, the evidence was overwhelming that people like to see those from their own groups do well, especially in the root-for-the-underdog world of sports.

“Because the world of sports is a great leveler, because there is a greater degree of equality between contestants in sports than in most battles in life, the sports world is, in a very true sense, one of the best of all possible worlds,” Ribalow said.

Tarlochan Singh Nahal, a Sikh from San Jose, Calif., still remembers the pride he felt when Alexi Grewal, whose father was Sikh, won a road cycling gold medal in the 1984 Olympics, just five years after he came to the United States. Grewal was not only the first Sikh American to win an Olympic medal, but the first American to take gold in a road cycling event, and provided Sikhs with a high-profile introduction to Americans who had previously never heard of Sikhism.

“I’m sure every Sikh in America was happy that he won,” said Nahal, general secretary of SikhSports.com, which organizes Sikh American sporting events. “It basically brings to light that there are Sikhs in America.”

There are no Sikhs on this year’s U.S. Olympic team, said Nahal, but he is following Canadian wrestler Arjan Singh Bhullar, as well as the Indian and Malaysian field hockey teams, which both have Sikh players.

Some Hindu Americans became instant sports fans when they heard that co-religionist and gymnast Raj Bhavsar of Houston was competing in the 2008 Olympics in Beijing.

“Many of the people don’t even watch the Olympics, but they started watching to see Raju,” said Vijay Pallod, president of Hindus of Greater Houston, an advocacy group.

Sometimes rooting for one’s religion is motivated by wanting to push back against persecution. Jeff Kornstein, who works for the American Jewish Historical Society in New York, said seeing a Jewish athlete on the winner's podium summons memories of the Holocaust or the murder of Israeli athletes at the 1972 Munich Olympics.

“There’s a little retribution, at least from my vantage point,” said Kornstein, who follows Jews on the U.S. and Israeli teams, as well as from his father's native Hungary.

Rooting for one’s co-religionists also transcends national boundaries. Janaan Hashim, a Chicago lawyer who's currently visiting Muslim-majority Jordan, said people there cheered for Nur Suryani Mohammed Taibi, a Muslim shooter from Malaysia who is also eight months pregnant, as if she were a hometown hero.

“Not because she was pregnant as much as because she was Muslim and pregnant and meeting her aspirations. She sent such a great message to the world about Muslim women and our place in sports and society at large,” said Hashim.

Sertac Sehlikoglu, who runs the Muslim Women In Sports blog, noted that Muslim women follow Muslim female athletes because sports can be a vehicle for female empowerment.

“Muslim women -- especially those living in non-Muslim contexts -- are very much interested in female Olympians coming from their home countries as much as they are interested in those coming from other Muslim countries,” said Sehlikoglu.

Rooting based on religion can also leave some Olympic fans torn, especially if a fellow believer from a foreign country is competing against an American athlete who isn't of the same faith. Almost always, interviewees said they’d want the American to win -- but not always handily.

“I’d want the American to win," Kornstein said, "but I’d want the Jewish athlete to do well."