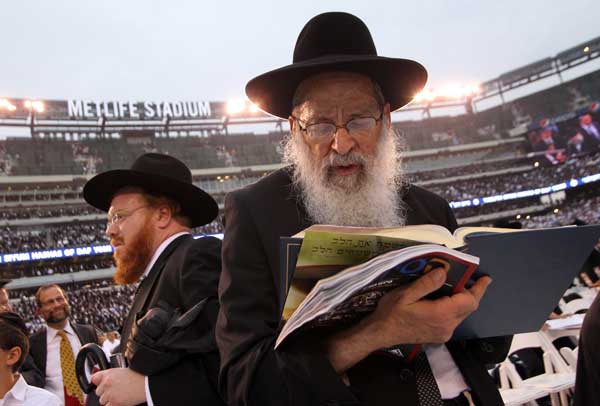 by Mark Mueller and Jason Grant / The Star-Ledger

EAST RUTHERFORD, N.J. (RNS) It has been described as a spiritual calling, a labor of love, a rich opportunity to connect with thousands of years of Jewish history and religion.

It has also been called a relentless endeavor and a marathon of study. There are no vacations, no shortcuts.

For 7 1/2 years, day in and day out, Jews in New Jersey and around the world have studied a new double-sided page of the Talmud, the biblical commentary that, written over centuries, serves as a guide to spirituality and practical life. 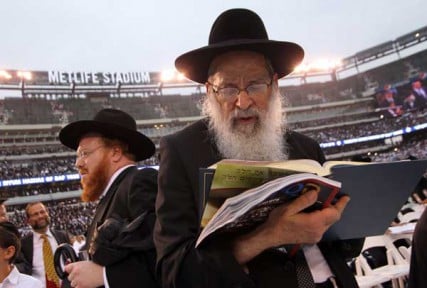 Nearly 100,000 Jews stand to pray as the Mincha begins at MetLife Stadium Wednesday August 1, 2012, during the 12th Siyum HaShas celebration. Everyone will celebrate their completion of the Talmud, a record of Jewish law. Many attending have red one page a day for the past seven and a half years.

On Wednesday night (Aug. 1), in what was billed as the largest celebration of shared Jewish learning in history, some 90,000 people crowded into MetLife Stadium to read portions of the Talmud’s 2,711th — and final — page.

The celebrants, mostly Orthodox Jews from across the U.S. and beyond, closed out the 71/2-year cycle with prayer, speeches and, when the final line was read, an explosion of jubilation that literally shook the cavernous stadium for more than 20 minutes.

Erupting into song, they swayed arm in arm, danced in circles and formed a Conga line that snaked along the field level. Others danced and swayed in the stands.

"This is what unites us together as Jews, the study of the Torah and the Talmud and its lessons," said Simon Weinstein, 47, of Lakewood, N.J., who grew emotional as he explained what daily study of the Talmud has meant to him. "I learned to always have gratitude for everyone and everything. I’m much more appreciative in my life."

It was a graduation ceremony of sorts for the page-a-day study program, known as Daf Yomi, which has grown exponentially over the decades. In addition to the 90,000 who took part at the East Rutherford stadium Wednesday night, tens of thousands of others watched via satellite broadcasts in more than 80 cities in 15 countries.

The immense crowd put an equally immense strain on nearby roads, snarling traffic for hours around the stadium and on the New Jersey Turnpike, where a 6-mile delay lingered well past the scheduled 7 p.m. start. As reports grew of motorists abandoning their vehicles and walking toward the stadium, organizers pushed back the start by 30 minutes.

Security was especially tight, a safeguard against the potential for terrorism. State Police Sgt. Brian Polite, a spokesman for the agency, said roughly 600 troopers were on scene, along with members of the FBI, the Department of Homeland Security, the Port Authority Police Department and other agencies.

"We cannot ignore what is going on around the world," Polite said. "It’s not a typical football game or a concert. It’s approximately 90,000 people celebrating a religious event."

Inside, it was a sea of black. Attendees wore their traditional black suit jackets, black yarmulkes and wide-brimmed black hats. In accordance with Orthodox Jewish tradition, men and boys were separated from women, who do not take part in organized Talmud study.

The women were seated in several upper-level sections on one side of the stadium. During prayers, large curtains on poles were drawn closed, blocking their view. The men congregated at field level and in the lower- and mid-level seats.

Shaina Weitz, 39, a West Orange resident who came to support her uncle, called the celebration an "incredible experience."

Her eyes lighting up, Weitz said she was struck by one of the speakers, who pointed out the stark difference between how Hitler spoke to a crowd of thousands at a stadium in Germany during the 1936 Summer Olympics, and how there was an equal number of Jews listening to very different speakers at MetLife on Wednesday night.

"It shows we’re still here," she said. "It’s the exact opposite of that moment."

For Rabbi Daniel Oppenheimer, 57, the event brought great pride over completing the cycle, the 12th since the Daf Yomi began in the 1920s.

"It became the major item I did any day," said Oppenheimer, who traveled to New Jersey from his home in Buenos Aires, Argentina.

As religious Jews will often say, they do not "read" a page of the Talmud so much as "study" it, taking hours, days or sometimes more than a week to examine groups of commentaries that delve into Jewish laws and interpretations on everything from holiday celebrations, candle-lighting and agriculture to business, ethics and sexual relations between spouses.

A page of the Talmud usually consists of the writings of different rabbis from different eras. Historically, study of the Talmud from start to finish was accomplished by a select few, taking decades. But Daf Yomi — initiated in 1923 by a Polish rabbi, Meir Shapiro — encourages Jews who have secular jobs to study in their own way.

Typically, those who take part devote an hour or more a day to the study, making time even amid the most challenging schedules.

Jacob Schlanger studied with a group of men at 5:30 every morning at Bnai Yeshurun synagogue, a few blocks from his home in Teaneck, N.J. Schlanger called the daily effort a challenge, but one that was well worth the effort.

"It’s the same reason people climb Mount Everest," he said. "Because it’s there."