In an age when the phrase “business ethics” can seem like an oxymoron, a group of rabbis has designed a course to use age-old Jewish teachings to help infuse some morality into economics — from the household budget to the stock market. 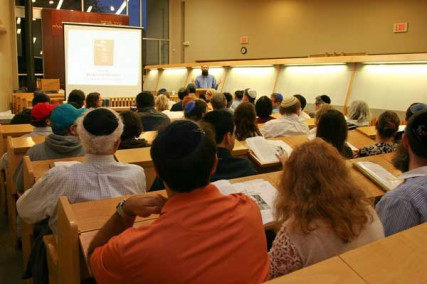 Rabbi Mendel Bluming of Chabad Shul of Potomac teaches students in his “Money Matters” class, a course on Jewish business ethics taught in 350 locations in 22 countries.

Run by the Rohr Jewish Learning Institute, which is affiliated with the Chabad-Lubavitch movement of Orthodox Jewry, “Money Matters” is offered at more than 350 locations in 22 countries this year, and is proving to be one of the most popular courses JLI has ever offered, said Rabbi Efraim Mintz, JLI’s executive director.

“When students first come to the course, they may respect the Torah (the Hebrew Bible) and the Talmud (a 2,000 year-old compendium of Jewish oral law and biblical commentary), but few see it as something relevant to the here and now,” Mintz said.

“But soon, they are mesmerized and surprised by its applicability to the business issues of the day.”

More than 22,300 people have taken “Money Matters,” which was first offered in January, and lawyers can get continuing legal education credit for it in 22 states.

The six-part course — taught by rabbis, professors and at least one federal judge — attracts mostly Jews and some non-Jews, who gather once a week to hear what ancient Jewish texts have to say about the minimum wage, collective bargaining, CEO compensation and other seemingly modern economic issues. 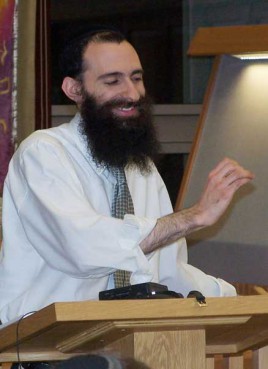 Rabbi Mendel Bluming of Chabad Shul of Potomac teaches students in his “Money Matters” class, a course on Jewish business ethics taught in 350 locations in 22 countries.

Rabbi Mendel Bluming, teaching the course earlier this year at his Chabad synagogue in suburban Washington, showed a short film about the 146 garment workers who died in the 1911 fire at New York’s Triangle Shirtwaist Factory, an event that highlighted horrific working conditions nationwide and emboldened the American labor movement.

A discussion ensued, about the potential good unions can do to protect workers, and the potential harm if they make the cost of business rise too high.

The Talmud permits labor unions to organize and bargain collectively, Bluming explained. But Jewish law also places a check on their powers, in the form of an “adam chashuv,” a “distinguished person” who can negate a union action when it’s deemed detrimental to the community.

Bluming went on to talk about strikes, and surprised some students when he told them that the Talmud forbids teachers from striking.

“That reminds us that teachers are one of life's absolute essential staples,” Bluming said. 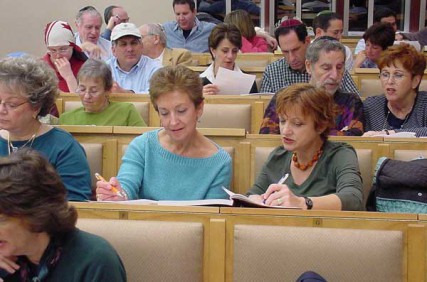 Mary Hendler, an Episcopalian and financial planner who enrolled in Bluming’s course with her husband, who is Jewish, said she knows her own industry has been tainted by those who care more for money than people.

The course reminds her that every person in a business dealing must be treated fairly, because all people are created in God’s image, she said.

“As a religious person I’d love to believe people were getting that education in their temples and churches and mosques,” Hendler said. “I wish we didn’t have to teach ethics.”

On the campus of the University of Chicago, Rabbi Yossi Brackman teaches “Money Matters” to a group of students at the Booth School of Business, and makes the point — among many others — that Judaism has no problem with affluence, or the fact that not everyone is going to have the same amount of money.

“Wealth in itself in Judaism should not be seen as a goal in itself – it should be a means to something greater,” Brackman said. “That’s very clear from rabbinic tradition. It’s not how much money you have, it’s what you do with your money.”

But he said it “roiled” some of his students when he taught that Judaism does not always demand that an employer pay a living wage.

“The employer, who has already given the employee a job, is not necessarily required to pull him out of poverty; the community is first and foremost responsible,” Brackman said, referring to both Torah and Talmudic teachings.

One thing the Torah is clear on: Charity is not optional, he said, and “there’s definitely a discussion in the Talmud that the community should take care of the poor.”

In the U.S., the course costs $99. In keeping with Jewish ethics, Mintz said, that fee is waived for those who can’t afford it.

“How could we teach a course on business ethics if we didn’t practice it as well?” he said.