(RNS) Though she is at the center of one of the biggest crises in the Catholic Church today, Sister Pat Farrell is loath to talk about herself, and certainly not in any way that would make her a focus of the looming showdown between the Vatican and American nuns.

Franciscan Sister Pat Farrell, president of the Leadership Conference of Women Religious. Photographed before the start of the LCWR national board meeting in Washington May 29, 2012.

To be sure, Farrell has spoken publicly and with quiet clarity about why the organization she heads, the Leadership Conference of Women Religious, rejects Rome’s plans to take control of the umbrella group that represents most of the 57,000 nuns in the U.S.

In announcing its proposed takeover last April, the Vatican accused the nuns of embracing a “radical feminism” that questions church teachings and focuses too much on social justice causes. Farrell says the American sisters are simply doing what the gospel requires, often speaking on behalf of so many in the church who have no one else to advocate for them.

The high-profile confrontation will reach another crucial pass next week (Aug. 7-10) when LCWR members gather in St. Louis to develop a formal response to the Vatican’s plans. Options run the gamut from complying with all of Rome’s directives (unlikely) to decertifying the group and re-establishing it outside of the pope’s control (a possibility). 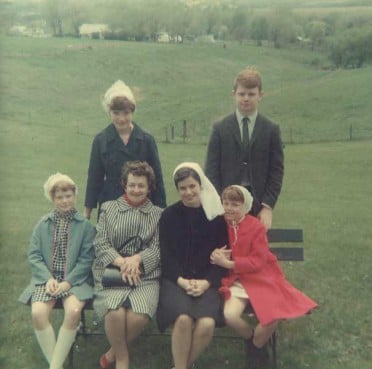 Sister Pat Farrell (seated center right) as a senior novice during a family visit in 1967.

But it is Farrell’s own life – a vocation that has taken her from the Iowa heartland to ministry in Pinochet’s Chile and war-ravaged El Salvador and back again to Iowa – that may be the best way to understand the root of Rome’s clash with the nuns, and why it may not be going away anytime soon, much as Farrell wishes it would.

“I’ve had a dramatic life, I really have. But the drama of it is not what’s important,” says Farrell, a soft-spoken, 65-year-old Franciscan who eventually, if hesitatingly, agreed to discuss her more than two decades in Latin America. “The best of what we do is not about high drama.”

Indeed, behind the drama is a story of service to the poor, advocacy for the marginalized, and a radical spirituality that has profoundly shaped Farrell and many nuns like her – as well as shaped the identity of the LCWR. Viewed in this context, the standoff is not a political struggle or power play as much as a contrast of complementary roles and experiences in the church. 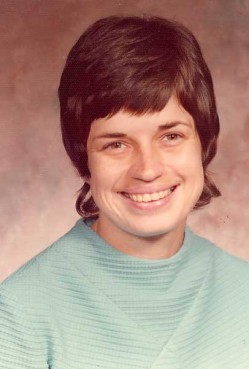 While church officials often want to protect and emphasize doctrinal orthodoxies, sisters like Farrell often operate from a pastoral experience of faith in action that emphasizes a prophetic voice on behalf of the people they live with.

Farrell’s familiarity with hardship began early on. She was born on an Iowa farm, the second of six children in a strong Catholic family. Her father was in failing health, and when she was still a toddler they moved to Waterloo so he could work at the John Deere tractor factory. He died at 48, leaving Pat’s mother, Rosella, to raise her brood by working hourly wage jobs as a store clerk and in a dress shop.

Following a “desire to know God,” Farrell left home at 14 to attend a boarding school in Dubuque run by the Sisters of St. Francis, the religious order that she would eventually join. It was a simple decision in retrospect.

Her initial calling was followed by a lengthy and not unusual process of discernment that featured “lots of questions, lots of growing up” before she professed final vows at 29. Farrell had studied English and theology in college, and had worked at Iowa parishes and Catholic schools in her 20s. Now she was ready for a bigger challenge.

“I always had a restlessness,” she said. She didn’t know where she wanted to go, only that “I knew I needed to be with people who are poor.” The order obliged, and in the mid-1970s sent her to work in a downtrodden area in San Antonio.

When she crossed the Texas border to Mexico to improve her Spanish, Farrell had the epiphany that would set the course of her life. “When I saw the kind of church there, I fell in love with it.”

The culture and music and vitality of Mexican Catholicism, and in particular the warmth of Christian “base communities” – grass-roots groups of the faithful, usually peasants, that began flourishing in the 1960s in Latin America – enchanted the young nun.

She returned, telling her community that one day she wanted to go back to Latin America. Five years later, in January 1980, the order sent her to Chile.

“It was a situation that just made me proud to be a Catholic.”

The country at that time was entering its darkest days under dictator Augusto Pinochet, whose regime would kill, torture or exile thousands of Chileans over the next decade.

Farrell was sent to work in the poor northern city of Arica, next to Peru and the Atacama Desert, known as the driest desert in the world. “It was a pretty isolated, abandoned area,” she recalled. But she loved it. 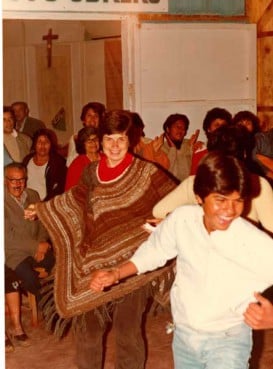 Sister Pat Farrell in the parish of Cristo Obrero in Arica, Chile about 1984.

She worked there for most of the next six years, serving the parish and helping to provide basic services and organizing people to advocate for themselves. Her last year in Chile was spent in the capital, Santiago, where she became active in the nonviolent resistance movement, learning dialogue strategies that she uses to this day in discussions with Rome.

The Catholic Church in Chile those days, from the hierarchy to the laity, was a leading voice for human rights, standing “with the people on the margins,” she recalled. It made an indelible impression.

“It was far and away the most wonderful experience of church I’ve ever had,” Farrell said. “It was a situation that just made me proud to be a Catholic.”

But Farrell was restless again, and knew there was a great need in El Salvador – and great risk. If Chile was a repressive state in the 1980s, El Salvador was in open civil war, and Catholic priests and religious were on the front lines.

Maryknoll Sister Ita Ford was one of four Catholic missionary women who were tortured, raped and murdered by a Salvadoran military death squad in 1980. That happened just months after Ford had arrived in El Salvador from Chile. One of her last tasks before leaving Santiago was helping Farrell learn the ropes. 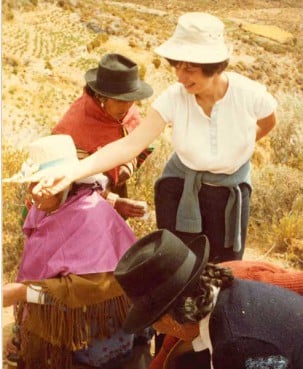 Sister Pat Farrell with Aymara Indians in the north of Chile about 1982.

When word of Ford’s murder reached Farrell, she said she actually felt “strengthened.”

“I thought if she could be faithful to the end, giving her life, then maybe the rest of us, who are not too different from her, can be faithful to what is being asked of us,” Farrell recalled.

“We had some scary moments with the military …”

In 1986, Farrell landed in El Salvador and went to work in a church-run refugee camp that was the target of military raids. Then she went to Suchitoto, a war-zone city left virtually empty by the violence. The church was trying to resettle returning residents and Farrell worked with military leaders who controlled the city and guerrillas who controlled the countryside. And she had to reconcile and unite Salvadorans who were loyal to the many factions within the rebel movement.

“What she really helped to do was to get people to move beyond their own factions,” Besch said.

From the distance of years, it is hard to recall, or to overestimate, the peril that Farrell and others faced in those days. In 1989, six Jesuits, their housekeeper and her daughter were brutally executed by a military death squad at their residence in a Catholic university in the capital, San Salvador. 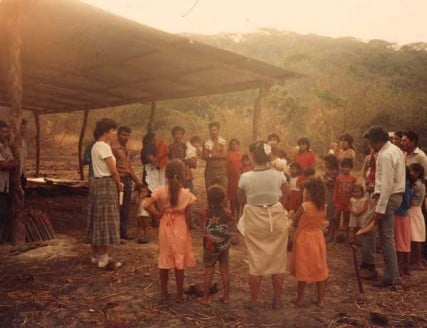 Still, Farrell is reluctant to play up that aspect of her life there. “Oh yeah, we had some scary moments with the military,” she said flatly, and without elaborating. “Everybody knew us, that’s for sure.”

Through it all, Farrell was sustained by the same deep Franciscan spirituality that remains at the core of her identity and vocation – an element that is often lost in the prevailing political narratives about the LCWR’s struggle with the hierarchy.

“This is coming from her spirituality,” said the Rev. Jim Barnett, a Dominican priest in St. Louis who worked with Farrell in El Salvador during the war. “This isn’t political. She’s a careful person. But she’s also very brave.”

“Spirituality and the work for justice are entirely inseparable …”

Properly speaking, “nuns” are cloistered women devoted to prayer and isolated work while “sisters” – like Farrell and most women who live in community under vows of chastity, poverty and obedience – work in the world as part of their ministry.

Yet sisters like Farrell are not just human rights advocates or hospital executives or social workers with a sacred gloss – a criticism that the Vatican investigators have directed at members of the LCWR, who they say are often insufficiently (or incorrectly) spiritual.

While in El Salvador, Farrell used a tin-roofed shack in a nearby field as a hermitage, spending five days a month alone for prayer, contemplation, and writing. It is a practice she still tries to maintain to this day, though few in the LCWR – or in Rome, it appears  – know about it. “It’s a little more difficult these days because she is tied to a Blackberry,” Besch said with a laugh.

“For me, that spirituality and the work for justice are entirely inseparable,” Farrell said, her voice rising with the passion of her convictions. “If either one is authentic, it leads to the other.”

Farrell returned to the U.S. in 2005, and a few years later was elected head of the LCWR. It was not a position she sought, but she accepted it. At every turn, when asked about how she faces difficulties and challenges, Farrell recalls her experiences in Latin America – the privilege, she says, of serving there and witnessing great grace amid great tragedy.

“That experience,” she said, “has certainly developed in me a deep knowing that pain and oppression do not have the last word.”

Signs of the Times
US Catholic bishops’ response to McCarrick report is sad but predictable
News
Vatican cardinal says ouster deprived him of possible papacy
News
A blue surprise? As Arizona trends toward Biden, Latino voters stand out
Signs of the Times
Worse than bungling, McCarrick report shows Vatican failed to take abuse seriously
Opinion
Joe Biden will remove the ‘bully’ from the bully pulpit