MIDDLEFIELD, Ohio (RNS) The Amish are one of the fastest-growing religious groups in North America, according to a new census by researchers at Ohio State University.

The study, released July 27 at the annual meeting of the Rural Sociological Society, suggests a new community sprouting every three and a half weeks. 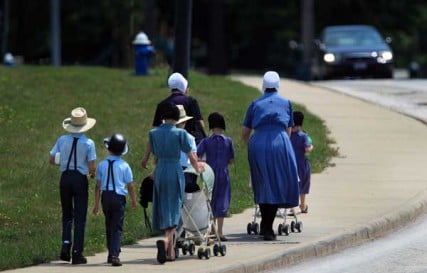 The growth may not be visible outside Amish country, but the rural settlements definitely see the boom.

“This place has grown,” said Daniel Miller, 52, who has spent his life on an Amish settlement here. “It's because all of the kids.”

Many Amish families have multiple children, Miller said, adding that those children often stay in the community and eventually sprout families of their own.

There are currently 99 church districts, or communities, in Middlefield, which is east of Cleveland in central Northeast Ohio. Miller said he remembers when there were less than 20.

The Amish double their population about every 22 years, said Joseph Donnermeyer, the Ohio State professor who led the census project as part of the recent 2010 U.S. Religion Census.

The skyward growth has made Ohio home to more than 60,000 Amish residents — the most in any state. Pennsylvania ranks second with about 59,000 Amish people. Indiana ranks third with about 45,000.

Simple economics also has been a factor in the rising population, Donnermeyer said.

“They are often purchasing land at good market prices,” he said. “They are buying land that no one else wanted to buy. Generally speaking, the Amish are a good economic value for the rural communities. They have business startups and they are more likely to buy local.”

Additionally, Amish residents are not likely to draw on government money, Donnermeyer said, adding that Amish people have very low unemployment and rarely go on welfare.

He said Amish residents also pay the same taxes as other citizens. “The idea that the Amish don't pay taxes is the biggest mythology about the Amish,” Donnermeyer said.

About half of the Amish people in Ohio live in the greater Holmes County settlement in the central part of the state. Holmes County itself holds the highest concentration of Amish residents in any county in the United States.

Many Ohio counties have just what the Amish population is looking for, Donnermeyer said.

“You can't be too rural,” he said. “You have to be close enough to a town with the basic necessities, like a bank, hospital, etc. I think Ohio is the perfect mix.”

As the population grows, the Amish community and its neighbors begin to merge. In Middlefield, horse-drawn buggies are parked outside the local Wal-Mart.

“I'm not a fan of Wal-Mart, but my wife is,” said Amish farmer Dan Yoder, 59, as he walked through the Wal-Mart parking lot. “We get the stuff you can't make at home.

“Things have changed a lot. This lot used to be my uncle's farm.”

(Brandon Blackwell writes for The Plain Dealer in Cleveland).