But many American Sikhs say they do know this: Their community has been targeted by a growing number of hate crimes since the 9/11 terrorist attacks. The New York-based Sikh Coalition reports more than 700 such incidents since 2001. The question is: Why? 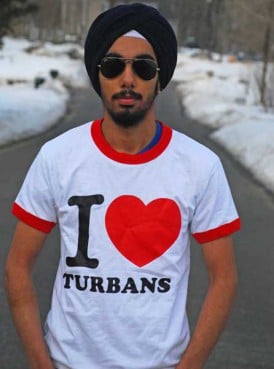 Jagmeet Sethi started a Connecticut-based apparel company called TurbanInc to produce t-shirts to express his pride in being a Sikh. “We wanted to combine one of our most routine methods of expression with confidence, self-love and pride in being Sikh.”

“The turban is the main issue here,” said Pashaura Singh, a professor of Sikh and Punjabi studies at the University of California-Riverside. “People confuse Sikhs with Osama bin Laden.”

Following 9/11, bin Laden and his al-Qaida associates were often shown in media reports wearing white turbans. Combine that with a lack of basic knowledge about the estimated 500,000 Sikhs living in the U.S. and you get tragic — and sometimes violent — cases of mistaken identity.

“Numerous reports have documented how those practicing the Sikh religion are often targeted for hate violence because of their religiously mandated turbans,” wrote 92 House members to Attorney General Eric Holder in April. The House members called on Holder to begin collecting data on hate crimes committed against Sikh Americans.

Rupinder Singh, a California health care administrator who writes the blog American Turban, has heard taunts of “terrorist” and “Osama” as he shops at the mall. “When I walk into a restaurant or an airplane, all eyes are on me,” he said.

But Singh said he would never consider taking off his turban. “It is such a core part of our identity. I could never imagine separating from it.”

Founded in India in 1469, Sikhism is often confused with Hinduism or Islam, but is part of neither. The religion teaches that there is one God, but many paths to the divine, and abjures proselytism.

Each of the faith's 10 founding gurus wore turbans, called dastars, but it was the last, Guru Gobind Singh, who instructed all male members of the faith to wear them. (The requirement is optional for women.) The reasons ranged from political to theological.

Sikh gurus rebelled against India's strict caste system, teaching instead that people are essentially equal in God’s eyes. Turbans, typically worn by the upper class, should be worn by the lower classes as well, the gurus taught, to symbolize that equality.

But it is more than a political symbol. Like Orthodox Jews who wear yarmulkes or Catholic nuns who don habits, Sikhs believe the turban is a visible declaration of humility before God and commitment to their faith.

Out of respect for God’s creation, Sikhs do not cut their hair, instead knotting it each morning and wrapping it in five meters of cloth, which protects the hair as well as the mind, said Pashaura Singh.

The turbans are worn in a variety of styles and colors, with some carrying symbolic significance. White turbans represent purity; navy blue represents the sky and ocean and is often worn by temple officials. Saffron is the color of sacrifice, and black the shade of political protest, Pashaura Singh explained.

In an increasingly pluralistic America, the turban has also become an emblem of the country’s commitment to religious freedom, a value strongly shared by Sikhs, said interfaith activist Ralph Singh.

“The irony is that in the process of proudly displaying that emblem, we have become a clear target for those who feel that people who are different are threats,” he said.

Ralph Singh has been among the targets. Gobind Sadan USA, his spiritual community near Syracuse, N.Y., was firebombed on Nov. 18, 2001 in perhaps the first post-9/11 case of mistaken Sikh identity. Singh said he later received a letter from one of the young men convicted of arson.

“He said that if he had known who we are, he never would have done it,” Singh said.

News
An animated film to chronicle life of ‘Sikh Captain America’ in aftermath of 9/11
Follow us on Facebook!
Submit your photos to RNS