(RNS) News that Comedy Central star Stephen Colbert and New York Cardinal Timothy Dolan would appear together on a panel on faith and humor next month was greeted with widespread anticipation: Both men are devout Catholics and pretty darned funny. 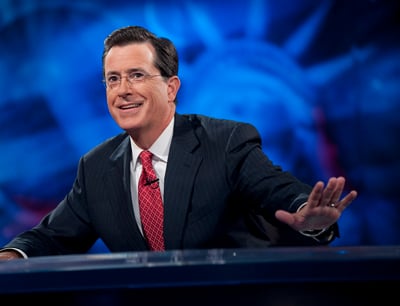 Comedy Central's Stephen Colbert has used his "Colbert Report" to gently make fun of religion and religious institutions, even as he remains a man of deep and devout Catholic faith.

But now this tale has a surprising punch line that will surely make a lot of people unhappy: Organizers of the Catholic comedy slam, set for Sept. 14 at Jesuit-run Fordham University in New York, have announced a total media blackout of the event.

“After extended conversations with the program participants, the university will be closing the event to the media,” the university’s communications office wrote Thursday (Aug. 9) in an email to reporters. The event is titled “The Cardinal and Colbert: Humor, Joy, and the Spiritual Life.”

“The evening has evolved from a public event to a more intimate conversation in front of members of the Fordham community,” the statement said. “We will not be videotaping the event for distribution, nor streaming it on the web or elsewhere.”

Cardinal Timothy Dolan of New York, president of the U.S. Conference of Catholic Bishops, has said talks with the White House over a proposed contraception mandate are "going nowhere."

That’s an abrupt change from initial plans to broadcast the event as widely as possible, maybe even on cable television. It may also rob the Catholic Church of a valuable opportunity to show the faith in a positive light and to an audience – Colbert’s, mainly – that might otherwise tune out churchmen like Dolan.

As of now it appears that the audience for the event will be limited to several hundred Fordham students. But given the ubiquity of hand-held digital devices – and the demand for at least snippets of the cardinal and the comedian interacting – it is likely that at least some of the program will make it onto YouTube or Twitter.

Dolan’s spokesman referred all inquiries about the switch to Fordham, and officials there said they could not elaborate. A spokeswoman for Colbert, who portrays a right-wing blowhard on his popular cable show, “The Colbert Report,” did not respond to requests for comment.

Related Posts
By Emily McFarlan Miller
Digital pilgrimages allow the faithful to travel the world from their couches
By Bill Baker
A conversation with Father James Martin: 'Why did God let this happen?'
By Jeffrey Salkin
Warning: Your piety might be dangerous to your health
By Adelle M. Banks
Often-reticent Justice Clarence Thomas speaks about his faith in new documentary
By Thomas Reese
Students lobby Congress on DACA and global warming