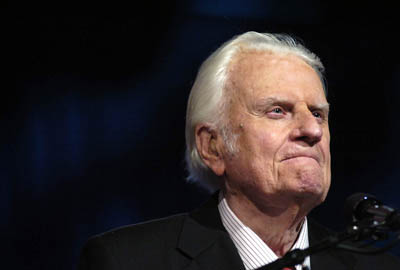 UPDATE: Evanglist Billy Graham was released from Mission Hospital in Asheville, N.C., on Tuesday (Aug. 14) after successful treatment for bronchitis. From the press release:

“Mr. Graham had a quick recovery and responded very well to his treatment,” said Daniel Fertel, MD, Mission Hospital pulmonologist. “Catching these types of pulmonary infections early is crucial for a fast recovery, as was the case for Mr. Graham. Despite this illness he remains remarkably healthy for a 93-year-old man.”

“I am also grateful for the prayers and letters I received from people across the country and around the world during my short stay," Graham said. "Such an outpouring of love and support is always a blessing but was especially appreciated during my hospitalization.”

ASHEVILLE, N.C. (RNS) Evangelist Billy Graham, 93, was admitted to a North Carolina hospital after he developed a fever Saturday (Aug. 11) and is now being treated for bronchitis, said his longtime spokesman, A. Larry Ross.

“Mr. Graham continues to do well and the infection is responding well to treatment,” said Dr. David Pucci, the pulmonologist who is treating Graham at Mission Hospital in Asheville, N.C., on Monday. Graham is in stable condition.

Graham spent Sunday watching the Olympics and the broadcast of the worship services at First Baptist Spartanburg, where the guest preacher this week was his grandson, third-generation evangelist William Graham IV, Ross said.

Graham was previously hospitalized at Mission Hospital for successful treatment of pneumonia last November. He resumed his routine program of physical therapy and normal activity at his home in Montreat, N.C., shortly after his release.

Ross said Sunday that Graham has remained in good overall health the past year, though he continues to remain at home because of age-related conditions. Graham remains actively involved in ministry and writing projects, including near completion of a manuscript for a new book summarizing his gospel message over the past seven decades of public ministry.

It's expected Graham will be in the hospital for "a few days," Ross said. The hospital reported Graham is looking forward to returning home to his family.

September 3, 2020
Related Posts
By Jeffrey Salkin
COVID has led us all into sin
By Associated Press
Apt Bible passage at Catholic Mass coincides with earthquake
By Yonat Shimron
Billy Graham statue to replace that of white supremacist in US Capitol
By Alejandra Molina
‘Your fight is my fight’: Latino clergy and faith leaders rally behind Black Lives Matter
By Timothy Keller
How Ravi Zacharias changed the way evangelism is done