(RNS) The host city for the Democratic National Convention is not a particularly political place. Charlotte, N.C., is known for three things: banking, NASCAR and religion.

And when it comes to religion, Billy Graham’s spirit looms large. 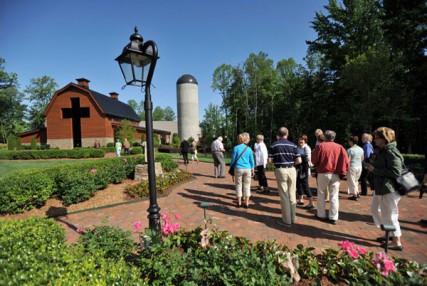 Guests visit the barn at the Billy Graham Library in Charlotte, N.C.

America’s most famous evangelist of the 20th century was born on a dairy farm just outside of town and was raised in Charlotte, home of his ministry.

For the Democrats – labeled disparagingly by some Republicans as the party of secular humanism – Charlotte is not a bad place to try and raise their religious profile.

“Religion still drives the town, though not as much as it used to,” said Ken Garfield, former religion editor of The Charlotte Observer and now communications director for the city's Myers Park United Methodist Church.

“There are some 600 to 700 houses of worship in Charlotte, and the Gallup Polls that ask ‘have you attended a house of worship in the past week’ always show Charlotte four to five points higher than the national average,” he said.

Close to the South Carolina border, Charlotte is home to the Billy Graham Library (which is also a museum dedicated to his life and message), the Billy Graham Evangelistic Association, and Billy Graham Parkway, which will funnel delegates from the airport toward the Time Warner arena downtown. 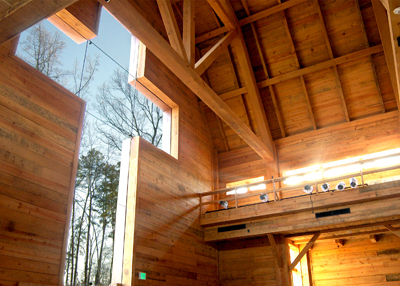 A giant cross-shaped window is the centerpiece of the Billy Graham Library
in Charlotte, N.C. The library and museum trace the life of
America’s most famous evangelist.

When conventioneers need a break from the politics, the Graham library makes for an inspiring excursion for those who share his faith. But it’s also an educational experience for anyone who wants to know more about Graham’s influence on several U.S. presidents, the civil rights movement and evangelism worldwide.

“The library is a kind of must-see if you’re interested in understanding the most famous North Carolinian of all time,” said Garfield.

The preacher, 93 and ailing, has retired to his retreat in North Carolina’s Blue Ridge Mountains.

Graham is a Southern Baptist, and part of the largest denomination in greater Charlotte, according to Citi-Data.com, followed by Catholics, Methodists and Presbyterians, the predominant group that settled the city in the 18th century.

Graham’s presence may be felt keenest in Charlotte, but other religious Charlotteans have shaped the religious character of the city – with good works and missions, but often with art.

Home to Bank of America and the east coast operations of Wells Fargo, the city’s banking sector has helped make Charlotte wealthier than most U.S. cities, which has meant a little extra money for public and ecclesiastical artwork – many of them a short walk or drive from the Time Warner Cable Arena.

Start with the Ben Long fresco at First Presbyterian Church, in the heart of the city. Long, a North Carolina artist with an international reputation, created “The Good Samaritan” in 2001 for the church, itself a classic example of traditional American Presbyterian church architecture.

“The ones on the north side of the building represent our theology of Creation to Resurrection,” said church administrator Ed Holland.  “The south side depicts our history from Africa to Charlotte.”

Charlotte is also home to more than 10,000 Jews, and its major synagogues and Jewish Community Center are clumped together on one piece of land, called Shalom Park, south of downtown. Its Butterfly Garden Holocaust Memorial features a sculpture that includes more than 2,800 ceramic butterflies to honor the 1.5 million children who perished in the Holocaust.

Catholic Charlotte will be particularly accessible during the convention. St. Peter's Catholic Church is blocks from the arena, and the Cathedral of St. Patrick, less than a mile away, will offer a “perpetual adoration” of the Blessed Sacrament for the duration of the convention. Every hour of the day and night, Catholics will sit in the presence of a consecrated Communion host, which they believe is the body of Christ.

Billed as a “Vigil for Liberty,” church leaders will ask for prayers for the nation’s strength and leaders, and “the right to live, unthreatened by government mandate, from natural conception to natural death” – a reference to, among other policies, the Obama administration’s new rule requiring most employers to include contraception coverage in their health plans.

“People ask, ‘What are you going to do with all those Democrats in town?’” said David Hains, communications director for the Diocese of Charlotte. “Well, we’re going to pray.”

Charlotte’s reputation as a well-churched city of the New South has a giant blot, though.

In the 1970s and 1980s, the city was home to Jim and Tammy Faye Bakker’s televangelism program on the “Praise the Lord” satellite network, which at its height broadcast to more than 13 million viewers and came crashing down after Jim Bakker’s sex scandal and felony convictions.