(RNS) God was out and now God is in. And Jerusalem wasn’t the capital of Israel and now it is.

The accusations Wednesday morning (Sept. 5) that God had been “purged” from the Democrats’ national platform seemed too much for the party to bear. That afternoon, its national convention restored the divine to the document, as well as a statement affirming Jerusalem as the capital of Israel.

It was a crisis the party didn’t seem to see coming, and provided one of the few unscripted scenes this convention season, a chaotic day that highlighted the debate among the Democrats about religion and politics. 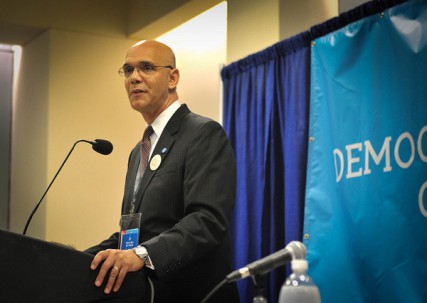 President Obama himself on Wednesday pushed for the “God” and “Jerusalem” references, according to an anonymous Democratic official. One platform amendment added a sentence about Americans’ “God-given” potential and the other affirmed Jerusalem’s “capital” status.

It was a charged moment on the convention floor in Charlotte, N.C., as the amendments were offered together to the delegates. Former Ohio Gov. Ted Strickland, co-chairman of the platform committee, introduced them, and let the convention know that he is an ordained United Methodist minister.

On the first vote the “ayes” and “nos” seemed equally loud. Same for the second try. After the third try, the flustered convention chairman, Los Angeles Mayor Antonio Villaraigosa, announced that the “ayes” had it by the necessary two-thirds vote, and was met by a wave of booing, with delegates shaking their heads that the threshold for approval had not been met.

The party had to add “God” back, said John Green, a University of Akron professor who specializes in religion and politics. “I was a little surprised that the reference to God had been removed, but I was not at all surprised by the party’s reaction when this became an issue.”

Democrats, he said, have struggled in the past with the perception that they are hostile to religion and worked hard in recent years to reach out to religious groups.

Green says Democrats have a problem with “God talk.” Their coalition, which includes a substantial number of nonreligious people but also a diversity of religious people with varying approaches to God, doesn’t have a clear and simple conception of the divine.

So rather than risk offense, the platform writers may have decided to leave God out, Green said.

That led to GOP vice presidential nominee Paul Ryan’s televised denunciations Wednesday morning, and a revival of the idea that Democrats do not respect believers or understand the divine’s central place in U.S. history.

“It’s not in keeping with our founding documents, our founding vision, but I guess you would have to ask the Obama administration why they purged all this language from their platform,” Ryan said.

Ryan also called the platform’s failure this election cycle to affirm Jerusalem as the capital of Israel “tragic.”

Many Republican Jews and conservative Christians agreed, calling the omission a sign of the Democrats’ relatively weak support for Israel.

Not only are Democrats diverse on divinity, they also include a multitude of opinions on the Jewish state, and the shape that a negotiated settlement of its dispute with the Palestinians may take.

Much of the growing Muslim constituency within the party – there are four times as many Muslim delegates this year as in 2004 – wanted to keep the platform the way it was.

Noor Ul-Hasan, a Muslim delegate from Salt Lake City, explained why she opposed the Jerusalem amendment. “We have two Muslims in our delegation and we have two Jews as well,” she told the website TPM. “We work together. But I think if they told me that they were going to make a Muslim city be the capital, I think we’d be dividing our Democrats.”

Also opposed to the Jerusalem amendment were non-Muslims who said the status of Jerusalem should be decided during the peace process.

Orthodox Jewish leaders welcomed the change. “Jerusalem is the capital of Israel, and it must remain undivided so that — as has been the case only under Israeli sovereignty — people of all faiths have access to all holy sites,” read a statement from the Orthodox Union.

The Arab American Institute accused the party of forcing the Jerusalem amendment into the platform and called it a “knee-jerk reaction to baseless accusations from the far-right that the Democratic Party has ‘thrown Israel under the bus.’”

Also unhappy: atheists. Hemant Mehta, chairman of Foundation Beyond Belief, wrote in his “Friendly Atheist” blog that the Democrats showed some “backbone” by initially leaving God out of the platform. “Belief in God is a personal choice and there’s no reason to include reference to one faith or one system of belief in a platform designed to represent a large, far-from-monolithic party.”

“You knew it wasn’t going to last,” he added.

But if the Democrats have managed to press through the God/Jerusalem debacle in Charlotte, the issues remain for them during the campaign to come, said Willie Jennings, a theology professor at Duke University's divinity school.

“The Republicans are going to need to try to find as many as ways as possible to fire their base up,” Jennings said. “God language, religion, is one way.”