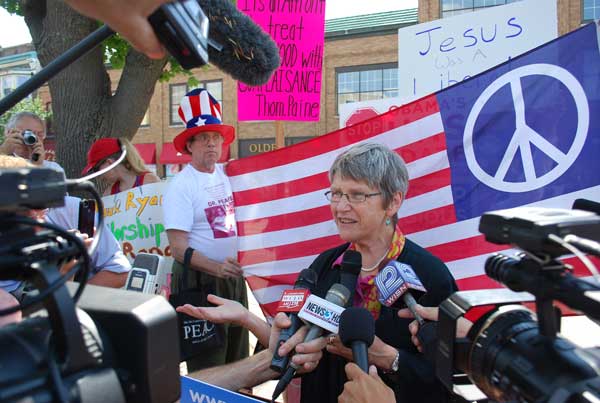 (RNS) Sister Simone Campbell, who led the “Nuns on the Bus” tour for social justice this summer, called the GOP budget plan “immoral” in a spirited speech at the Democratic National Convention on Wednesday (Sept. 5).

Sr. Simone Campbell talks to the press right after the nuns meeting with a representative of Rep. Paul Ryan in Janesville, WI.

“Paul Ryan claims this budget reflects the principles of our shared faith,” Campbell said, as she took direct aim at Mitt Romney’s running mate, who has often cited his Catholic faith as the underpinning of his fiscal policies. “But the United States Conference of Catholic Bishops stated that the Ryan budget failed a basic moral test, because it would harm families living in poverty,” she said.

The Romney campaign did not respond to requests for a response on Thursday.

Ryan has argued that his budget plan is informed by Catholic social teaching, and that reducing the federal deficit through budget cuts would help the poor and all Americans by allowing the economy to grow.

The bishops, with some notable exceptions, have countered that Ryan's budget in fact violates Catholic social teaching by emphasizing cuts in programs for the needy while reducing taxes for the wealthy. Ryan's plan has also been criticized as likely to expand rather than reduce the national debt.

By framing her critique in the context of her Christian faith, Campbell was using the kind of religious language that has been a hallmark of the GOP’s campaign to rally believers behind Romney and Ryan.

But she also sought to identify the sisters and the Democratic agenda with Catholic tradition at a time when Catholic voters – who comprise close to one-quarter of the electorate – are considered key to the November election.

Just as important, Campbell neatly folded her remarks in with statements from the Catholic hierarchy, which has had more than its share of disagreements with President Obama and the Democratic Party over issues like gay marriage and abortion.

“We agree with our bishops, and that's why we went on the road: to stand with struggling families and to lift up our Catholic sisters who serve them," said Campbell, who heads a Washington-based Catholic social justice lobby called Network. "Their work to alleviate suffering would be seriously harmed by the Romney-Ryan budget.”

In her seven-minute speech Campbell did not address hot-button issues like abortion directly, but she earned the loudest ovation when she defended Obama’s health care reform law as a cause she considers “part of my pro-life stance and the right thing to do.”

Like many other speakers at the convention in Charlotte, N.C., Campbell framed the election as a choice between a philosophy of individualism championed by Republicans and a more communitarian approach to society building emphasized by Democrats.

She also underscored the plight of poor and working class Americans in the recession, and pointed to Democratic policies as both the most effective answer, and the most moral one.

“During our journey, I rediscovered a few truths,” Campbell said. “First, Mitt Romney and Paul Ryan are correct when they say that each individual should be responsible. But their budget goes astray in not acknowledging that we are responsible not only for ourselves and our immediate families. Rather, our faith strongly affirms that we are all responsible for one another.”

“I am my sister's keeper. I am my brother's keeper,” she said to applause.

The Washington Post’s Chris Cillizza listed Campbell as the second biggest “winner” of Wednesday night’s events, after former President Bill Clinton’s tour de force address, noting that she “got a raucously positive reception from the crowd and turned into one of the more unlikely stars of the night.”

Campbell has become well-known both for her advocacy of liberal issues but also as one of the targets of a Vatican crackdown on American nuns who Rome believes are too eager to disagree with church teachings on sexuality and gender while overemphasizing church teachings on social justice.

In June, Campbell did a star turn on “The Colbert Report” to rebut those charges, and the Democrats clearly wanted to take advantage of her appeal.

But the nun also told convention organizers that she would only speak if she could cite her opposition to abortion as well as her other views, according to CNN. She also rejected efforts to include language that sounded too “political” and told party operatives that she would rather give her prime time speaking slot to someone else. Her concerns were heeded.

Here is the text of Campbell's speech as delivered:

Let me explain why I'm here tonight. In June, I joined other Catholic sisters on a 2,700-mile bus journey through nine states to tell Americans about the budget that Congressman Paul Ryan wrote and Governor Romney endorsed.

Paul Ryan claims this budget reflects the principles of our shared faith. But the United States Conference of Catholic Bishops stated that the Ryan budget failed a basic moral test, because it would harm families living in poverty.

We agree with our bishops, and that's why we went on the road: to stand with struggling families and to lift up our Catholic sisters who serve them. Their work to alleviate suffering would be seriously harmed by the Romney-Ryan budget, and that is wrong.

During our journey, I rediscovered a few truths. First, Mitt Romney and Paul Ryan are correct when they say that each individual should be responsible. But their budget goes astray in not acknowledging that we are responsible not only for ourselves and our immediate families. Rather, our faith strongly affirms that we are all responsible for one another.

I am my sister's keeper. I am my brother's keeper. While we were in Toledo, I met 10-year-old twins Matt and Mark, who had gotten into trouble at school for fighting. Sister Virginia and the staff at the Padua Center took them in when they were suspended and discovered on a home visit that these 10-year-olds were trying to care for their bedridden mother who has MS and diabetes.

They were her only caregivers. The sisters got her medical help and are giving the boys some stability. Now the boys are free to claim much of the childhood that they were losing. Clearly, we all share responsibility for the Matts and Marks in our nation.

In Milwaukee, I met Billy and his wife and two boys at St. Benedict's dining room. Billy's work hours were cut back in the recession and Billy is taking responsibility for himself and his family. But right now without food stamps, he and his wife could not put food on their family table.

We share responsibility for creating an economy where parents with jobs earn enough to care for their families. In order to cut taxes for the very wealthy, the Romney-Ryan budget would make it even tougher on hard-working Americans like Billy to feed their families. Paul Ryan says this budget is in keeping with the moral values of our shared faith. I disagree.

In Cincinnati, I met Jini, who had just come from her sister's memorial service. When Jini's sister Margaret lost her job, she lost her health insurance. She developed cancer and had no access to diagnosis or treatment. She died unnecessarily. And that is tragic. And it is wrong.

The Affordable Care Act will cover people like Margaret. We all share responsibility to ensure that this vital health care reform law is properly implemented and that all governors, all governors, expand Medicaid coverage so no more Margarets die from lack of care. This is part of my pro-life stance and the right thing to do.

I have so many other stories but I’ll only tell you one more. In Hershey, Pennsylvania, a woman in her late thirties approached us. She asked for the names of some people she could talk to, because she felt alone and isolated. Her neighbors have been polarized by politics masquerading as values. She cares about the well-being of the people in her community.

Looking out at you tonight, I feel your presence combined with that of the thousands of caring people we met on our journey. Together, we understand an immoral budget that hurts already struggling families does not reflect our nation's values. We are better than that.

So I urge you, I urge you, join us on the bus. Join us together as we stand with Matt and Mark, Billy and his family, the woman in Hershey and the Margarets of our nation.

This is what nuns on the bus are all about: We care for the 100 percent, and that will secure the blessings of liberty to ourselves and our nation. So join us as we nuns on the bus, all of us, drive for faith, family and fairness.