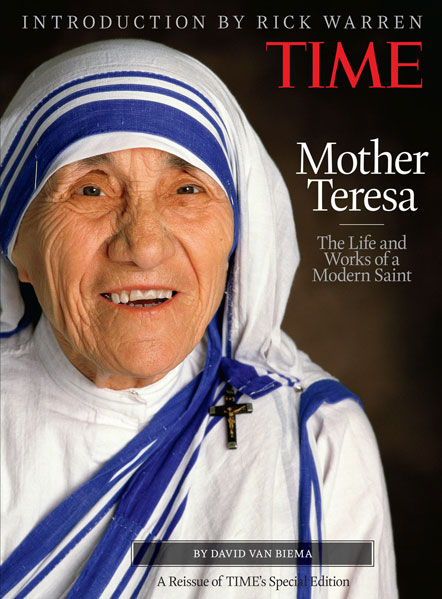 (RNS) On September 5, 1997, the world mourned when Mother Teresa, whose work with the poorest of the poor made her a global icon, died of a heart ailment at age 87. On September 5, 1997, the world mourned when Mother Teresa, whose work with the poorest of the poor made her a global icon, died of a heart ailment at age 87. Five years later, the world did a double take, when a volume of Teresa's private letters revealed that the tireless, smiling nun spent the last 39 years of her life in internal agony.

Exactly 10 years later, the world did a double take, when a volume of Teresa's private letters revealed that the tireless, smiling nun spent the last 39 years of her life in internal agony. Jesus, she wrote, no longer seemed present to her, in prayer or even in the Eucharist. In letter after tormented letter she described an unrelenting spiritual "dryness,” a "torturing pain." Her smile was "a big cloak" of deception. She admitted at one point to doubting God's existence. Eventually she apparently became more reconciled to her condition; but as far as we know, she died with it.

The news was disorienting. The late Christopher Hitchens, Teresa’s constant critic, claimed it proved she was a "confused old lady who … for all practical purposes had ceased to believe." Her Catholic Church remained unperturbed: Pope John Paul II had already alluded to her “inner darkness" as a "test" she had aced. Yet for many, the question remained: How, short of hypocrisy or a psychotic break, could such alienation coexist with such obvious devotion?

The paradox still shocks me. But lately I’ve encountered the same starkly binary voice -- in a set of 3,000-year-old poems. Written in around 1000 B.C., the 150 prayers in the Book of Psalms helped shape both Judaism and Christianity, are still memorized by some congregations, and live on in liturgy, hymnody and private prayer. Some are pure jubilation -- the word "hallelujah” originated in psalms. But just as many -- the “psalms of complaint” -- sound like … well, like the private Mother Teresa.

Here are Teresa's words, edited down from three letters:

Lord, my God, who am I that You should forsake me? The child of Your love -- and now become as the most hated one.

I call, I cling, I want -- and there is no One to answer. Darkness surrounds me on all sides. If there be no God -- there can be no soul -- if there is no soul then Jesus -- You also are not true -- Heaven, what emptiness. I am afraid to write all those terrible things -- they must hurt You.

Yet, deep down somewhere in my heart that longing for God keeps breaking through the darkness. Love in me for God grows more real -- I find myself telling Jesus unconsciously the most strange tokens of love. Let Him do to me whatever He wants. If my darkness is light to some soul, I am perfectly happy.

And here are key lines from Psalm 22:

My God, my God, why have you forsaken me? Why are you so far from helping me, from the words of my groaning? O my God, I cry by day, but you do not answer, and by night, but find no rest.

I am a worm, and not human. A company of evildoers encircles me. All who see me mock at me; 'Commit your cause to the Lord; let him rescue the one in whom he delights!'

Yet since my mother bore me you have been my God.

And I shall live for him. Posterity will serve him;
and proclaim his deliverance to a people yet unborn.

The psalms of complaint average about 80 percent lament, and 20 percent celebration -- with no transition. Their extreme inbuilt tension has driven some scholars to suggest that they were originally dialogues between pilgrims and priests, of which only the pilgrims' part survived: The priests' reassuring interjections -- the missing link -- got misplaced. (Some claim to have located the priests' "script" deep in the Book of Isaiah).

Yet Teresa's letters suggest that the two postures can exist simultaneously in one person -- or one poem. F. Scott Fitzgerald defined a "first-rate intelligence" as the ability to maintain two opposing ideas simultaneously. Soren Kierkegaard suggested that religious belief might be possible only by a "leap to faith." Both the Psalmist and Teresa seem to have combined Fitzgerald and Kierkegaard, deep hurt somehow cohabiting with vertiginous faith.

It’s a profoundly un-modern temperament; and predictably, the complaints receive less play in churches and synagogues than happier psalms. But they are still prayed by desperate people in dire straits -- people like Jesus, who quoted Psalm 22’s first, anguished words from the cross.

You can dismiss them as unsolvable puzzles. But only if you feel that what is unsolvable must be dismissed. Paid heed, their internal friction mesmerizes. They are more compelling to me than the psalms of thanksgiving, praise or wisdom.

Just as the 2007 Mother Teresa is more compelling than the 1997 model. A woman who does great works for God is a paragon. One who does them while overcome with loneliness and doubt is a fascination. Like the complaints, she may be less easily fathomed than the smiley Mother -- but once considered, she is harder to forget.

(David Van Biema, author of "Mother Teresa: The Life and Works of a Modern Saint," being reissued by Time Books, is working on a book about the Psalms for Simon & Schuster.)