Editor's note: This story has been corrected since it originally ran on Sept. 10 to include revised figures for embryo transfers.

(RNS) The embryo was frozen in liquid nitrogen when Gabriel and Callie Fluhrer found it. They didn’t know whether that embryo would grow to be a boy or a girl, or whether it would even grow at all. 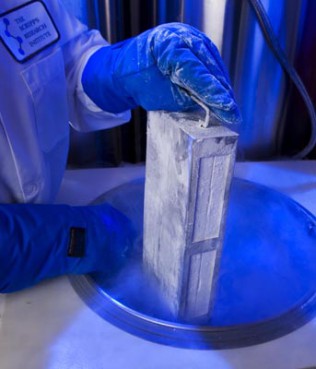 But to the Fluhrers, it was worth the risk. That tiny collection of cells was a baby, they believed. Of the hundreds of thousands of babies just like it, the Fluhrers believe, many will likely die if someone doesn't pluck them from the warehouse where they've been stored after their biological parents decided they didn't need or want them any longer.

“If we’re going to stand against abortion, it’s not simply picketing a clinic,” said Gabriel Fluhrer, a public relations and publishing coordinator for the Alliance of Confessing Evangelicals. “It’s doing the hard work of adopting the orphans around the world, whether embryos or orphans living in China.”

Anna Fluhrer was born in December 2010: from a frozen embryo to a healthy baby girl.

Conservative Christians have long joined hands to oppose abortion, often following the lead of the Roman Catholic Church. But evangelicals are leading the charge in adopting embryos, and encouraging people who have stockpiles of frozen embryos to make them available for adoption.

“These families are happy, and they tend to write blogs and Facebook,” said Reg Finger, a doctor affiliated with the National Embryo Donation Center, which relied on federal grants.

Vatican officials have stopped just short of banning embryo adoption, but it’s discouraged, because of its connection to in vitro fertilization — a practice banned by the church because it often includes disposal of unused embryos.

“It needs to be recognized that the thousands of abandoned embryos represent a situation of injustice that cannot be resolved,” Vatican theologians wrote in their 2008 bioethics treatise.

People who choose in vitro fertilization often create multiple embryos, and select the healthiest to implant. Some families discard the extras, or implant them at a time when they’re unlikely to survive. Those that choose to save them pay upwards of $400 per year to keep them frozen.

It’s estimated that there are more than 600,000 embryos frozen in storage in the U.S., but it’s not clear how many of those are available for adoption.

Embryo donation and adoption organizations, many of them with evangelical religious affiliations, began forming in the 1990s. The practice gained traction in 2006, when former President George W. Bush invited children who were adopted as embryos, known as “snowflakes,” to join him at the White House.

“These boys and girls are not spare parts,” Bush said, as the children and their parents gathered around him.

At the White House that day was Maria Lancaster and her daughter, Elisha, who was adopted as an embryo through Snowflakes, the embryo adoption division of Nightlight Christian Adoptions. In 2008, Lancaster opened the doors of her own embryo adoption agency, which is a branch of Cedar Park Church, an evangelical congregation near Seattle.

“I wanted to give weight to the idea that it is a responsibility of the church to stand up and defend all human life, including embryos in the freezer,” she said.

Federal officials say funding for the embryo adoption awareness campaign was cut because of “limited interest.”

In 2004, there were between 1,500 and 1,750 donated and adopted embryos transferred, Finger said. By 2010, the last year for which data is available, about 2,250 embryos were transferred. Finger said his data is provided by the Centers for Disease Control on his special request.

Embryo adoption is not a chief issue for many Christians, said Fluhrer,  but that may be  changing. He has blogged about embryo adoption on Reformation 21, a theology website he edits, and he encourages his church members to consider the option.

“The earliest Christians were distinguished by their care for those society discarded,” he wrote on his blog. “Embryo adoption seems to me a seminal way to do such a thing here in the third millennium.”