KANSAS CITY, Mo. (RNS At an early morning Mass here at St. Patrick Parish on Friday (Sept. 7), the Rev. Justin Hoye preached about judgment, saying people are incapable of admitting the absolute fullness of their own sins.

He didn’t mention Bishop Robert Finn, shepherd of the Diocese of Kansas City-St. Joseph. On Thursday, a judge in Jackson County found Finn, 59, guilty of one misdemeanor count of failing to report suspected child abuse, including the fact that Finn knew child pornography was on the computer of the Rev. Shawn Ratigan, who used to be pastor of St. Patrick’s. 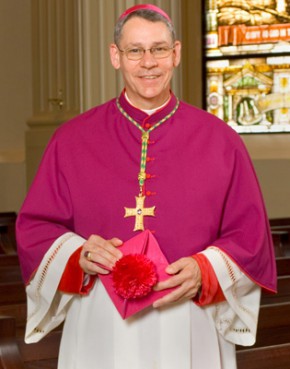 But it was clear that Hoye’s caution against judgment and prayers for healing were about Finn and the wounded congregation.

“We pray that the Holy Spirit might move throughout the diocese and grant us consolation and peace,” Hoye said. “We pray for the victims of injustice, those denied rights owed them.”

When the service was over, parishioners were polite but not as subtle about the court ruling.

“Maybe this will get different dioceses and bishops, everybody throughout the religious world, to realize they have a responsibility to basically do what Jesus taught us and that is take care of kids, to respect other lives,” said Steve Burk, 59, a retired Ford assembly line worker who attends Mass throughout the week.

Finn, a St. Louis native who was ordained in the St. Louis Archdiocese, is the first U.S. bishop convicted for failing to report criminal sexual activity by a priest.

The verdict is a landmark moment in a clergy abuse saga that has rattled the Catholic Church for more than a decade.

Critics of the church’s handling of the sex abuse scandal say they hope the ruling will be a seminal moment that brings greater reform.

“You’re tempted to think surely this will send a chill down the spine of hundreds of church employees who are concealing, or have concealed, child sex crimes,” said David Clohessy, head of the Survivors Network of those Abused by Priests. “It must be unsettling to see that even a bishop can be brought to justice.”

For some parishioners at St. Patrick’s, the incident has done nothing to shake their belief.

Mary Helm, 53, a registered nurse, stuck by the bishop.

“He is a good bishop,” she said. “We should try to pray for him and support him. There are a lot of people to keep track of. You can’t expect absolute perfection in everybody, except for God.”

Charles Lamb, 80, a former technician for Trans World Airlines, said there should be more outcries from the pulpit regarding the Finn case.

“All the priests should address this issue, probably now more than ever since the courts have decided,” he said.

Lamb said he thinks there are many people who won’t be satisfied until Finn is removed. “The real healing, in those people, won’t take place until he either resigns or is removed,” he said.

For his part, Hoye, 33, said after the service at St. Patrick: “If you ask other priests, most of us simply do not know what to say. I say that with a lot of confidence. One of the reasons we don’t is because we are feeling this out, just like the community is.”

He said there is a wide range of views, ranging from forgiving to livid.

“It’s difficult to address all that from the pulpit,” he said. “What do you do with it?”

Meanwhile, in St. Louis, where Finn grew up, reactions were muted.

Finn attended elementary school at All Souls Parish in Overland, and was later ordained a priest in the same church.

“The people of my parish are saddened by the news that he was convicted of this misdemeanor,” Burkemper said. “But it’s not something people are really talking much about.”

Finn arrived in Kansas City from St. Louis in 2005. By 2008, he was already dealing with the diocese’s abuse settlements, paying $10 million to settle abuse claims with 47 victims.

Finn apologized then for the “fully unacceptable behavior” that prompted the lawsuits and assured that new measures were in place “so that we may be confident there will never, ever be a repeat of the behaviors.”

But the crime that now will define his tenure in Kansas City occurred two years later.

In December 2010, a technician found hundreds of lewd photos of young girls on Ratigan’s computer. He told diocesan officials immediately. It turned out the priest had taken most of the photos himself, and Finn had known about accusations against the priest in the past.

Ratigan attempted suicide after the diocese learned about the images on his computer and was hospitalized. Finn later assigned him to a mission house in Independence with restrictions governing his access to children. After the priest repeatedly violated those restrictions, diocesan officials reported him to the police — five months after finding the child pornography on his computer.

Jackson County Circuit Court Judge John Torrence gave Finn a suspended sentence with no jail time. If the bishop completes two years of probation and complies with Torrence’s conditions, his record will be wiped clean of the conviction.

The Kansas City-St. Joseph Diocese has 133,000 Catholics in 98 parishes, less than a third of the size of the St. Louis Archdiocese.

Michael Halterman, chief executive officer of Catholic Charities in the diocese, which runs about 65 social service programs, said fundraising has taken a hit even though the nonprofit organization doesn’t foot church legal bills.

“We’ve been impacted by the legal issues of the bishop and the diocese, there’s no doubt,” Halterman said Friday in his Kansas City office. “Some donors said they wouldn’t give to us because of those issues. There’s no doubt we’ve felt it, and the bishop knows that. I’ve told him.”

Jack Smith, a spokesman for the diocese, said Finn was continuing with a full schedule. The bishop led a confirmation class after he was sentenced Thursday.

“He really is focusing on doing his job,” Smith said.

Outside the diocese office Friday, a handful of victims’ rights advocates called on Finn to be fired.

“I’m tired of being embarrassed by the bishops,” said Shirley Dobbins, 76, of Catholic social justice organization Call to Action. “I’m happy (Finn) was convicted, but I don’t believe the punishment was adequate. I don’t think the bishops will get it until some of them spend time in jail.”

But after Mass at St. Patrick’s, Hoye said that most of his parishioners will need more time to sort through how they feel about their bishop and the verdict against him.

Referring to St. Paul’s letter to the Corinthians, he said: “Everything that is hidden will be revealed. The Lord knows all the intimate details, so some prudence is in order. That does not mean ignore the conviction on this misdemeanor, but it will take time for people to make sense of what this means for them.”