(RNS) The typical American underestimates how many Protestants there are in the U.S., and vastly overestimates the number of religious minorities such as Mormons, Muslims, and atheist/agnostics, according to a new study. 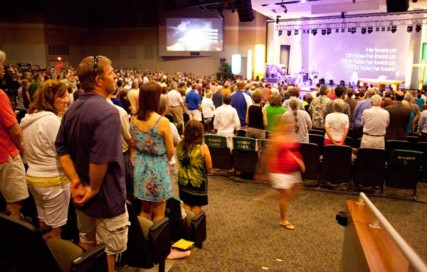 Grey Matter Research and Consulting asked 747 U.S. adults to guess what proportion of the American population belongs to each of eight major religious groups: Protestant, Catholic, Jewish, Mormon, Muslim, atheist/agnostic, believe in God or a higher power but have no particular religious preference, and any other religious group.

While Protestants make up more than half of the American population, Ron Sellers, president of Grey Matter Research, said there are several reasons why there is such a gross underestimation of their numbers.

“Protestant is an umbrella word that people don’t think of,” he said, noting that people are much more likely to identify with individual Protestant groups, such as Baptist, Methodist or Lutheran, rather than with the Protestant tradition as a whole.

Sellers also mentioned that with Mitt Romney running for president as a Mormon and the current emphasis on Islamic-American relations, “smaller faith groups also may be getting disproportionate media coverage.”

Respondents under the age of 35 were even more likely than older participants to underestimate the Protestant population. Dan Cox, research director for the Washington-based Public Religion Research Institute, said that may be because young people tend to have more friends who are religiously unaffiliated.

“The religiously unaffiliated and non-Christian groups are increasing, but we aren’t close to 30 percent of Americans identifying as unaffiliated or agnostic,” he said. “We are becoming more religiously diverse — that is entirely true — but we’re a long way from any of these numbers.”