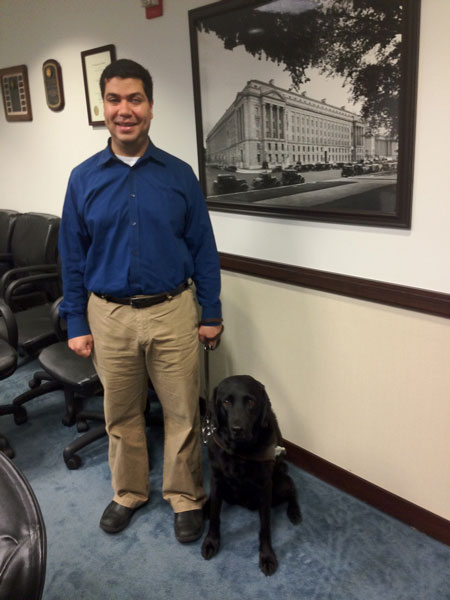 (RNS) Worshippers at Toronto's Salahuddin mosque are bracing for protests today (Sept 14) as part of "Walk Your Dog in Front of a Mosque Day."

The event is being organized by supporters of a man who claims Muslim protestors kicked his English mastiff, Cupcake, during an anti-Israel rally last month.

While claiming that they wanted to draw attention to Muslim attitudes toward dogs, the organizers’ Facebook page is replete with hostilities. One man wrote that he would throw protestors into a “lake of fire” and shoot their dogs, and the event has been promoted on a white supremacist website, StormFront.org.

Some Muslims responded with their own “Good Muslims Love Dogs” Facebook page, including at least one photo of a veiled woman with a veiled dog.

Muslims’ alleged canine-phobia is often cited by critics of Islam as an example of how the faith is incompatible with Western values. Some Muslims have perpetuated that narrative, such as when a Somali cab driver in Minneapolis made national headlines in 2007 when he refused to let a blind man bring his seeing-eye dog into his car.

Yet many Muslims all over the world have dogs, and dogs figure prominently is some Islamic countries, such as Turkey, famous for its Kangal and Akbash breeds. 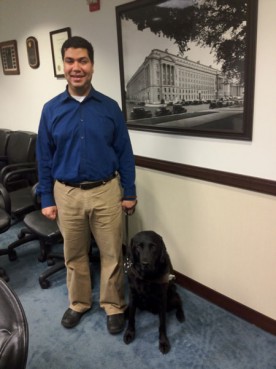 “This has always been a touchy issue for me, trying to balance my needs for a guide dog and the concerns within the Muslim community,” said Mazen Basrawi, a blind Muslim-American lawyer in Washington D.C., who has had two seeing eye-dogs since he was 18.

Islamic scripture and tradition does not provide a definitive guide to all matters canine.

The Quran mentions dogs twice, including the permission to eat meat that has been carried by hunting dogs. In another verse, a group of “believers” and their dog escape their persecutors by hiding in a cave, where they fall asleep. “And their dog stretched his forelegs across the threshold,” the verse finishes.

“This tender description of the dog guarding the cave makes it clear that the animal is good company for believers,” Ingrid Mattson, chair of the Islamic studies program at Huron University College, wrote last December in a column for The Huffington Post.

While many Muslims believe scripture approves canine companions, many also believe scripture discourages Muslims from keeping dogs in their homes. This belief is partly based on the Quranic verse describing the dog at the threshold of the cave, as well as a story in which the angel Gabriel breaks a rendezvous with the Prophet Muhammad because a puppy had wandered into Muhammad’s home.

“We angels do not enter a home in which there is a dog or a picture,” Gabriel tells the prophet.

There are also a few hadith, or sayings attributed to Muhammad, that are hostile toward dogs, including a couple in which he orders the killings of dogs. But Islamic scholars and other Muslims say that many hadith are fabricated or hard to verify, including those about dogs. And because these hadith contradict the apparent divine sanction for dogs in the Quran, these stories should not be trusted.

Zeyna Ahmed’s Egyptian parents wouldn’t let her have a dog as a child when she was growing up in New Jersey, saying that it was haram, or forbidden, under Islam. She didn’t believe them, but couldn’t change their minds. Instead, Ahmed walked the neighbors’ dogs behind her parents’ backs.

Ahmed got her first puppy, an American Staffordshire Terrier-Boxer mix, five years ago after she said her husband left her and her four young children. She said the dog was therapeutic for them.

“This is the one, loyal, consistent thing in their life,” said Ahmed, 45, who adopted a pit bull last year, and lets both dogs sleep in her bed. Ahmed said many of her Muslim friends have gotten dogs in recent years, although a few others won’t enter her home because of the dogs.

Basrawi, 33, has also developed a close relationship with his guide dogs -- the first a yellow lab named Regan, and his current black lab named Sebastian. “You have to trust your life with your dog,” said Basrawi. “They go everywhere you go.”

That includes mosques, where most worshippers have generally been friendly or tolerant towards his dogs.

“A lot of times people will come up and pet them,” said Basrawi, who usually ties his dog outside the mosque. Only on a few occasions has Basrawi been asked to move his dog away from a mosque.

Far less tolerant, Basrawi said, are Muslim-owned businesses, such as restaurants, and taxi drivers, who have refused his business. “It happens all the time,” he said.

It may be harder to change the minds of Islam’s critics, who often invoke Muslims’ alleged canine-phobia to demonize them.

“It must have been difficult for the Muslims stuffing the dogs with the bombs and detonators, considering how they loathe dogs. The sacrifices they make for jihad,” prominent critic Pamela Geller wrote in 2010, reacting to a story about how terrorists in Iraq had implanted bombs inside dogs they hoped to get on board a cargo plane, but failed.

Many Muslims in America are keeping an eye on the event in Toronto, hoping that their fellow Muslims react to protestors by wagging and not barking.

Sheila Musaji, who blogs at The American Muslim, encouraged worshippers to react kindly to those protesting —  by offering "flowers, or dog biscuits and water for their animals.”