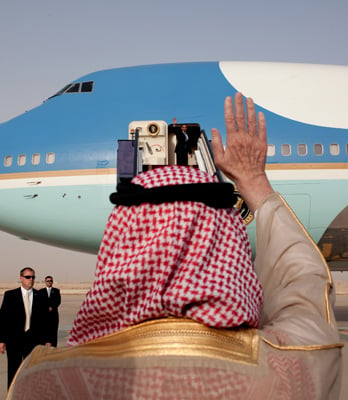 (RNS) As Muslim Americans try to make sense of the violent demonstrations in some 20 Muslim-majority countries triggered by an anti-Islamic film, President Obama and dozens of Muslim leaders will be attending the United Nations General Assembly in New York next week (Sept. 25-Oct.1).

One of those leaders will be President Mohamed Morsi of Egypt, the first country to protest against the film, and where demonstrators scaled the walls of the American embassy and replaced the American flag with a flag bearing the Islamic declaration of faith. President Obama waves goodbye from the steps of Air Force One as he departs King Khalid International Airport in Riyadh, Saudi Arabia on his way to Cairo, Egypt, June 4, 2009, where he called for a "new beginning" with the Muslim world. For use with RNS-MUSLIM-OUTREACH, transmitted April 12, 2010.

In July, advisers to Morsi, a leading member of the Islamist organization known as the Muslim Brotherhood, claimed that Obama had invited Morsi to a meeting when he visits the United States. The White House, the U.S. State Department, and the Egyptian embassies in Washington and New York, however, did not confirm such a meeting is planned for next week.

But after the violent protests, a meeting is warranted more than ever, say many Muslim Americans. Obama and Morsi have a lot to talk about, Muslim Americans say, from Islamophobia and human rights for religious minorities to Islamic extremism and cooperation.

Many Muslim Americans said Obama should ask Morsi to guarantee the rights of religious minorities in Egypt, where Coptic Christians and others face both official and informal discrimination.

Eboo Patel, president of the Interfaith Youth Core in Chicago, said Obama should ask Morsi how he would ensure that all Egyptians' rights are respected.

Asma Afsaruddin, chair of the Department of Near Eastern Studies and Cultures at Indiana University, said Obama should ask Morsi how he will curtail sectarian violence and promote understanding between Muslims and Copts.

“Peaceful co-existence of religious communities is after all recognized and celebrated within Islam -- how can you help to better realize this objective in contemporary Egypt?” Afsaruddin said.

“I would like to see Obama express his hopes that the new Egyptian constitution will grant Christians and others in Egypt the same freedom to practice religion and participate in civil society as is granted to Americans under the First Amendment,” said Imad-ad-Dean Ahmad of the Minaret of Freedom Institute in Bethesda, Md.

Not surprisingly, many observers said Obama should press Morsi to fight Islamic extremism.

Alaa Badr of the Muslim Association of Puget Sound in Redmond, Wash., said he hoped Obama would ask Morsi about Egypt’s commitment to fight terrorism, especially in North Africa.

Ahmed Ahmed, an Egyptian-American comedian, wants Obama to ask Morsi if Egypt will ever be a country with freedom of speech.

Wajahat Ali, a Muslim-American activist and playwright, suggested Obama be short and direct, but acknowledge America’s problem with Islamophobia. “You reign in your extremists, and I'll reign in ours,” Ali said.

Many Muslims and non-Muslims said Obama should tell Morsi that most Americans are not anti-Muslim, but that he would speak more forcefully against Islamophobia.

Qamar-ul Huda, a senior officer at the Religion and Peacemaking Center at the U.S. Institute of Peace in Washington, said Obama should say that “The U.S. government and society at large does not reflect the hysterical and outrageous Islamophobic sentiments of the few.”

“He needs to talk about Muslims in the U.S., to show that the U.S. is not at war with Islam,” said Hussein Rashid, an Islamic studies lecturer at Fordham University.

Several Muslim Americans said Obama should also get back to diplomatic basics, such as America’s and Egypt’s long history of cooperation.

“He has to return to the theme of an ally, and talk about the reciprocal nature of that relationship,” said Rashid.

Huda said Obama should pledge to support Egypt while also demanding that it respect basic human rights. “The U.S. stands with all young emerging democratic societies and we will be supportive in all of its stages of growth,” said Huda, describing what he thinks Obama should tell Morsi. “Our nations share a common heritage in areas of culture, education, economics. Let us build on our common interests and goals, and when we differ, let us remind ourselves this is natural and healthy for our friendship.”

One way to fight Islamic extremism, many Muslims say, is with jobs, especially for young people. According to a 2011 report from the Pew Forum on Religion and Public Life, about 60 percent of Muslims in Muslim-majority countries were under 30 in 2010, but many of these youth are unemployed and vulnerable to extremism.

With that in mind, al-Husein N. Madhany, an associate at Samasource.org, an employment website focusing on the developing world, said Obama should focus on three things: “Jobs, jobs, jobs.”

Other issues that observers wanted Obama to raise with Morsi included the Israeli-Palestinian conflict, Iran’s nuclear program, and protection for American embassies and diplomats. There were a few observers, however, who said Obama should stay mum.

“Perhaps Obama should not say anything. Maybe he should listen to what Morsi has to say,” said Sherifa Zuhur, director of the Institute of Middle Eastern, Islamic, and Strategic Studies in Carlisle, Pa.