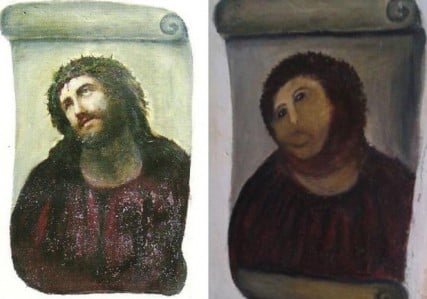 Chutzpah alert: The Spanish fresco that was “restored” (a.k.a. ruined) by a well-intentioned grandma has become a big tourist draw – and now the octogenarian wants a cut. For charity, of course.

A Catholic bishop argues for ordaining women – as deacons. Not a slippery slope, he says.

So Obama is for the “redistribution” of wealth, according to a 14-year-old audio clip being sent around by the Romney campaign. Vincent Miller digs up a three-year-old encyclical that shows Benedict XVI may be for the same thing, only more so.

Sister “Nuns on the Bus” Simone Campbell is a star-struck star: she gushes about receiving a call from the POTUS after her well-received DNC speech:

“He started off by saying that I might be the most popular person in the United States and I said that I hoped not more popular than he is.”

Jewish voters still like Obama. The poll did not ask about Sister Simone.

The Franciscan in charge of holy places in the Holy Land is worried about Jewish attacks on Christian sites and symbols.

A Vatican meeting will consider whether Christians of different churches can do pulpit swaps.

Did a Tulsa megachurch cover up for employees who sexually abuse children?

Cheerleaders in Texas want to give God the ol’ “zis boom bah” but believers in church-state separation don’t have the same school spirit.

Speaking of polls and journos, public distrust of the media is at an all-time high. Don’t believe me? Gallup has the true facts.

Missouri was once a Promised Land for Mormons, and is now more a place to work out their issues with the U.S.

American Sikhs want the Justice Department to track hate crimes against their community.

Warren Throckmorton, whose blog has led the evangelical fight against “reparative therapy” for gays and overreadings of America’s Christian roots, is recovering from a heart attack.

A nun who should be better known: Sister Mary Rose McGeady, who rescued Covenant House from scandal and untold numbers of children from the streets, has died.

You don’t have to trust the media to enjoy the Religion News Roundup every day, free. Just enter you email in the box below.

Photo credit: “Ecce Homo,” before and after, via Wikipedia 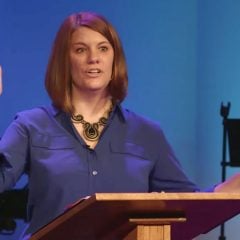 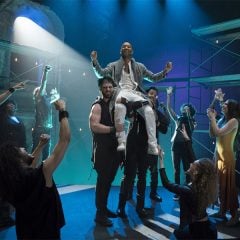 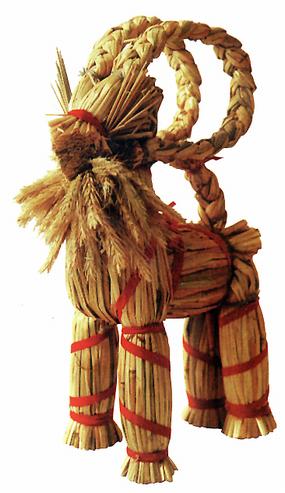