(RNS) President Obama’s support among Catholic voters has surged since June, according to a new poll, despite a summer that included the Catholic bishops’ religious freedom campaign and the naming of Rep. Paul Ryan, a Catholic, as the GOP's vice-presidential candidate.

On June 17, Obama held a slight edge over Mitt Romney among Catholics (49-47 percent), according to the Pew Research Center. Since then, Obama has surged ahead, and now leads 54-39 percent, according to a Pew poll conducted on Sept. 16.

(Left) President Barack Obama attends a ceremony commemorating the 11th anniversary of the Sept. 11, 2001 terrorist attacks on the Pentagon, Sept. 11, 2012. (Right) Mitt Romney speaks to crowd in Nashua, NH during a rally for Romney Ryan 2012.

Among all registered voters, Obama leads Romney 51-42 percent, according to Pew.

Obama and Romney are essentially tied among white Catholics, which some pollsters call the ultimate swing group.

From June 21-July 4, the U.S. Catholic bishops held a “Fortnight for Freedom,” with Masses, prayer groups and presentations in dozens of dioceses nationwide. The campaign was directed in part against an Obama administration mandate that requires some religious institutions, such as colleges and hospitals, to provide cost-free contraception coverage to employees.

John C. Green, an expert on religion and politics at the University of Akron in Ohio, said Obama's surge among Catholic voters does not mean the bishops' campaign was ineffective. But religious freedom is not the most salient issue for Catholics during an election dominated by economic concerns, he said.

“It's not the issue that most middle-of-the-road Catholics are responding to,” Green said.

In mid-August, Romney named Ryan, a congressman from Wisconsin and lifelong Catholic, as his vice-presidential nominee. While many conservative Catholics cheered the move, Romney received no “Catholic bounce” from selecting Ryan, according to the Pew poll. Obama's vice-presidential running mate, Joe Biden, is also Catholic. 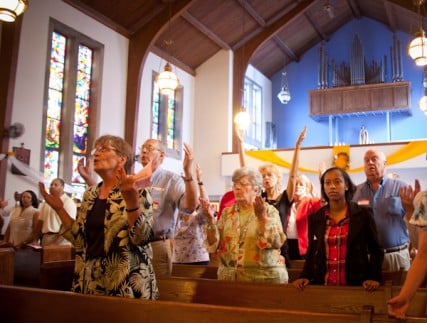 Liberal Catholics, including some nuns, have chastised Ryan for using his Catholic faith to defend his GOP budget plan, which lowers taxes on the wealthy while cutting programs for the poor.

Among white evangelicals, another crucial religious constituency, Romney’s support has inched up since July, from 69 to 74 percent, according to the Pew poll, while Obama's percentage declined.

Despite concerns that Obama's support for same-sex marriage would alienate African-American Protestants, 95 percent still back Obama over Romney.

The margin of error for the September survey of Catholic voters is plus or minus 5.1 percentage points, according to Pew.