ASSISI, Italy (RNS) Swimming against a global tide of religious violence and political polarization, about 550 religious and humanitarian leaders met recently here in the birthplace of St. Francis to propose a new way forward: love and forgiveness. 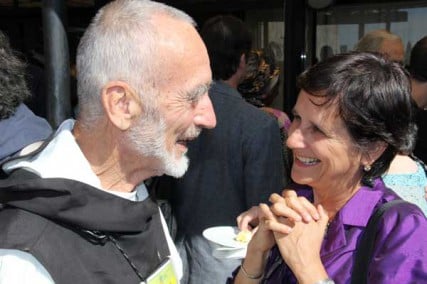 The ambitious aim of the Sept. 19-23 “Global Gathering” was nothing short of putting those values to work in some of the most hate-filled and unforgiving places on Earth. Following the example of Francis, whose feast day is Thursday (Oct. 4), participants pledged to make lofty ideals real through dozens of creative projects researched and funded by the Michigan-based Fetzer Institute, the conference convener.

“There’s a power in love that our world has not discovered yet,” said Fetzer President and CEO Larry Sullivan, quoting the Rev. Martin Luther King Jr. “Let’s put our backs into the work of love and forgiveness.”

Fetzer already has poured $4.5 million into the work of 16 advisory councils representing disciplines from the arts, education and engineering to health, natural sciences and religion and spirituality. Over a year and a half, the councils have highlighted about 150 exemplary projects, of which Fetzer has funded 60 through August. 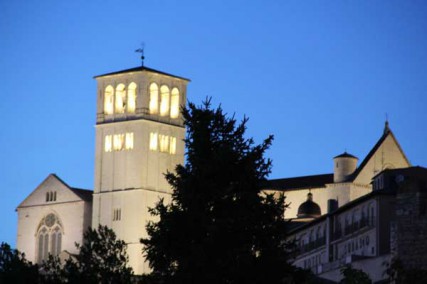 The Basilica of St. Francis provided a dramatic backdrop to the Fetzer Institute Global Gathering in Assisi.

They include parents in Uganda forgiving rebels who abducted, tortured or killed their children; bereaved Israeli and Palestinian families working to reconcile with each other; and San Quentin prison inmates learning how to listen to each other and forgive themselves.

More Fetzer-backed projects will emerge over the next few years based on ideas growing out of the conference, Sullivan said. A panel of experts will work with the councils to build on existing projects and develop new ones to heal hatred and relieve suffering.

“This is a lesson-catching group,” he said. “The next (step) is to apply those lessons to solutions that don’t yet exist.”

One clear step was announced at the conference: awards of $25,000 and $5,000, determined through online nominations, for nonprofit agencies whose work exemplifies love and forgiveness.

Many who attended this summit said they were inspired and encouraged by meeting with other like-minded people from 43 countries. Some went there slightly embarrassed by the Hallmark-ish “love and forgiveness” theme, but found it powerfully palpable in the serene mountainside environs of St. Francis.

Krista Tippett, host of American Public Media’s “On Being,” called it “a profoundly countercultural gathering,” highlighting world-changing work that is “too often invisible.”

“It has this ripple effect of emboldening everybody else who’s here, to go out and feel that much more powerful and know they’re not alone,” Tippett said.

Others echoed her view that people’s shared stories and creativity formed a critical mass of hope. 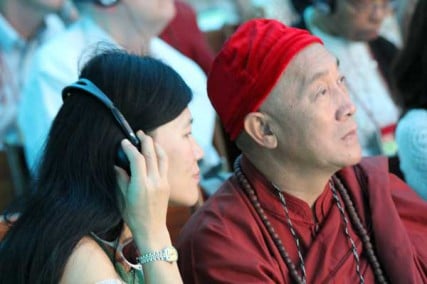 Hsin Tao, founder of the Museum of World Religions in Taiwan, listens to the proceedings with an assistant.

“I’ve never been under one roof with so many heroes,” said Mohammed Abu-Nimer, a conflict resolution specialist from American University’s School of International Service. “I wish I could take them with me to Washington, to the Congress.”

Still, he and others cautioned love and forgiveness are no cure-all for political realities and unjust systems. “Is it realistic to talk about forgiveness and love in the context of Israel and Palestine?” he asked.

Alistair Little, who spent 13 years in prison as a former Protestant paramilitary combatant in Northern Ireland, said forgiveness is not always necessary to effect change, nor does violence always mean an absence of love.

“We have to find a way to work where people aren’t talking about love, or even thinking about love and forgiveness,” said Little, director of Beyond Walls, a conflict resolution organization.

Even so, many gave moving testimonies to the power of those values.

Angelina Atyam told of having her 14-year-old daughter abducted and held captive for seven years by the Lord’s Resistance Army in Uganda. Prayer allowed her to let go of her anger, to forgive her daughter’s captors and to co-found a peace-building network of more than 5,000 parents.

“My strength, my freedom, was when I was able to say, ‘I’ve forgiven the rebels,’“ Atyam said.

— Grow Dat Youth Farm, which hires New Orleans high schoolers to grow and sell organic food and prepare it for the needy;

— The Peter C. Alderman Foundation, named after a victim of the 9/11 attacks, which provides mental-health services to survivors of mass violence;

The challenge to participants was how to put the inspiration of Assisi back to work in the real world. As prison reformer Jacques Verduin put it to the group, “Now that we’ve found love, what are we going to do with it?”

“I think it has the potential to be historic,” said Volf, director of the Yale Center for Faith and Culture. “I hope Fetzer will continue to be involved in such a way as to create a whole movement of people, and therefore change the course of history.”

Opinion
How do we talk to young people about Israel and the Palestinians?

Opinion
Jews need to get woke