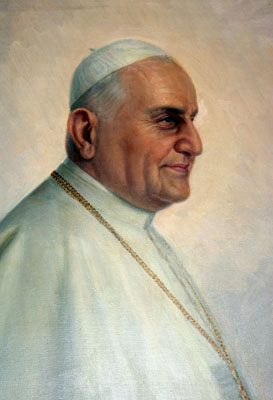 (RNS) Fifty years after Pope John XXIII convened the Second Vatican Council that revolutionized the Catholic Church, will the jolly man known as the "Good Pope" be declared a saint of the Roman Catholic Church? Perhaps the better question is: Should he be? 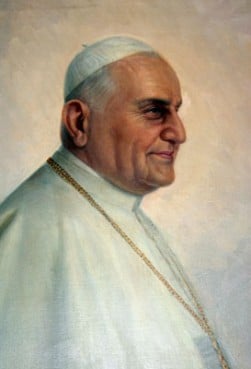 Pope John XXIII. From a painting in the Casa Santa Maria dell?Umilta of the Pontifical North
American College, Rome.

On the evening of June 3, 1963, John XXIII passed into eternity with his family, doctors and household staff present in the papal apartments where he had lived for four and a half years. The Vatican press office issued this terse statement: “He suffers no more.”

Immediately, there was a movement by some close to the deceased pope to have him canonized by acclamation, as saints had been during the early centuries of the church. The first session of the Second Vatican Council (1962-65) had ended in December 1962, and the pope had published his landmark encyclical letter, Pacem in Terris (Peace on Earth) in April 1963.

He was beloved by people throughout the world who understood the historic significance of his brief pontificate and of his council project.

It was reported at the time that Belgian Cardinal Leo Suenens, who was close to John XXIII and a leading voice in the council, favored a quick move to proclaim him a saint, eschewing the lengthy processes that could sap the energy and enthusiasm from the cause. Suenens said people needed new and contemporary figures as models of sanctity to inspire them in their spiritual lives. 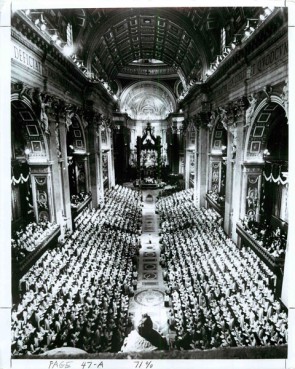 Vatican City -- Prelates and religious dignitaries from around the world fill St. Peter's Basilica as a concelebrated Mass opens the Second Vatican Council on Oct. 11, 1962.

A proposal was circulated among the bishops, urging quick action, but traditionalist leaders and the Vatican’s Congregation for the Causes of Saints won the day. John XXIII’s successor, Pope Paul VI, announced in 1965 that two sainthood causes would be opened: for both Pope Pius XII and John XXIII. Two investigations began, one of which culminated in 2000 with John XXIII being beatified, or proclaimed “Blessed,” the penultimate step to sainthood.

Only 80 of the 264 popes are officially recognized as saints (not counting St. Peter himself, but among his successors as bishop of Rome). In the past 400 years, ever since the church strictly formalized the process for canonization that includes investigations and verifications of miracles, only two popes have been declared saints: Pius V (16th century) and Pius X, the first pope of the 20th century.

So, despite the enthusiasm of the rank and file and even many highly placed supporters, the chances for any pope achieving sainthood are surprisingly slim.

John XXIII is different, however. When his body was transferred from the papal crypt beneath St. Peter’s Basilica and reinterred beneath the Altar of St. Jerome on the main floor of the basilica in 2001, some 40,000 people attended the ceremony. 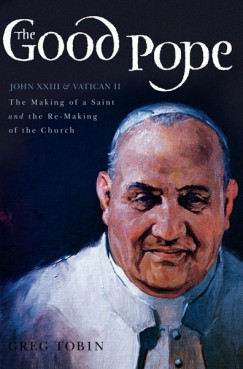 Greg Tobin, the vice president for university advancement at Seton Hall University in South Orange, N.J., is the author of the new book "The Good Pope: John XXIII & Vatican II."

When his coffin was reopened, John XXIII’s physical remains were remarkably uncorrupted. After less than a day of work on the corpse, those present saw the face of John XXIII. Cardinal Virgilio Noe, who oversaw the project and was responsible for the “physical plant” of the Vatican, described the late pope's face as “intact and serene.” He said witnesses present at the opening of the coffin were overcome with emotion.

The historical circumstances of John XXIII's reign on the Throne of St. Peter and his personal sanctity -- well-attested and recorded during his lifetime and verified after -- have brought the "Good Pope" to the threshold of sainthood. The world only awaits verification of a post-beatification miracle credited to his intercession, as required by the rules.

I have no doubt that he will pass the final hurdle and “qualify” as a saint with flying colors, perhaps as soon as the 50th anniversary of his death, in 2013. Why? John XXIII’s Second Vatican Council was, in itself, nothing short of a miracle.

Inspired, as Catholics believe, by the Holy Spirit, John XXIII’s council saved the Catholic Church from perhaps inevitable calcification and possible collapse. Every once in a while, say, every 300 to 500 years, the church has needed to re-examine itself and its place in the world and “get its act together.” That’s what happened at Nicaea in the 4th century and Trent in the 16th century -- and most certainly at Vatican II in the 20th.

Unblinking, and with a smile, even as he sought to reform and reclaim his cherished church, he walked with charity and humility always, through some of the darkest days of world history, as a young priest and soldier, as a diplomat and pastor, as a successor of St. Peter. The evidence of his inner life is revealed in his "Journal of a Soul," a masterwork of religious writing and reflection that ought to be more widely read today.

Even so, John XIII is a saint, acclaimed by many throughout the world already. They don’t need the official stamp of approval of the Vatican hierarchy to verify what is already written on their hearts. Greg Tobin, the vice president for university advancement at Seton Hall University in South Orange, N.J., is the author of the new book "The Good Pope: John XXIII & Vatican II." He is also the author of "The Wisdom of St. Patrick," "Saints and Sinners," and "Holy Father," a biography of Pope Benedict XVI.

(Greg Tobin, the associate vice president for university advancement at Seton Hall University in South Orange, N.J., is the author of the new book "The Good Pope: John XXIII & Vatican II." He is also the author of "The Wisdom of St. Patrick," the novels "Conclave" and "Council," and "Holy Father," a biography of Pope Benedict XVI.)