Billy Graham offered to “do all I can to help” GOP presidential candidate Mitt Romney in a Thursday (Oct. 11) meeting at the evangelist's North Carolina home.

(RNS) Billy Graham offered to “do all I can to help” GOP presidential candidate Mitt Romney in a Thursday (Oct. 11) meeting at the evangelist's North Carolina home.

Romney campaign spokesman Rick Gorka told reporters after the visit that Graham told Romney: “I'll do all I can to help you. And you can quote me on that.”

Graham spokesman A. Larry Ross, who was not at the meeting, confirmed Friday that the evangelist made the comment privately to Romney.

“Throughout his ministry, Mr. Graham has been careful to remain nonpartisan, but at the same time has consistently been an advocate and taken a strong stand for biblical values,” Ross said.

Graham issued a statement after the meeting, which included his son, evangelist Franklin Graham, saying the nation is at a “crossroads” as Election Day approaches.

“I hope millions of Americans will join me in praying for our nation and to vote for candidates who will support the biblical definition of marriage, protect the sanctity of life and defend our religious freedoms,” said Billy Graham, who turns 94 the day after the Nov. 6 election.

Although the statement was not an outright Romney endorsement, the issues it raised have been touted by Republicans during the campaign. President Obama has said he personally supports same-sex marriage. Obama’s campaign faith platform describes him as “pro-choice” and seeking “common-ground” ways to reduce the rate of abortions.

The 30-minute session at Graham’s home near Asheville, N.C., comes as polls show evangelical pastors warming to Romney despite some who have stated a discomfort with his Mormon faith. A LifeWay Research poll this week showed two-thirds of evangelical pastors plan to vote for Romney, compared to 54 percent of mainline Protestant pastors.

Obama, who visited Graham in 2010, was backed by 9 percent of evangelical pastors and 28 percent of mainline pastors. Twenty-two percent of Protestant pastors remained undecided.

A recent poll by the Pew Forum on Religion and Public Life found that white evangelical support for Romney had risen from 69 to 73 percent, while their support for Obama declined. A recent Public Religion Research Institute poll showed that 69 percent of evangelical voters said they would vote for Romney. 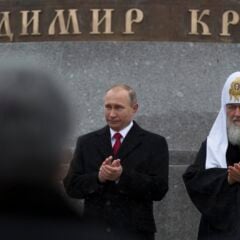 Faith
How Putin’s invasion became a holy war for Russia
Follow us on Facebook!
Submit your photos to RNS