(RNS) Leaders of the Seventh-day Adventist Church on Tuesday (Oct. 16) said recent decisions by two regional bodies to allow ordained female pastors were "serious mistakes," and women who are ordained won't be recognized -- at least for now. 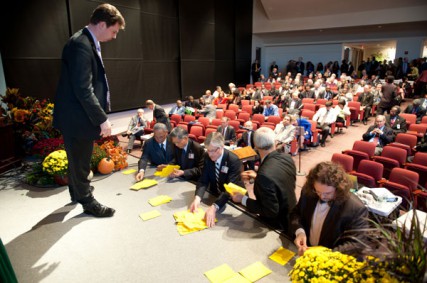 Todd McFarlane of the Office of General Council looks on as leaders of the executive secretary's office count the ballots during the afternoon business session of the Seventh-day Adventist Church on Tuesday, October 16.

“They directly challenge two world Church decisions on the matter of ordination,” reads a statement, passed by a 264-25 vote during the Annual Council meeting in Silver Spring, Md. “They create doubts about the importance of collective decision-making as a basic feature of denominational life.”

The decisions by the Maryland-based Columbia Union Conference and the California-based Pacific Union Conference came as the worldwide church is in the midst of a broad study of the “theology of ordination” that is expected to be considered at the denomination’s 2015 General Conference Session. 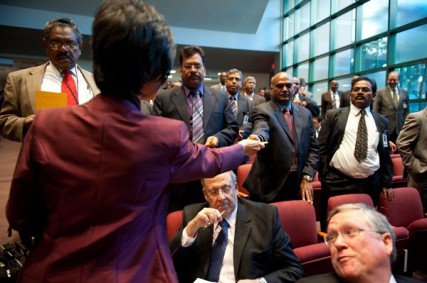 An usher distributes secret ballot voting cards during the afternoon business session of the Seventh-day Adventist Church on Tuesday, October 16.

In 1990, the General Conference Session, the highest authority of the church, approved a recommendation that prevented authorizing ordination of women to ministry. That was followed by a 1995 rejection of a request by the North American Division to permit regional groups to authorize ordination regardless of gender.

In their new statement, Adventist leaders noted that they were dealing with church “structure and procedures,” and not specifically addressing ministerial ordination.

Gerry Chudleigh, spokesman for the Pacific Union Conference, said leaders and members in his region were “grateful that the world church leaders took no punitive action against the unions that recently voted to ordain both men and women.” Since its August decision, that regional group has approved 14 women pastors for ordination and most of them have already been ordained.

Columbia Union Conference spokeswoman Celeste Ryan Blyden said members of her region were encouraged that “this topic is back on the agenda of the worldwide church.” Since its July decision, one woman pastor has been ordained and 14 others have been approved for ordination.

Garrett Caldwell, a spokesman for the world church, said current women pastors will continue to serve “but declarations of ministerial ordination for them will not be recognized until such an action is in harmony with a decision by a General Conference Session.”