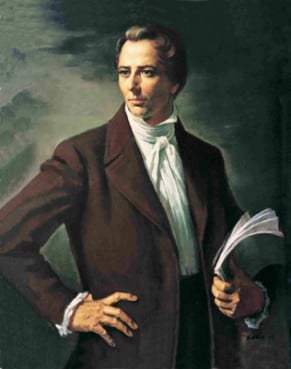 (RNS) Joseph Smith founded the Mormon faith after he said he was visited in a grove of trees by God and Jesus; he was the first Mormon to run for president, but not the last. RNS file photo courtesy of the Museum of Church History and Art/The Church of Jesus Christ of Latter-day Saints.

(RNS) For all the political hubbub over Mormonism, you might have thought Mitt Romney and Jon Huntsman are the first Mormons to run for president.

In fact, 11 Latter-day Saints have campaigned for the White House, including the faith's founder, Joseph Smith.

A barrage of bullets cut short Smith's campaign in 1844. He was the first presidential candidate to be assassinated, according to historian Newell G. Bringhurst, author of “The Mormon Quest for the Presidency.”

Some of the obstacles Smith faced, however, live on.

In a July Gallup Poll, 22 percent of Americans said they would not vote for a Mormon presidential candidate, a figure that has hardly budged since 1967. Earlier this month, a prominent pastor who backs Texas Gov. Rick Perry for president called Mormonism a “cult.” Romney shrugged off the insult, saying he has heard worse.

Joseph Smith heard worse, too. A study of his short-lived campaign demonstrates that anti-Mormon sentiment is rooted deep in American history.

“Quite ordinary people were roused to levels of hatred and fear they never reached at any other time,” writes historian Richard Lyman Bushman in “Joseph Smith: Rough Stone Rolling: A Cultural Biography of Mormonism's Founder.”

Six months into his presidential campaign, Smith was murdered by an angry mob in Carthage, Ill. Some historians believe his White House run incited fears of a looming Mormon theocracy.

“It was not a hatred of the alien,” writes Bushman. “It was more a fear of the familiar gone awry.”

Then, as now, it was theological _ not political _ disagreements that agitated many of Mormonism's opponents, said Adam Christing, director of a documentary about Smith's campaign.

Smith sought to dramatically change Christianity, introducing novel concepts and new scriptures, such as the Book of Mormon. Many Christians branded him a heretic.

“Some of the same language they were using in the 1830s about Mormons you still hear today,” Christing said.

In some ways, Smith was already a seasoned politician: the mayor, chief magistrate and militia leader of the Mormon settlement in Nauvoo, Ill.

But the self-described “rough stone” was a long-shot presidential candidate.

Smith was unschooled and unpolished, had been imprisoned for treason, and anti-Mormon mobs had chased his church out of Missouri. Rumors that he was a power-hungry polygamist followed him like feral dogs.

Still, Smith had the uncanny confidence of a prophet, and remained convinced that his candidacy would benefit the country and the Church of Jesus Christ of Latter-day Saints.

After his church warred with Missourians, Smith and other Mormon leaders pleaded to President Martin Van Buren for protection. Van Buren declined to help, saying that he could ill afford to lose Missouri's votes in his re-election bid.

Frustrated, Smith wrote to the leading presidential candidates in 1843, asking only one question: What would their Mormon policy be? Since none would commit to protecting the embattled church, Smith and other Mormon leaders decided he should run.

“I would not have suffered my name to have been used by my friends on anywise as president of the United States or candidate for that office if I and my friends could have had the privilege of enjoying our religious and civil rights,” he said.

Historians disagree about whether Smith thought he could win. Some say he only hoped to get some good press, gain Mormon converts and play kingmaker in Illinois, where the resettled Mormons were known to vote as a block.

Other historians argue that Smith committed all his church's resources to a serious campaign.

At a time when violent mobs ran roughshod over minority rights, Smith hoped to build a “coalition of the oppressed,” Bringhurst said. His platform was tailored to gain support from abolitionists, free blacks, Catholics and other besieged groups.

Smith favored neutrality in foreign affairs, absolute freedom of religion, abolition of slavery, low taxes and prison reform. He also wanted to cut Congress in half and grant the president “full power to send an army to suppress mobs.”

To spread the message, more than 330 Mormon missionaries fanned out across all 26 states and the Wisconsin territory with pamphlets bearing “General Smith's Views.”

They spent as much time preaching about Mormonism as they did promoting Smith's campaign, historians say.

“It's hard to draw a distinction between when they were speaking in the name of the church and when in the name of their candidate,” said Richard Bennett, associate dean of religious education at Brigham Young University in Provo, Utah.

Smith himself left little room between his roles as prophet and politician. “He was just totally insensitive to the separation of church and state,” said Bushman.

“He believed he was an instrument in the hands of God to restore God's kingdom on earth,” Christing added. “He was almost a King David figure.”

While campaigning for president, Smith also established the Council of Fifty, a kind of shadow government that would lead Mormons to safer ground out West, where they would prepare for the Second Coming, which Smith expected to arrive soon.

It was an exercise in extreme cognitive dissonance: running for president while believing the end was nigh.

Smith never saw either vision realized. He was jailed for destroying a printing press run by Mormon dissenters and later accused (again) of treason. Local leaders feared his growing political and ecclesiastical power.

“The fact that he ran for president was like the final straw,” Bringhurst said.