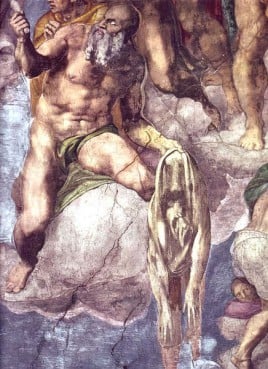 As Hurricane Sandy retreats, many stop to ponder the meaning of such devastation. What is a religious response? Proof of God’s judgment? Or God’s absence?

Sandy has cast a pall over Halloween this year, in some places. But maybe that will remind us of the reason for the season – and that awareness of mortality could improve our outlook, writes Oliver Burkeman in Slate.

(Question: Will any kid manage to make a Hurricane Sandy costume? Now that would be a nice finger in the eye of that storm.)

Southern Baptist leader Richard Land endorses Mitt Romney – though he vowed not to endorse anyone.

Pollsters and politicians hunting for the rare and elusive undecided voter might want to train their sights on the pulpit.

In other dispatches from the culture war trenches:

Is the Reformation over? Or reigniting? The Vatican floats the idea of setting up a special Lutheran church inside the Roman Catholic Church.

It’s only 495 years old…On this date in 1517, Martin Luther played trick-or-treat on the Catholic Church, nailing his 95 theses to the door of the cathedral in Wittenberg. Or maybe not quite. Either way, he started something big.

Just five years earlier on this date, Michelangelo officially finished something big: the astonishing frescoes on the Sistine Chapel ceiling.

Pope Benedict XVI will celebrate vespers in the chapel this afternoon to mark the 500th anniversary of the paintings. The director of the Vatican Museums assures us that the hordes of tourists that flock through the relatively small space each day don’t damage the art. (I was one of those hordes last September, and count me unconvinced. Return it to sacred use only? It’s an idea, says I.)

“Saint James” Bond? The Vatican newspaper gushes over the new 007 flick. Yes, you read that right. Except they like that he is human enough to shed tears. “License to cry”? Count me shaken by this, not stirred.

And finally, don’t forget to parse the multifacted Theology of the Great Pumpkin here and here:

No trick, just a treat – load your email address into the box below and get the Religion News Roundup free, every morning.

Photo credit: Via Wikipedia, a detail from Michelangelo's "Last Judgment" on the altar wall of the Sistine Chapel -- completed 20 years after the famous ceiling.