MYRTLE BEACH, S.C. (RNS) The night before the Diocese of South Carolina announced its secession from the Episcopal Church two weeks ago, the Rev. Tom Woodle met with members of his Myrtle Beach church, The Well by the Sea.

He wanted to warn them and tell them what he knew. Most of his parishioners were relieved and felt the change was long overdue, Woodle said.

The Diocese of South Carolina severed ties with the Episcopal Church on Oct. 17 after a long battle over theology and homosexuality, particularly the blessing of same-sex unions and the ordination of openly gay bishops. 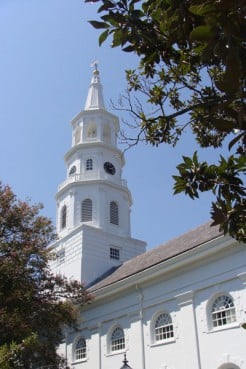 St. Michael's, a church within the Diocese of South Carolina, is 1 of the 2 most prominent Episcopal churches in Charleston, S.C.

South Carolina church officials said the final split was triggered by disciplinary action taken against Bishop Mark Lawrence, its conservative leader, who was found guilty of “abandoning the church” by an Episcopal disciplinary board.

Under Lawrence, the South Carolina diocese — which covers the eastern half of the state — has legally and theologically distanced itself from the Episcopal Church, removing references to the the national church in civil and church documents. It has also renamed itself The Protestant Episcopal Church in the Diocese of South Carolina.

Individual churches in the Diocese of South Carolina will decide whether to follow Lawrence to the new diocese or stay with the Episcopal Church at a meeting in Charleston on Nov. 17.

A spokeswoman for the national church, Neva Rae Fox, has said even if leaders or individual members of a diocese leave, the diocese itself stays within the Episcopal Church.

Woodle said any church that wishes to remain in the Episcopal Church — which is effectively the U.S. branch of the worldwide Anglican Communion — can make that move, though he only expects five or six to do so. The problems between the diocese and Lawrence run deeper than disagreements over homosexuality and church property, he said.

“The press has made this out to be only about openly gay bishops and priests, but we see that as a symptom of a flawed Christology in the Episcopal Church,” Woodle said. “The overwhelming majority in the denomination are revisionists. What they’ve decided is that Jesus is a way, a truth and a life, not the way, the truth and the life.”

The breakaway diocese is now looking to be associated with an international body of Anglicans who follow a more traditional line.

On Wednesday (Oct 31), the Global Anglican Future Primates Council sent a letter of support to Lawrence. “We continue to recognize you as a faithful Anglican bishop and the Diocese of South Carolina as part of the One, Holy, Catholic and Apostolic Church. ” The letter from the conservative group founded by Anglicans in the Global South was signed by Archbishop Eliud Wabukala of Anglican Church of Kenya and Archbishop Peter Jensen of Sydney, Australia.

Woodle said Lawrence did not know he was under church investigation until two weeks ago while he was in reconciliation talks with Episcopal Presiding Bishop Katharine Jefferts Schori, and most of the rectors in the 29,000-member diocese did not know about the decision to secede until the announcement was made.

Similar charges were made against Lawrence last year, and he was exonerated. What makes these charges different are the disputes over who owns the church properties in the Diocese of South Carolina, said Joan Geiszler-Ludlum, chancellor of the Diocese of East Carolina, which is in North Carolina.

The national church's disciplinary board said that Lawrence had begun issuing quitclaim deeds to churches in his diocese in order to release the diocese and denomination’s legal claims on the properties.

The Diocese of South Carolina was the fifth diocese and among dozens of individual churches to leave the Episcopal Church in recent years over theological differences concerning the ordination of openly gay bishops.

Though theological tensions between the diocese and top Episcopal leaders have been increasing in the past decade, Woodle said the proverbial last straw for the diocese came when the national convention voted into canon law this fall a provision saying a church cannot consider a person’s transgendered status in employment matters.

While there was relief at Woodle’s parish over last month's split, there was some sadness and mourning across town at Trinity Church in Myrtle Beach.

But Boyd said he’s felt less and less welcome theologically “as a person of biblical conviction” at church conventions.

He also said there’s a risk of identity confusion within his church body. Are church members still Episcopal or something else? Even the new name of the new diocese could be confusing.

According to Geiszler-Ludlum, the affiliation of the individual depends on whether they decide to stay a member. About 10 years ago, when a Morehead City parish split from the Diocese of East Carolina and joined the Anglican Mission in America, she said parish leaders continued telling their members nothing would change; that they were still Episcopalian.

“But legally they weren’t,” she said.

As for Trinity and the Well By the Sea, both pastors said their parishes will likely stand behind Lawrence’s leadership.

“We’re trying not to focus on names here,” Boyd said. “But more than anything else, I think people are looking around the pews at the people around them and realizing that this is the church, no matter what we call ourselves.”

(Amanda Greene is the editor of Wilmington Faith and Values in Wilmington, N.C.) 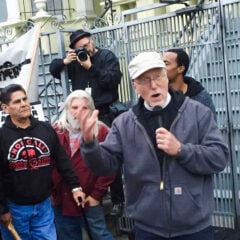 News
As workers seek to unionize, some clergy are filling a crucial role

News
Noem to headline GOP event in early-voting South Carolina
Follow us on Facebook!
Submit your photos to RNS