NEW ORLEANS (RNS) For nearly a decade, hundreds of local Boy Scouts have learned the virtues of the Ten Commandments on an annual Thanksgiving holiday hike to churches, synagogues and mosques, where clergy and scholars explained their faiths’ take on the ancient code. 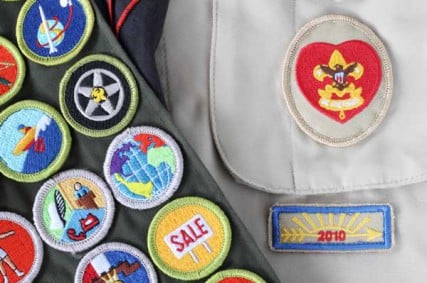 For nearly a decade, hundreds of Boy Scouts have learned the virtues of the Ten Commandments on an annual hike to local churches, synagogues and mosques. But this year, Touro Synagogue says it’s no longer willing to take part because the Scouts deny membership to gay troop leaders and gay adolescent Scouts. *Note: This image is not available to download.

But this year, Touro Synagogue, a major Reform congregation and a longtime partner, has told the organization it’s no longer willing to take part because the Scouts deny membership to gay troop leaders and gay Scouts.

For Rabbi Alexis Berk, who used to host the Scouts at Touro, it’s a clear justice issue that mirrors the civil rights struggle of a generation ago. She sees public dissent to Scouting’s membership policy as a moral duty.

Elsewhere around the country, Jewish organizations are similarly pushing back against Scouting’s membership policy, especially since July, when Scouting reaffirmed it after a two-year study.

“This position has taxed Scouting’s relationship with the Jewish community,” said A.J. Kreimer, chairman of the National Jewish Committee on Scouting. “Our committee’s motto since 1926 has been ‘Scouting Serves the Jewish Community’ — and that relationship has been strained.”

The decision from Scouting headquarters also distresses Alan Smason, the founder and engine behind the local Ten Commandments hike. Smason is a former Boy Scout, the father of a former Scout, and an advocate for Scouting. And he’s Jewish.

“My personal opinion is the Scouting policy in place now is wrong. They’re discriminating, and there’s no way to justify discrimination in this day and age,” Smason said.

The Scouts will have lunch at a Mormon meeting house. Islam does not have the Ten Commandments, but the Quran enjoins the same sins at various places throughout its text, said Rafiq Nu’man, a frequent project participant as imam of the Masjidur Rahim mosque.

Berk said she participated in past years despite her discomfort with the Scouts’ membership policy. That discomfort has been evident across the Reform Jewish landscape for years.

Support for qualified gay men and lesbians as Scout leaders was already full-blown in 2001 when the Religious Action Center of Reform Judaism recommended that Reform synagogues refrain from sponsoring Scout packs or troops.

Under internal and external pressure, the Boy Scouts of America reviewed its membership rules last year. In July, it announced that after a two-year internal study it would keep its policy:

“While (Scouting) does not proactively inquire about the sexual orientation of employees, volunteers, or members, we do not grant membership to individuals who are open or avowed homosexuals or who engage in behavior that would become a distraction to the (Scouting) mission.”

Deron Smith, the spokesman for Boy Scouts of America, said Scouting was not pursuing an agenda or making “social commentary.” Rather, he said Scouting had chosen to defer to what it sensed were the wishes of most Scouting parents.

“The vast majority of parents Scouting serves value their right to address issues of sex and sexual orientation within their family,” Smith said in an email. ”They do not sign their children up for Scouting to expose them to this topic.”

“Maybe it would be one thing if this were a long-standing policy and they’d never revisited it – but the fact that they freshly revisited it and rendered a freshly bigoted opinion, well, I freshly feel like I can’t participate,” she said.

“I can’t participate in religious experience that uses religion as a hook on which to hang bigotry.”

(Bruce Nolan is a contributing writer for the Times-Picayune in New Orleans).