(RNS) A public watchdog group is charging the U.S. Conference of Catholic Bishops with openly politicking on behalf of Republican presidential candidate Mitt Romney and it wants the Internal Revenue Service to explore revoking the hierarchy’s tax-exempt status. 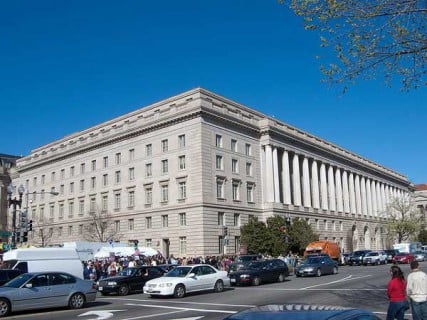 Internal Revenue Service headquarters building in Washington, D.C. *Note: Due to copyright laws, RNS can not offer the downloadable version of this image. To download, please go to the link above.

“In completely unqualified terms, the IRS should immediately tell the Conference of Catholic Bishops that the conduct of its members is beyond the pale,” said Melanie Sloan, executive director of Citizens for Responsibility and Ethics in Washington (CREW).

“If the Catholic bishops would like to continue receiving the tremendous tax benefits on which they rely, they should follow U.S. law and stay out of American politics,” Sloan added in a statement last Friday (Nov. 2) announcing the complaint.

Sloan argued that last-minute appeals by numerous bishops had crossed the line into electioneering. She named several prelates, including Bishop Daniel Jenky of Peoria, Ill., a fierce critic of President Barack Obama, who ordered his priests to read a letter at all Masses on Sunday that sharply criticized Democratic policies and warned that Catholics who voted for those policies would endanger their eternal salvation.

Though the complaint targets the bishops' conference, the conference itself has no control over what individual bishops do or do not say. While the USCCB has been waging a fierce political battle with the Obama White House over a contraception mandate, it has been careful not to endorse either candidate.

The bishops under scrutiny deny they are being partisan, and say they are only stating Catholic teaching and pointing out that Democratic policies violate those teachings.

Complaints to the IRS about the Catholic Church are relatively infrequent; church-state watchdogs have generally targeted evangelical churches and other groups associated with the Christian right for violating laws on politicking from the pulpit.

The Freedom From Religion Foundation (FFRF), a secularist group based in Madison, Wis., on Monday announced that it had filed a report with the IRS charging evangelist Billy Graham’s ministry with campaigning on behalf of Romney.

The aging Graham, who turns 94 the day after the election, surprised many observers last month by pledging to “do all I can to help” Romney. The Billy Graham Evangelistic Association subsequently took out full-page newspaper ads in which Graham strongly urges believers “to vote for candidates who support the biblical definition of marriage between a man and woman, protect the sanctity of life and defend our religious freedoms.”

“The context of the ads and publications by BGEA evidence its intent to endorse candidate Mitt Romney,” FFRF co-president Annie Laurie Gaylor wrote in an Oct. 31 letter to the IRS.

The complaints may be moot, however. The Associated Press reported last week that a senior IRS official said the agency has not investigated any houses of worship over political complaints in three years, an assertion supported by many experts in the field.

“The impression created is that no one is minding the store,” Melissa Rogers, a legal scholar and director of the Center for Religion and Public Affairs at Wake Forest University Divinity School in North Carolina, told the AP. “When there's an impression the IRS is not enforcing the restriction — that seems to embolden some to cross the line.”