SALT LAKE CITY (RNS) Mormons in Utah and across the nation were thrilled by the prospect that one of their own might occupy the highest office in the land. 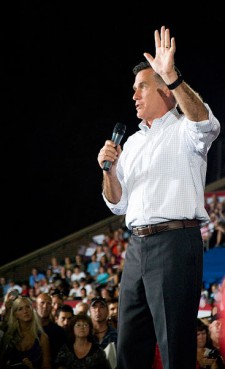 That won’t happen now. But Mitt Romney came closer than any other Latter-day Saint since that once-beleaguered brand of Christianity burst onto the American scene in 1830.

“For many Latter-day Saints, it was a surprise that a Mormon candidate was able to make it as far as Mitt,” said Stuart Reid, a Mormon and a Republican state senator from Ogden, Utah. “He’s done more than any single person in recent church history to share with the general public what a Mormon is, putting up a very positive image about Mormons and creating interest in our faith that was unprecedented.”

Despite the defeat for Romney, Mormonism came out a winner, said Philip Barlow, chair of Mormon history and culture at Utah State University.

“It developed a thicker skin in the eyes of the world,” Barlow said, “and the world could see that a Mormon who runs for office isn’t, by definition, a nut case.”

Overall, most observers say, the Romney candidacy was a net positive for his Utah-based faith.

“There's been a lot of tough talk about Mormonism here and there in corners of the press,” he said. “But that has given Mormons the chance to talk back and and explain themselves. Overall, in terms of just making the population aware of Mormonism and knowing a little bit about their lives, it has been positive.”

Bushman and other Mormons said that even though Romney did not talk often about his church, his candidacy offered other Mormons the opportunity to share their faith with friends, co-workers and the media.

The LDS church’s governing First Presidency and Quorum of the Twelve Apostles issued a statement late Tuesday (Nov. 6) congratulating President Obama and commending Romney for “engaging at the highest level of our democratic process which, by its nature, demands so much of those who offer themselves for public service.”

“This is now a time for Americans to come together,” the statement from Mormon leaders said. “It is a long tradition among Latter-day Saints to pray for our national leaders in our personal prayers and in our congregations. We invite Americans everywhere, whatever their political persuasion, to pray for the president, for his administration and the new Congress as they lead us through difficult and turbulent times.”

Romney’s bid focused attention on Mormonism, which helped bring the Church of Jesus Christ of Latter-day Saints into the mainstream of American religion, says Jan Shipps, a Methodist and a leading expert on LDS history.

But being better known “may not be entirely positive, just different,” she said. “Once a church loses its minority status, it may not be as protected as it once was.”

The Mormon factor might have become more difficult, Shipps said, under a President Romney.

“During a campaign, he can blame his advisers for his lies or misrepresentations,” she said, “but once he’s in the White House, he’d become more responsible for everything he says and does than any candidate.”

The campaign may have educated more Americans about Mormonism, but it didn’t change overall attitudes, said David Campbell, an LDS political scientist at the University of Notre Dame. Perceptions of Latter-day Saints are “not driven by politics or by news coverage of Mormons. It is driven by personal relationships with Mormons.”

Still, Romney’s run did alter some views: He won nearly the entire Bible Belt, dominated by evangelical Christians who long have been suspicious of Mormonism and critical of LDS theology.

“Right now, attitudes toward Mormons are sharply divided along partisan lines,” Campbell said. If Romney were president, those partisan views could be “baked into the American political psyche … (which would be) unhealthy for Mormons as a group, for religious tolerance, and for the Republican and Democratic parties.”

Romney’s loss “may be a blessing for Mormons concerned about further public scrutiny of their faith,” said Utah Valley University administrator Brian Birch. “A Romney presidency would almost certainly have kept Mormonism under the microscope for many years to come.”

Matthew Jorgensen, an LDS scholar on a research fellowship in Germany, worried that a Mormon president would have put his fellow believers, including missionaries, at risk across the globe.

“If Mitt Romney (offended) radical Islam,” he wrote in an email, “then Mormons all over the world could become the target of terrorism in response to some offhand comment.”

There were several cringe-worthy moments during Romney's campaign, said Scott Gordon, a college instructor from California, such as when evangelical leaders held an anyone-but-Mitt meeting in Texas last January. But there were also historic highs, he said, such as the Billy Graham Evangelistic Association scrubbing language from its website that referred to Mormonism as a “cult.”

“Whether or not Gov. Romney was the best candidate, it's been heartening to see people of different faiths support someone of my faith,” said Gordon said, who is president of the Foundation for Apologetic Information & Research, a Mormon group that aims to counter public criticism of the church.

Bushman said that even negative aspects of the “Mormon moment” bore positive results.

“So many times people cover up real questions about Mormons by trying to be polite,” he said. “Bringing them out makes it possible to deal with them and lead to a better conversation down the line.”