NEW DELHI (RNS) As the 18th congress of China's Communist Party began in Beijing this week, six more Tibetans set themselves on fire as Tibetan leaders say they are powerless to stop a growing wave of self-immolations. 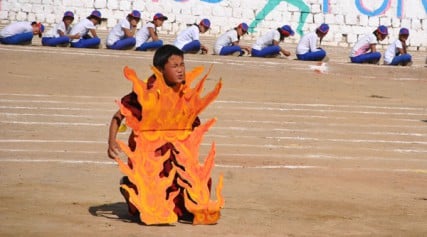 A Tibetan boy enacts self-immolation in Dharamsala, India, as part of a public event.

In fact, exiled Tibetan political leader Lobsang Sangay said that while he highly discourages the drastic action, it is the “sacred duty” of the exiled community to support it.

“We have made so many appeals (to stop self-immolations), but they are still doing it,” said Sangay, the political successor of the Dalai Lama, as the number of self-immolations by monks, nuns and others swelled to 68 since March 2011.

The day before Beijing opened its party conference on Thursday (Nov. 8) to choose new leaders, three monks, a man, a woman and a teenager drank gasoline and set themselves ablaze, according to tibet.net.

Sangay, a former scholar at Harvard Law School, said he has always maintained that Tibetans inside Tibet should not protest because of harsh consequences. Exiles, however, are a different story.

“But once a protest takes place, it becomes our sacred duty to support it,” he recalled saying when he was sworn in as the prime minister of the Tibetan government-in-exile in Dharmsala, India, on Aug. 8, 2011. “I take the same stand on self-immolations.”

The Tibetan leader said the world needs to focus on the cause behind the act, not just the act itself.

“Self-immolators are telling the Chinese government that repression is unbearable. They are saying, 'We grew up under under your system, we are supposedly the primary beneficiaries of whatever you are doing in Tibet, and it's not good; it's not worth living under the system.'”

Sangay added he does not try to “venture into Buddhist philosophy” to explain self-immolation, but views it as “a form of protest  … like the monks who self-immolated during the Vietnam war, and the self-immolation in Tunisia that was the catalyst for the Arab Spring.”

However, there is a religious element, he agreed. “They have not harmed Chinese people, offices or shops because they are Buddhist and part of a non-violent movement.”

Beijing, which has claimed Tibet as part of China since it overtook the country in 1959, has accused Tibetan exiles and the “Dalai clique” of encouraging self-immolations.

“These Tibetans have not met the Dalai Lama, they have never met me. To accuse us of promoting it is unimaginable,” Sangay said, adding that self-immolations might continue “until the situation improves.” 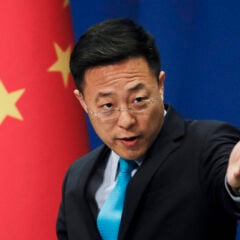