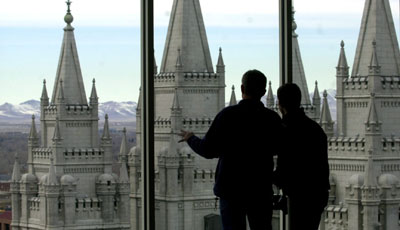 The 2012 presidential campaign put Mormons and their Church of Jesus Christ of Latter-day Saints under an intense media spotlight. Mormonism was analyzed, criticized, praised, appreciated, and misunderstood in a deluge of articles, blogs, television shows and opinion pieces.

MormonVoices, a subsidiary of the Foundation for Apologetic Information and Research, kept a steady eye on the voluminous coverage, offering both praise and criticism. As we try to make sense of the “Mormon moment,” Religion News Service asked Mormon Voices to collect examples of the media at its best and worst.

To be clear, the views expressed below belong to FAIR, not Religion News Service. On Thursday we’ll post the Ten Worst stories about Mormonism, so stay tuned. And please feel free to offer suggestions of stories to consider in the comments section below.

The Ten Best Stories About Mormonism

(1) Naomi Schaefer Riley wrote an in-depth piece for Philanthropy Roundtable, investigating and explaining the Mormon welfare system and its importance in Mormon practice. Riley acknowledged the political connection to her story, but spent much more time communicating details about the welfare system and included several Mormon points of view. Riley’s piece is an excellent contribution to a thorough, in-depth understanding of Mormonism that many news stories lacked.

(2) Joel Kotkin, whose academic expertise in urban development is reflected in his journalism analyzing demographic and sociological trends, added substantially to understanding of Mormonism. His reporting included historical background, but focused much more on Mormons’ participation in society and politics without being sidetracked by obscure controversies that have little to do with Mormons’ everyday lives.

(3) NBC’s Rock Center, hosted by Brian Williams, devoted an entire prime-time program to Mormon belief and practice. Though some Mormons noticed a few inaccuracies, and took offense to the portrayal of sacred Mormon garments, many were also appreciative of the program’s overall even-handed and respectful tone. NBC clearly attempted, and mostly succeeded, to portray Mormons accurately, relevantly, and respectfully.

(4) David French is an opinion journalist and activist who headed the group Evangelicals for Mitt, and his coverage of Mormons was directly to a specifically evangelical audience. French makes clear that Mormon theology and his own Calvinism have important differences, but he also conveyed the true and even mundane details of Mormon practice to those who may have heard inaccurate accounts.

(5) The BBC went directly to the source to find out how Mormons think and act. They assembled a panel of Mormon church members in Salt Lake City and facilitated a wide-ranging discussion that produced several interesting insights. This good example was a stark contrast to other BBC offerings, which skipped even-handed reporting in favor of controversy.

(6) Coverage of the “Mormon moment” also included reporting how non-Mormons reacted to Mormons. Thomas C. Terry’s article in Inside Higher Ed explained several instances of bias against Mormons among academics and analyzed the implications of the separation between scholarly circles and most Mormons.

(7) In the Catholic journal First Things, Stephen H. Webb ensured that a vitally important but often-overlooked facet of Mormonism was insightfully explored: in his words, “Mormonism is obsessed with Christ.” Webb reads and explains the Book of Mormon, focusing not on a few phrases that can be related to political preoccupations, but showing its overall purpose.

(8) When Broadway put Mormon missionaries at the center of a popular show, “The Book of Mormon,” most audience members were no doubt smart enough to separate satire from realism. But would audience members be able to find any realistic sources to help them better appreciate the inside jokes? The New York Times filled this void with a lengthy account of actual Mormon missionaries serving in Uganda. The first-hand look into the missionaries’ words and actions is a valuable source for anyone interested in the young men behind the spoof.

(9) Mormon temples received a great deal of curiosity and speculation, which is natural considering their sacred rituals are not open to non-Mormons. Danielle Tumminio, an Episcopal priest, attended a temple “Open House,” wherein the public are allowed to tour a temple in its entirety prior to its dedication and closure to all but Mormons in good standing. Her analysis, while positive and even enthusiastic about the spiritual aspects of her visit, is praiseworthy more because it considered what temple worship means to Mormons.

(10) McKay Coppins of Buzzfeed and Peggy Fletcher Stack of Salt Lake Tribune are practicing Mormons. This gave them the opportunity to publish several articles demystifying Mormon belief and practice for an unfamiliar public. Their familiarity and thoroughness probably couldn’t have been duplicated by a non-Mormon reporter’s conversation with a few sources. Of course not all reporting on a religion can be done by its adherents, but as Mormon scholar Joanna Brooks suggested, much reporting on Mormons could be vastly improved with one simple step: a Mormon fact-checker.