BALTIMORE (RNS) The Catholic bishops gathered here for their annual meeting couldn’t agree on a statement on the economy on Tuesday morning (Nov. 13), but with a unanimous voice vote that afternoon they easily backed a measure to push sainthood for Dorothy Day, whose life and work were dedicated to championing the poor. 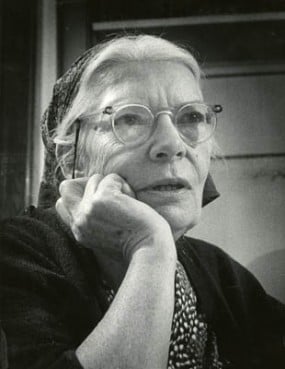 Dorothy Day founded the Catholic Worker Movement in 1933 and became what
many consider to be an American saint. She is seen here in 1968.

Indeed, it was a remarkable moment for the reputation of Day, one of the most famous figures in 20th-century Catholicism.

Born in Brooklyn in 1897, Day lived a bohemian life in New York City in the 1920s while working as a leftwing journalist. She endured a failed marriage, a suicide attempt, and had an abortion when suddenly, after the birth of her daughter, she converted to Catholicism.

That decision confounded her literary friends but launched her on a new path of activism and piety.

In 1932, Day founded the Catholic Worker movement with Peter Maurin, and became a radical, if often polarizing, voice for pacifism and social justice until her death in 1980.

The bishops’ vote formally asked the Vatican to continue the canonization process that was launched in 2000.

“She was a very great personal help to me when I was a young priest,” said Bishop William F. Murphy of Rockville Centre, N.Y. “To be able to stand here and say ‘yes’ to this means a great deal to me.”

Yet if Day had a lasting impact on the church and on those who met her, she was also controversial precisely because of her compelling life story and her outspokenness. Her libertine lifestyle before her conversion still gives some pause, and she was blasted for being a pacifist during World War II and a lifelong sharp critic of capitalism.

It is a legacy of seeming contradictions that endures today as different people find different things to like about Dorothy Day.

Chicago Cardinal Francis George, who met Day after John F. Kennedy’s election in 1960 – an election she characteristically dismissed as having no benefit for the church – drew applause on Tuesday as he promoted Day’s canonization by enlisting her in the bishops’ battle against the Obama administration’s contraception mandate and endorsement of gay rights.

“As we struggle at this opportune moment to try to show how we are losing our freedoms in the name of individual rights, Dorothy Day is a good woman to have on our side,” George said.

Next up was Boston Cardinal Sean O’Malley, who instead highlighted Day’s “commitments to the social gospel of the church and her love for the poor.” Those “are things that resonate with our young people,” he said.

In his remarks, Dolan sought to connect the two poles of Day’s reputation, noting that since both conservatives and liberals often find much to love, and sometimes loathe, in Day’s life, “I’m more convinced than ever that she’s a saint for our time.”

The real problem, however, may not be what others say about Day, but what Day said about herself.

“Don’t call me a saint,” she has famously been quoted as saying. “I don’t want to be dismissed so easily.”

Some of Day’s most ardent followers cite that passage as evidence that she herself would not want to be canonized, and would certainly prefer that the money needed for such a lengthy process be used for the poor.

But Robert Ellsberg, the publisher of Orbis Books and the editor Day’s journals and letters, said Day herself was devoted to the saints.

“What Dorothy certainly opposed — and what saint wouldn’t?– was being put on a pedestal, fitted to some pre-fab conception of holiness that would strip her of her humanity and, at the same time, dismiss the radical challenge of the gospel,” Ellsberg told America magazine.

The thought of such praise made Day uncomfortable because it obscured how difficult it was to live such a radical life — for her or anyone else.

“As is the case with all saints,” said Ellsberg, “it is her very humanity that makes her such a compelling model.”

News
Carlo Acutis, millennial candidate for sainthood, draws 41,000 to Assisi church
News
Black skeptics find meaning in uplifting their community through social justice
News Analysis
The top three faith moments in the Harris-Pence vice presidential debate
Signs of the Times
Election checklist: Five ways Catholic parishes can keep politics out of church
Opinion
Calling all women: It’s time to take our stand together against tyranny and injustice
© Copyright 2020, Religion News Service. All rights reserved. Use of and/or registration on any portion of this site constitutes acceptance of our User Agreement and Privacy Policy, Privacy Statement and Cookie Notice. The material on this site may not be reproduced, distributed, transmitted, cached or otherwise used, except with the prior written permission of Religion News Service.