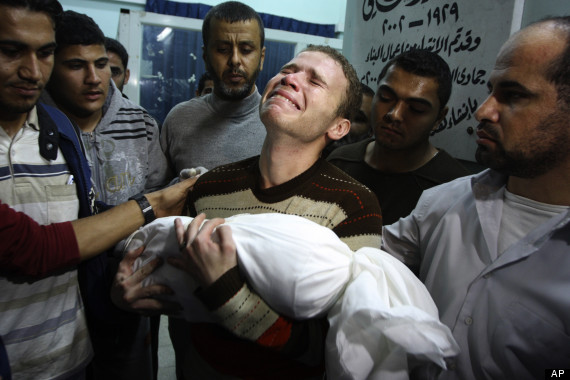 Here is what is actually happening on the ground:

“According to the Palestinian Centre for Human Rights (PCHR) report on Sunday November 11, five Palestinian civilians including three children had been killed in the Gaza strip in the previous 72 hours, in addition to two Palestinian security personnel.

Four of the deaths occurred as a result of Israeli military firing artillery shells on youngsters playing soccer. Moreover, 52 civilians had been wounded, of which six were women and 12 were children.”

The “official” narrative, spun by the Israeli military and taken up wholesale by US corporate media, portrays the Israeli attacks as a “response” or “retaliation” against earlier Palestinian rocket attacks.      Here are four facts that are being deliberately and willfully neglected in the current coverage of this Israeli assault.   It is imperative to consider these as a corrective to the campaign of media misinformation.

1)     The Israeli “response/retaliation” narrative is a myth.
This myth is a common one that depicts Israeli aggressive actions against Palestinian civilians always and only as a justified “retaliation.”    What this narrative leaves out is the broader context, one that goes back to the illegal Israeli occupation of Gaza, the economic choking of Gaza that has resulted in a 50% unemployment rate, and a deliberate Israeli policy of actually starving Palestinian civilians to death.

What this “retaliation” narrative also leaves out is the much more recent history, including Israeli attacks on Gaza in November that preceded any Palestinian rocket attacks.

Given the vast amount of misinformation and the deeply entrenched nature of the “retaliation” myth, I am going to quote this timeline in full, which shows how over the last week it was actually Israeli forces that invaded Gaza and escalated the crisis.   Jadaliyya has a thorough listing of these Israeli attacks.

SATURDAY, NOVEMBER 10
An anti-tank missile fired by Palestinian fighters wounds four Israeli soldiers driving in a jeep along the Israel-Gaza boundary.
An Israeli artillery shell lands in a soccer field in Gaza killing two children, aged 16 and 17. Later, an Israeli tank fires a shell at a tent where mourners are gathered for a funeral, killing two more civilians, and wounding more than two dozen others.

SUNDAY, NOVEMBER 11
One Palestinian civilian is killed and dozens more wounded in Israeli attacks. Four Israeli civilians are also injured as a result of projectiles launched from Gaza, according to the Israeli government.
During an Israeli government cabinet meeting, Transportation Minister Yisrael Katz urges the government to “cut off the head of the snake… take out the leadership of Hamas in Gaza.” He also calls for a cutting off of water, food, electricity, and fuel shipments to Gaza’s 1.7 million people.

WEDNESDAY, NOVEMBER 14
Israel breaks two days of calm by assassinating Ahmed Jabari, the head of Hamas' military wing. According to reports, at least eight other Palestinians are killed in Israeli attacks, including at least two children. Palestinian militant groups vow to respond.

Needless to say, these attacks are uniformly ignored in US corporate media, including New York Times.

2)   Palestinian Civilian casualties are not covered.
As the Israeli bombs continue to fall on Gaza, much of the American media speculation focuses on the Palestinian rockets, which while reprehensible caused no Israeli deaths.     What is not covered is the loss of human life and injury that Israeli attacks have already caused in Gaza.  It is these types of images (to the right) that we are not often seeing, and will likely not see, in American media.

As many have documented before, there is a vast asymmetry in the way American media covers Israeli and Palestinian loss of life.
This asymmetry shapes the way in which most Americans come to view the Palestinian/Israeli conflict.

Here are images that we in the United States do not see on our mainstream media.

Here is Jihad Mashrawi, who works for BBC Arabic services in Gaza, holding his martyred one-year-old son who was killed by the Israeli attack.
Where is the American coverage of Mashrawi?
Where is the outrage over the murder of a one year old?   Was this one-year old a terrorist?

These images, and more, are from here.

Here is an image of one of the Palestinian children killed by Israeli bombs.
What is the response of the American establishment to this child?  What is our response?
What word does the murder of a child deserve other than terrorism?

“We stand by our Israeli partners in their right to defend themselves against terrorism.”

Will the American government merely serve to parrot what Israeli military officials say?
Will American media outlets ask the US spokesperson if the US will stand with Israel as Israeli bombs kill Palestinian children?

Here was the fuller US response:

“We strongly condemn the barrage of rocket fire from Gaza into southern Israel, and we regret the death and injury of innocent Israeli and Palestinian civilians caused by the ensuing violence,” the statement said. “There is no justification for the violence that Hamas and other terrorist organizations are employing against the people of Israel. We call on those responsible to stop these cowardly acts immediately.”

The American response continues to be one of “condemning” Palestinian attacks, but remaining silence in face of Israeli atrocitis.
Why the double speak?
Are the Palestinian lives worth any less than Israeli lives?
Are they the children of a lesser God?

What’s so hard about saying it loud and proud:  we condemn any attacks on civilians, anywhere, by any one, to any one, under any circumstance.

Not only would that stance be morally righteous, it would also begin to restore American moral credibility in the international stage, something that has been vastly eroded to a large extent due to a one-sided US support for Israel.

At least the French issued a morally even-handed response:
“France is extremely concerned by the deterioration in the situation in Gaza and in the south of Israel… (and) calls on both parties to refrain from any escalation of violence,” a Foreign Ministry spokesman said.  [Through AFP]

The call has also been echoed by the United Nations:  The secretary general Ban Ki-moon “calls for an immediate de-escalation of tensions.”

4)  This Israeli assault is hurting US standing in the Middle East
There is little denying that at least one part of the Israeli assault is about Netanyahu asserting his warmongering, aimed squarely at President Obama.
Granted, President Obama has not been a meaningful participant in the peace process, and actually obstructed the Palestinian bid for statehood.
Nevertheless, Netanyahu has made no secret of his disdain for the President, and had done more than any other foreign head of state to sway the US elections towards his old friend Mitt Romney.

Many had hoped that in his second term, President Obama would finally be able to make meaningful moves towards a just peace settlement in Palestine/Israel.
The Israeli assault seems like a cold-hearted and brutal pre-planned event to push the United States into an ever-tighter embrace with Israel precisely at a time that evenhanded and judicious discernment is needed to move from a one-sided support to a meaningful and lasting peace settlement.

More important, however, is the response of the Egyptians.
Israel has relied for decades on a peace treaty with Egypt.
However, the response of the new Egyptian President Mohamed Morsi, indicates that this Israeli assault may well cost the US yet another important ally in the region.

Morsi’s party, the Freedom and Justice Party, has issued the following statement:

Israel's return to the policy of assignation of leaders from the Palestinian struggle groups shows that the Israeli occupation wants to drag the region towards instability.
But the occupying state has to understand that the changes the Arab region, and especially Egypt, have witnessed will not permit that the Palestinian people be put under the hold of the Israeli offence in the same way as the past.

Now more than ever, the United States is in need of working with regional allies to achieve peace, precisely at a time that the world community is rapidly moving away from unipolar politics.
Our one-sided and fanatic support of Israel undermines those essential countries, like Egypt and Turkey, whose populations unambiguously call for a just and meaningful peace between Palestinians and Israelis.

For background information on Gaza, readers are invited to consider this informative site.

For those who wonder what the voice of people in Gaza may sound like these days,
I suggest this spoken word performance from Rafeef Ziadah, a brave and courageous Palestinian woman.

Is that the voice of every Palestinian?  No, but it is the voice that we need to heed today, the voice of all those who teach life.

May there be a better future for all the Palestinians, all the Israelis, and all of us who teach life.
May that better future be here now, and may we be participants in making it so.

Many of the images are from here.

News
ADL study: Violence against Jews doubled last year
Opinion
How Title IX exemptions force LGBT students to suffer in silence
News
Anti-Muslim hate crimes spike in Britain
rns-ee-migration
Palestine Vote at the United Nations–and why the United States is on the “Wrong Side of a Worldwide Revolution of Values” (MLK)
rns-ee-migration
Saudis say No to the Prophet Muhammad, Yes to Paris Hilton
© Copyright 2020, Religion News Service. All rights reserved. Use of and/or registration on any portion of this site constitutes acceptance of our User Agreement and Privacy Policy, Privacy Statement and Cookie Notice. The material on this site may not be reproduced, distributed, transmitted, cached or otherwise used, except with the prior written permission of Religion News Service.