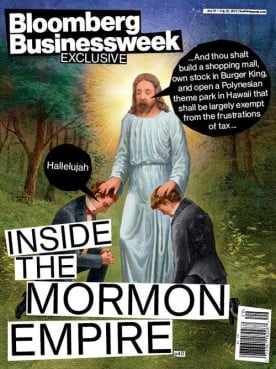 On Monday we brought you the 10 best stories about the “Mormon moment,” courtesy of MormonVoices, a subsidiary of the Foundation for Apologetic Information and Research. The foundation aims to counter public criticism of Mormonism, a job that kept them extremely busy through the recently ended presidential campaign.

To reiterate, the views expressed below belong to MormonVoices, not to RNS, and we would be happy to hear your thoughts and comments on the list.

(1) In September, Mormon blogger David Twede was summoned by local church leaders for excommunication proceedings. The Daily Beast ran a story accusing the church of orchestrating Twede's punishment in retaliation for his criticism of GOP presidential nominee Mitt Romney, with the implication that the church was willing to act in behalf of a political campaign. In follow-up stories by The Salt Lake Tribune and The New York Times, Twede acknowledged that Romney was probably not the reason behind the discipline, and that the church had ample, non-political grounds to be concerned about his membership.

(2) Two articles are combined here to illustrate a single problem: reporters often try to communicate greater familiarity than they actually have with Mormonism. Jodi Kantor of The New York Times attempted to provide insight in to Romney's candidacy by delving into his Mormon beliefs. The results left many Mormons scratching their heads, as several telling details in her story were incorrect. Worse, Gary Willis in The New York Review of Books relied on his memory of a past encounter with a Mormon to establish faulty conclusions about Mormonism.

(3) In Business Insider, editor Henry Blodget relied on a single source, Jon Krakauer's book “Under the Banner of Heaven,” to buttress his negative portrayal of Mormonism. Krakauer, however, is more sensationalistic than scholarly, presents as fact what is actually only slim conjecture.

(4) The blogger Andrew Sullivan, in the name of transparency, posted a video of a secret recording of Mormon temple rituals. Mormons consider it extremely insensitive and sacrilegious to portray the ceremonies outside of the temple. Sullivan's implication seems to be that Mormons are alien and irrational. But the fact that most modern religions do not include esoteric ceremonies does not mean that such ceremonies must, by definition, be sinister.

(5) Ex-Mormon Tricia Erickson has been roundly criticized by many Mormons for her outlandish portrayal of the church. Her writing mixes a few facts, poorly sourced historical stories, and a certainty that Mormonism is plain evil. But CNN repeatedly allowed her a platform, and though they at least allowed respected Mormon scholar Richard Bushman to respond to some of her claims, news organizations would have done well to avoid her entirely.

(6) Lawrence O'Donnell deserves great credit for apologizing to Mormons, but he had a great deal to apologize for. His comments on his MSNBC show claimed that Mormonism grew out of founder Joseph Smith's desperation to cover up an illicit affair. This isn't even a rational conjecture, given the actual sequence of events in Smith's life.

(7) Fred Karger ran for the GOP presidential nomination but never gained much support. Much of the coverage of his campaign focused on Karger's attempt to discredit the Mormon church for its role in California's Proposition 8 vote. That's fine as far as it goes, but several reporters and publications allowed Karger's charges to run unchallenged. For instance, Karger says that the Mormon church “pled guilty” to “13 counts of election fraud” after Proposition 8. This statement is wrong. The unintentional failure to fully comply with California election regulations is certainly not the same thing as criminal fraud, and it is malicious of Karger to say so.

(8) The Book of Mormon is more than 500 pages long. Understandably, many people want to know what it has to say but don't have the time to read it cover-to-cover. This does not lessen the damage done in reports that The Book of Mormon teaches and even encourages racism. In The Huffington Post, Dr. Obery M. Hendricks, Jr. failed to grasp that though The Book of Mormon describes peoples' skin darkening, that narrative has no relation to modern blacks and is not even a straight-forward tale of racism on its own terms. Moreover, though the Mormon church did not extend full priesthood to blacks until 1978, it is welcoming of all converts.

(9) Bloomberg Businessweek's Caroline Winter contributed important reporting on the Mormon church's financial practices. But the magazine's cover featured a mocking scene with an angel, who in Mormon history is said to have conferred sacred priesthood authority on early leaders, instructing the men to invest in crass business ventures. Moreover, it is legitimate to point out that the Mormon church owns commercial interests, but Winter made no attempt to understand this in terms of what options a large organization has for managing its finances, and what demographic and financial pressures the Mormon church might be preparing for.

(10) An opinion forum in The New York Times asked several contributors: “What Is It About Mormons?” Four out of the five had nearly nothing good to say about the faith, and seemed intent on exhibiting and perhaps instigating bias toward Mormons. Readers were told that the church is “smothering,” has a “dark side,” and has been on “the wrong side” of many political debates. Readers learned little about Mormons' own perspectives. 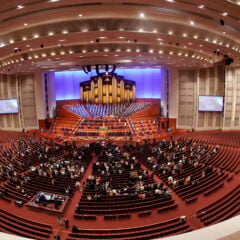