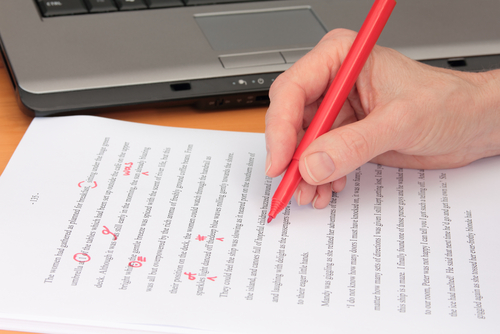 Last week in this five-part series, we looked at two things that authors should never say in a query letter: “God told me to write this book” and “I’m happy to do interviews.”

Here’s another: Don’t ever tell an editor or agent that your book is ready for publication, implying that it is perfect and does not require editing.
To illustrate what this might look like, here’s a portion of an actual query letter I received in late 2009. I’ve removed any specific information about the author and his project:

The attached manuscript submission is in its final draft, ready for publication. I intend to publish the book in March 2010 under my own imprint, but I wish to share this with you to see if it catches your eye. While I am prepared to self-publish, I remain open to graceful possibilities.

Contrary to my last email, I have decided not to send a proposal. A few moments with the manuscript should be enough to sell an editor with eyes to see. . . .

I know this is a bold request on my part, but this book is like a baby that needs to be born and I am looking for a stable.

There are so many things wrong with this query letter it’s difficult to focus on one, so here goes:

1. “This book is like a baby that needs to be born and I am looking for a stable.” Can we just say that as a general rule it’s a bad idea to compare your book to baby Jesus? (This query was received in mid-December, so I guess the author thought he was being seasonal.) Baby Jesus did not need editing. Mary didn’t send the bambino back and say, “Well, all the basic baby organs are in place, but his eyes are too far apart, he has redundant navels, and I’m not thrilled with the proposed Jesus title. Can you fix those problems in the second draft?” Those are the kinds of things an editor does. But when an author proclaims that a book is “in its final draft, ready for publication,” the author is imagining that having an editor is superfluous, because the book is already perfect. Real authors know they need editors.

2. “I have decided not to send a proposal.” (Read: “Ordinary rules do not apply to me. I am a genius, so I don’t have to follow the steps that lesser mortals do.”) This writer seemed to think that the formality of a book proposal existed merely to make his life difficult, and that the proposal was therefore an optional step. It isn’t. A book proposal exists so that an editor can quickly assess writers’ proposed projects and gauge the writers themselves, which is why there are whole sections devoted to platform, marketing, and target audience. If you don’t want to write a book proposal, that’s fine. Just don’t expect that you’ll make the leap from writing for yourself to working with a professional publishing house.

3. “A few moments with the manuscript should be enough to sell an editor with eyes to see.” It’s entertaining when authors assume that editors have nothing better to do than sit around sipping martinis and hoping against hope that someone might send them an entire manuscript to critique. Editors don’t have time to read whole manuscripts, people! Especially manuscripts that an author has already announced will most likely be published elsewhere. Between editors’ interminable meetings, the avalanche of emails, and all the projects already waiting in the queue, most are doing overtime as it is. Don’t insult them by imagining that they’re just dying to read your whole damn book and have the time to do so.

4. “I intend to publish in March 2010.” Well, bully for you. Be aware, however, that a traditional publishing house is not going to stop on a dime to release your book three months hence just because you think that would be nifty. Traditional publishing houses generally acquire books one to three years in advance, and sometimes beyond. Giving a prospective editor a timetable—particularly one with an impossible turnaround time—communicates that you have no earthly idea how publishing works.

I’ll spare you the unusually acidic rejection letter I sent this guy (I’m extremely kind with rejection letters in general). But as an update, he did decide to go with a traditional publisher, which put out the book a year after his query to me. As of now it does not have a single review on Amazon, and is ranked somewhere near the two-million mark in sales.

The editing image is used with permission of Shutterstock.com.

Faith
The best way to remember Mormon business leader Clayton Christensen? With small moral choices.
Flunking Sainthood
Second thoughts about the Mormon curriculum
Beliefs
5 Advent Devotionals
Clergy & Congregations
Hey, Mormon Woman! A No-Guilt Christmas Present
Ethics
Shopping for Jesus
© Copyright 2020, Religion News Service. All rights reserved. Use of and/or registration on any portion of this site constitutes acceptance of our User Agreement and Privacy Policy, Privacy Statement and Cookie Notice. The material on this site may not be reproduced, distributed, transmitted, cached or otherwise used, except with the prior written permission of Religion News Service.