Now, as this lighting-rod figure prepares to retire on Jan. 5, he’s leaving New Hampshire for a city that knows polarization all too well: Washington, D.C. 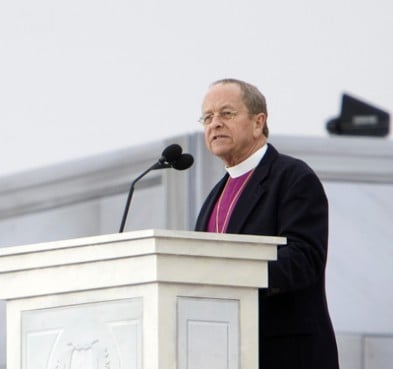 But rather than throw fuel on the culture wars, Robinson foresees a new role as a bridge builder for a nation strained by divisive issues. First up: helping his new church home, St. Thomas’ Parish in Dupont Circle, found a Center for Non-Violent Communication.

“Our big goal is to change the nature of the debate in Washington,” Robinson said during an interview at his Concord office. “We’re mostly shouting at each other these days. We’d like (the center) to become a place where people can learn about and commit themselves to a different kind of tone.”

Robinson, 65, is carving out multiple platforms for weighing in on national issues. He’ll be writing essays and doing public interviews as a senior fellow at the Center for American Progress, a left-leaning think tank. He’ll likely be preaching once a month in his expected role as bishop-in-residence at St. Thomas’, a congregation known for its advocacy on lesbian, gay, bisexual and transgender (LGBT) issues.

The cause of fostering civil dialogue won’t mean backing off hot-button issues, however. He plans to keep campaigning for coast-to-coast legalization of same-sex marriage, which is the topic of his new book, “God Believes in Love,” and a major theme in the recent documentary about his life: “Love Free or Die.”

Despite fighting for one side’s agenda, Robinson hopes to show how shared values and language can help diffuse tensions. He aims to model, for instance, how to translate religious views into secular policy statements that anyone could endorse.

“When you claim to have the truth, as opposed to the truth as you perceive it, then you move us toward a theocratic view of government,” Robinson said. “There is a better way of injecting religious belief and faith into the public debate, and it starts with a certain kind of humility.”

For Robinson, causes from gay rights to the environment and a robust social safety net fall under a single rubric: defending the vulnerable. That overarching principle, he hopes, will color each endeavor in his next chapter.

He’s already raised $500,000 for a new $6.3 million sanctuary at St. Thomas’, which was destroyed by arson in 1970, where a chapel will be named for him. He’s pitching the chapel as a pilgrimage destination, especially for gay teens who’ve never seen a Christian tribute to an openly gay person.

Yet no matter how he frames his retirement, observers say, he’ll be hard-pressed to reinvent himself as a transcendent or bridge-building figure.

His greatest promise for building bridges might be through private relationships out of the public eye, rather than in the high-profile roles that he’s lined up, according to Wendy Cadge, a sociologist of religion at Brandeis University.

“To go from being an activist, and from playing the central role that he has played in debates over homosexuality, to being someone who helps people … come together would be very difficult,” says Cadge, who studies mainline Protestant attitudes toward homosexuality. “But maybe he has some other idea for building relationships that we just don’t know yet.”

Those giving him a stage in Washington hope his stature and experience can help bring down barriers. But they concede it won’t be easy.

“Following the example of Jesus Christ is what’s important to us,” said John B. Johnson, the senior warden at St. Thomas’. “Gene has faced evil words (and) absolute anger with grace and poise. I can’t think of anybody better to help us navigate some of the harder conversations here in Washington and around the world.”

As he prepares to step down as Episcopal bishop of New Hampshire, Robinson looks every bit the bishop in his office, and not just because he wears a pectoral cross. The traditional bishop’s color of purple is everywhere: his clerical shirt, his watch face and even his watchband — all bear the monochromatic hue that says episcopacy.

The color will still suit him long after Jan. 5 since he’s a bishop for life. He plans to stay active in the church’s House of Bishops, and hopes to be involved in global Anglicanism, he says, “if I’m invited.” (He was barred when Anglicans gathered for their 10-year global summit at Lambeth, England, in 2008, but he stood on the perimeter in protest).

At first, Robinson will divide his time between Washington and New Hampshire since his husband still works in the Granite State. He’ll also travel and give talks, especially on college campuses.

“I say yes to virtually every conservative place that wants to talk,” Robinson says. “Young evangelicals (who know gays and lesbians) are trying to figure out whether they want to change their worldview and their religious view or not. I want to be right in the middle of that.”

But Robinson hopes to have impact far beyond the church as he takes aim at public policy and public discourse alike. So far, he’s getting a warm reception – at least among his allies.

To champion liberal policies “from a spiritual voice is really helpful for people with no faith at all,” said Sally Steenland, director of the Faith and Progressive Policy program at the Center for American Progress. “It helps them say: ‘Oh, I always thought (religious people) were a bunch of jerks. But hey, he’s not so bad.’”