(RNS) Another star of the CBS sitcom “Two and a Half Men” has gone rogue — but in a decidedly different direction than notorious carouser Charlie Sheen.

Actor Angus T. Jones — the “half” in the sitcom’s title — says in a new online testimony that he’s become a Seventh-day Adventist and loathes the “filth” produced by his raunchy show.

“You cannot be a true God-fearing person and be on a television show like that,” says Jones, 19, in a video posted online by Forerunner Chronicles. “I know I can’t. I’m not OK with what I’m learning, what the Bible says, and being on that television show.”

“Please stop watching it,” says Jones, who reportedly earns $350,000 per episode and has starred in the show since he was 10. “Please stop filling your head with filth.”

Nearly two years ago, the sitcom fired Sheen, who played Jones’ uncle, for “moral turpitude.” Sheen had been cycling through drug rehab centers and publicly lambasting the show’s producers. Angus T. Jones on the red carpet at the 38th People’s Choice Awards on January 11, 2012, at the Nokia Theatre in Los Angeles, California. The ‘Two and a Half Men’ actor — the ?half? in the sitcom?s title — says in a new online testimony that he?s become a Seventh-day Adventist and loathes the ?filth? produced by his raunchy show.

CBS and Warner Brothers, the show’s producer, did not immediately respond to requests for comment about Jones. “Two and a Half Men,” draws about 14.5 million viewers each week, a drop from Sheen’s era, but still third among network comedies.

In the video, and in another posted in October by the California-based Adventist Media Center, Jones describes his spiritual journey from a listless youth who experimented with drugs to a committed Christian who attends an SDA church in Los Angeles, takes evangelism classes and observes the Sabbath, like other Adventists, on Saturday.

Forerunner Chronicles is a video-based ministry led by Christopher Hudson, according to its Facebook account. A call to the ministry was not immediately returned.

In other Forerunner videos, Hudson rails against President Obama, denounces music artists like Rihanna and Jay-Z, and accuses the Vatican of trying to brainwash people through the 2009 movie “Angels and Demons.”

In his online testimony, Jones tells Hudson that “I love watching Forerunner Chronicles … the information is so great.” 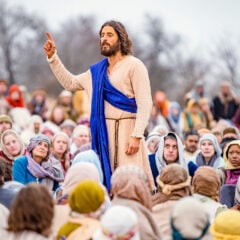