(RNS) After November’s presidential vote, Catholics could cite ample evidence for their renewed political relevance while dispirited evangelicals were left wondering if they are destined to be yesterday’s election news. Yet their roles in American spiritual life may be reversed.

New research shows that Catholics now report the lowest proportion of “strongly affiliated” followers among major American religious traditions, while the data indicates that evangelicals are increasingly devout and committed to their faith. 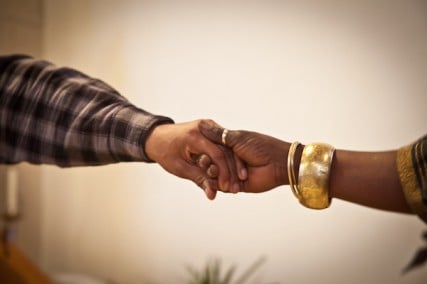 Parishioners hold hands while praying the “Our Father’ during Catholic mass at St. Therese Little Flower parish in Kansas City, Mo. on Sunday, May 20, 2012.

According to Philip Schwadel, a sociologist at the University of Nebraska-Lincoln, in the 1970s there was only a five-point difference between how strongly Catholics and evangelicals felt about their religion.

By 2010, he said, that “intensity gap” had grown to around 20 points, with some 56 percent of evangelicals describing themselves as “strongly affiliated” with their religion compared with 35 percent of Catholics. Even mainline Protestants reported a higher level of religious intensity than Catholics, at 39 percent.

“Sociologists have been writing about declines in mainline Protestantism for the last few decades,” said Schwadel, who details his findings in an article to be published in the upcoming edition of the journal Sociology of Religion. “The tremendous decline in Catholics’ strength of affiliation, though, was somewhat surprising.”

Exactly why these changes have been occurring is a matter of conjecture.

Schwadel noted that the decline in religious enthusiasm among Catholics began in the mid-1980s, and that coincided with the first revelations about the sexual abuse of children by clergy – a scandal that has haunted the church ever since.

Moreover, Latino Catholics are less likely to report a strong religious affiliation compared with other Catholics, and the number of Latino Catholics in the U.S. has been growing steadily in past decades.

At the same time, Schwadel noted that the surge in evangelical devotion to their faith began in the early 1990s and coincided with their growing presence in the public square. Other experts have noted that political battles can rally the faithful of a particular religious community, and even political losses can unite them in a shared sense of exile.

The changes in religious intensity that Schwadel found in particular religious groups contrasts with an overall stability in Americans’ religious views. Since the 1970s, about 37 percent of Americans have described themselves as “strongly affiliated” with their religion, with a brief spike to a high of 43 percent in the mid-1980s.

Among his other findings, Schwadel showed that African-American Protestants report a religious intensity level similar to that of white evangelicals – about 57 percent in 2010.

Schwadel did find one possible bright spot for Catholic leaders: Despite the steady erosion in the strength of religious affiliation among Catholics, it did not necessarily correlate to a decline in Mass attendance by younger Catholics.

“That could be seen as good news and bad news for the Catholic Church,” Schwadel said. “Younger Catholics are not being driven away from going to church, but they do still feel less strongly committed to their religion than they did a few decades ago.”

Schwadel culled the data for his report from nearly 40,000 responses to the General Social Survey from 1974-2010.